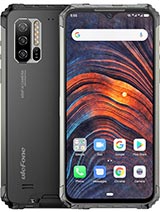 YUKI93, 11 May 2020Lol, dream on! I used to be a wireless guy until I had enou... moreYou bought a cheap wireless headset right? There is at least a 100€ price increase on the wireless section alone, try to aim for the 200-400€ segment, anything below will disappoint. 3.5mm is for cheap headsets or those you need good DACs for.

Sci, 18 May 2020Yeah, I would love to adopt wireless audio but there is one... moreI've used my sennheiser wireless 3 for 3 months now 10-12 hours a day. Battery is a s good a new, lasts about 14-18 hours depending on volume and noise canceling. I am sure you can find a way to replace the lithium cells when they start to degrade in about 3-7 years depending on use 😉

X, 28 Apr 2020When you go wireless you never go back. when you start caring about audio quality, you'll never go wireless.

May I know if buying this phone worth it compare to Blackview BV9900 pro or Doodgee S95 pro? Please assist if I'm going to buy this phone or not.

YUKI93, 11 May 2020Lol, dream on! I used to be a wireless guy until I had enou... moreYeah, I would love to adopt wireless audio but there is one massive problem, they are designed to fail. The battery is the failure point, and those little Lithium cells aren't long for this world. I'd be more inclined to adopt wireless over-ear headphones as just the space alone in the device will give the item a longer life span than their ear bud brothers. For reference, I've had my Sennheiser HD 598s for 7 years now and they still work fine, replaced the ear pads several times and the cables over time but the drivers themselves and the build of the headphones are still in working order. If they were wireless, they probably would have lasted half that time, and that's being generous.

After a few months of heavy use, the battery still lasts for 4 days. I was shooting a movie underwater. 2m deep in salt water and the phone still works without any problems.

X, 28 Apr 2020When you go wireless you never go back. Lol, dream on! I used to be a wireless guy until I had enough and went back to 3.5mm audio jack, definitely not regretting that decision at all!

silviurn, 05 Mar 2020When something seems too good to be true, it is! Mine broke... moreI've had mine for over a month now, no problem. You probably got a bad one.

silviurn, 05 Mar 2020When something seems too good to be true, it is! Mine broke... moreI'm going to buy one. But I'm from Sri Lanka. There is no agent in Sri Lanka for ulefone. So can someone tell me is it good phone.?

silviurn, 05 Mar 2020When something seems too good to be true, it is! Mine broke... moreYou should be able to claim it was defective from the start.

When something seems too good to be true, it is! Mine broke after 1 month of low use. It just won't start. the GSM service said that the processor is broken and the only fix is to change the motherboard.
Ulefone doesn't cover the motherboard and display with the waranty...

Dometalican, 22 Feb 2020Actually, for a mid-ranger, the P90 performs pretty well. S... moreI'm not a gamer and I'd definitley not game on it, but I do open or edit heavy files documents often, so processor speed is definitley something I need a powerful processor for, and so far my S10e is handling it like a champ.

Then MediaTek phones are known to be terrible with updates...

AverageUser, 22 Feb 2020So, the IP69K and drop protection rating are just amazing, ... moreActually, for a mid-ranger, the P90 performs pretty well. Sure, you can't game on it but that's DEFINITELY not what the phone was made for.

So, the IP69K and drop protection rating are just amazing, I love the LCD display since it means no Burn-in will happen... only CPU is disappointing

Headphone Jack... C'mon I don't want to worry if I charged my earbuds, I just want to leave them in the car when I leave the gym.

Everything is else is king slayer levels. The Helios CPU isn't as robust as the a SD, but... It is on difference pricing planet, and still competent!

[deleted post]I guess yes !
But let me tell you something, I had Armor 2 and it supposed to be waterproof but while I was shooting selfie photos in the water park, the water got inside the mobile phone and the screen get spoiled.