Today it's Verizon's turn to unveil what it has prepared for Black Friday, and it's great news if you're into Android smartphones. The carrier will offer up to 50% off on devices such as the Google Pixel 2 and Pixel 2 XL, Samsung Galaxy S8, S8+, and Note8, as well as the Moto Z2 Force.

You have to sign up for Verizon's unlimited plan and get the phone you want using monthly installments, but unlike other deals this one does not require a trade-in. It's "up to" and not exactly 50% off because Verizon will apply a fixed-amount $378 promo credit to your account over 24 months, regardless of how much the device you purchase is priced at. 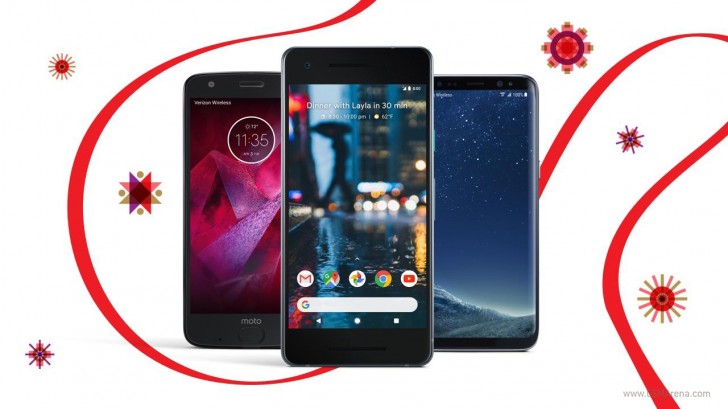 Additionally, you can pair your new handset with a 32GB iPad for $199 with a two-year contract (or just $99 when you buy an iPhone with installments). Alternatively, Verizon's own-brand Ellipsis 10 HD tablet can be yours for $29.99 with a two-year agreement if you grab it alongside one of the smartphones on offer.

The carrier is also giving you the chance to save $100 on select Android phones (with a retail value of $400 or more) when bought on device payment and activated on the unlimited plan. The $100 promo credit will be applied to your account over 24 months. Eligible devices for this deal include the Samsung Galaxy S6 and S7, Google Pixel and Pixel XL, LG G6, V20, and V30, Moto Z Force, Kyocera DuraForce Pro, Asus ZenFone AR, as well as the ones that are part of the "up to 50% off" promo mentioned above.

The deals will become available online on Thanksgiving Day, and in stores on Black Friday. Other things Verizon is offering: Google Home for $79.99, Home Mini for $29.99, Daydream View for $79.99, Chromecast Ultra for $54.99, $250 off any iPad with a two-year contract (or $300 off when you also buy an iPhone), $50 off Fitbit trackers, and even more savings on Bluetooth speakers and Nest products.

iPhone 8, Galaxy S8, LG G6, and Moto Z Force are free (with trade-in) at US Cellular this Black Friday

Alcatel Idol 5S and A30 discounted for Black Friday

Here are HTC's Black Friday deals in the UK

The pixel is fantastic. I would have got it had it had a smooth screen edge to frame feel like HTC A9 and others.

thanksgiving-no customer's black Friday-no customer is not calling they are all will call.

Don't worry folks after Black Friday these prices are more than likely to come back again. Android phones price cuts are always permanent.