Verizon opens up Galaxy S5 pre-orders, gives you two for $199

Finally hopping on the bandwagon after Sprint, AT&T, T-Mobile and US Cellular have all had their say, Verizon is offering the Samsung Galaxy S5 on pre-order.

The device will cost you $199.99 on a two-year deal, $599.99 sans commitment or for $25.55 monthly with Verizon Edge. Big Red also has an interesting side offer that may sway users from its rivals. When purchasing a Galaxy S5 with the carrier's 2 year deal you can also get another phone for no upfront cost (so long as you sign another 2 year deal). The second phones can either be another Samsung Galaxy S5, the freshly-announced ATIV SE or HTC One (M8). 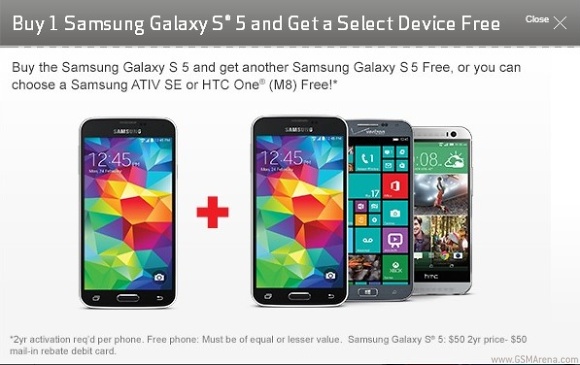 The Samsung Galxy S5 is expected to ship on April 11, just as with those other US carriers. Over the years we've seen devices ship a day or two early so you might get a bit lucky if you order now.

Hit the source link below for more information on Verizon's pre-order deal.

Please look back to who Verizon was as a company !!!! MCI WORLDCOM and look where the CEO Bernie Ebbers is now and his colleagues doing hard time for FRAUD 200 years. You think i am joking PLEASE DO YOUR HOME WORK, FACT. BR NOBBY

Widget images for mail, messages, phone and camera could do with a refresh. Android could really do with more stylish icons for these as they are really look dated like something of the 80's or entry level design that hasn't matured. Sony do a good j...