vivo sub-brand iQOO launched its first smartphone - back in March and now we are about to get the second one - vivo iQOO Neo.

The Chinese phone maker has teased the iQOO Neo on Weibo and shared a poster revealing its design. The iQOO Neo looks similar to the iQOO - it flaunts a waterdrop notch display on the front and a triple camera setup at the back which is placed vertically in the upper-left corner.

However, while the LED flash on the vivo iQOO is placed separately, the iQOO Neo has it on same plate as the multi-camera setup. 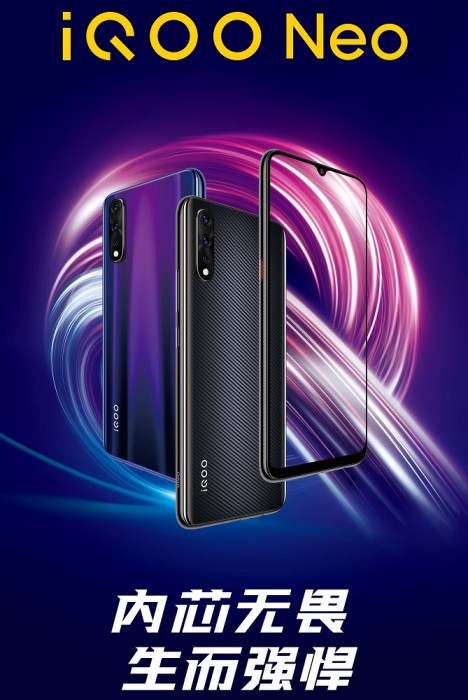 You can also see that the iQOO Neo has the power key and volume rocker on the right side, and there's an orange-colored button on the left which will be likely used to summon the company's digital assistant.

The iQOO Neo will be offered in at least two colors, Purple and Black, with the latter having a carbon fiber-like texture on its back. That said, the back of the smartphone doesn't have a fingerprint scanner, which means it will be likely embedded to the screen, which further implies that the smartphone will sport an OLED panel.

This poster of the iQOO Neo also shows a 3.5 mm headphone jack at the bottom which is sitting right next to what we hope is a USB-C port.

Last week we heard about the vivo iQOO Youth Edition coming with Snapdragon 710 and Snapdragon 845 SoC. It's currently unclear if the iQOO Neo and Youth Edition are same or two different devices, hence, we will have to wait until vivo sheds some more light on this matter.

Yeah, just taking a look at their product line showed me that. Literally every phone is the same