Looks are always going to be subjective, but it's hard to deny how slick and clean the vivo V21 is. This appears to be the pervasive design language across vivo's lineup, with the V21 line, in particular, taking after its X60 bigger siblings. 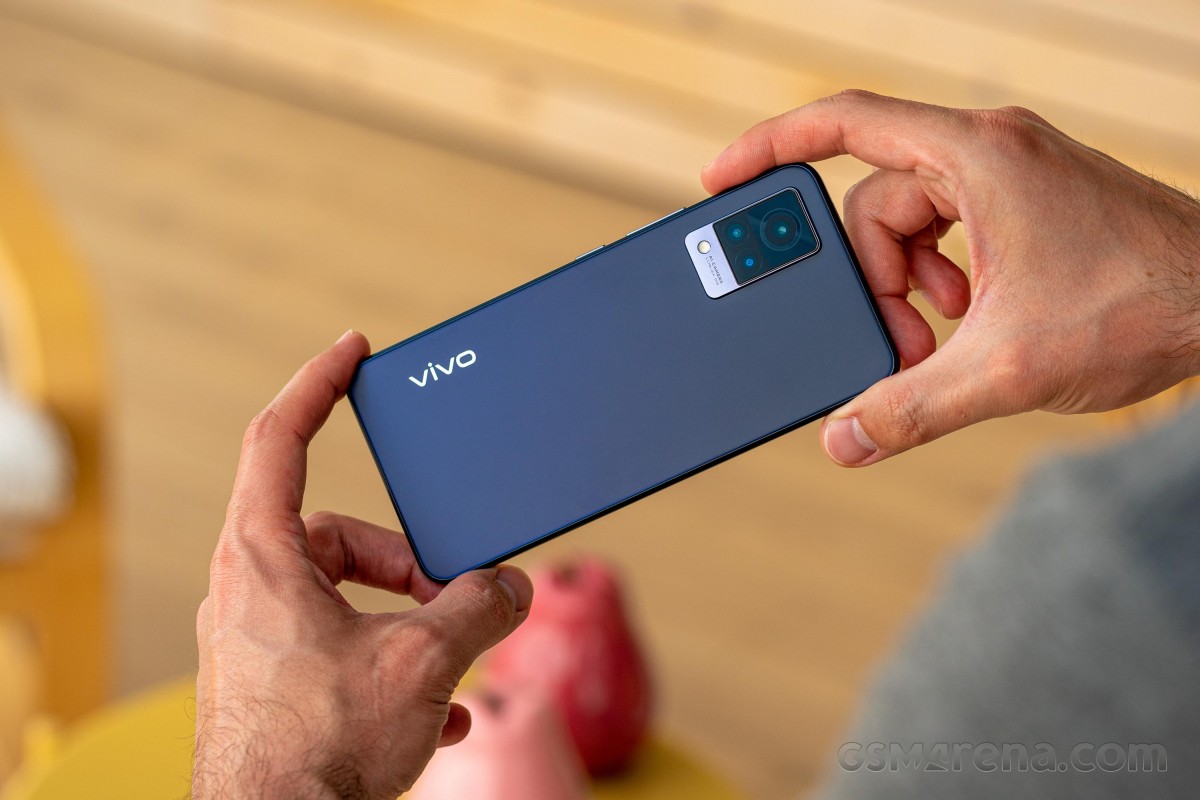 There is just something about the two-piece rectangular camera island and its various accents, chamfers and general arrangement that is somehow reminiscent of "business" and "serious" designs of old. This is particularly true for the Dusk Blue color of our review unit. It is a very deep blue, almost bordering on steel color, which works together nicely with the glossy and slightly different shade of blue/steel on the middle frame. 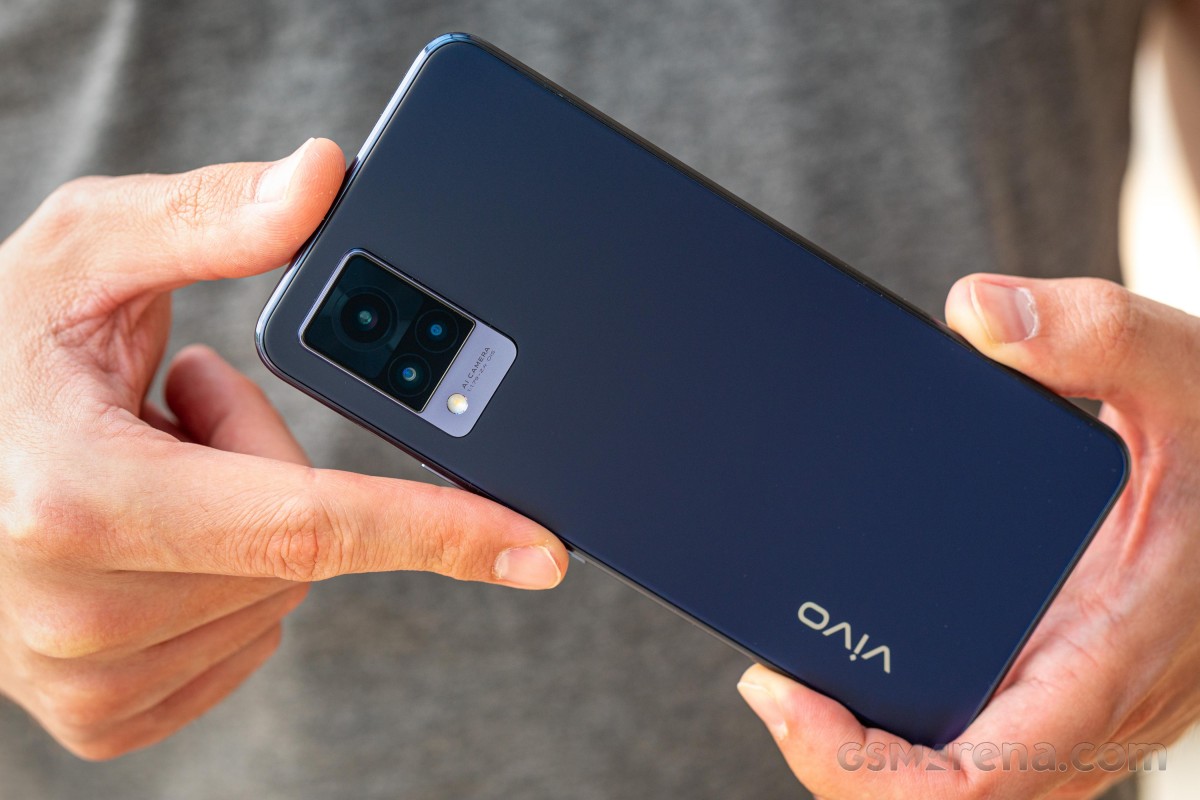 Speaking of the frame, it is, in fact, color-matched with the back and the camera island. A nice little touch that ties the whole design together. If "serious" is not your thing, then you can go for the much more colorful Sunset Dazzle color or the Arctic White. That last one seems to only be available on the 5G version of the vivo V21.

The vivo V21 is a slick device in a more literal sense, too, measuring just 7.3mm in thickness. That is somewhat contrasted by the flat surface design of the middle frame. The frame has a sort of iPhone vibe to it, which is far from criticism.

As far as we can gather, both the back and the middle frame on the V21 are made of plastic. Quite differently feeling plastic, though. The back is almost silky to the touch on our Dusk Blue unit - it feels quite premium by touch, but it's not particularly easy to keep clean. The frame is shiny and smooth.

The glass on the front is probably not Gorilla Glass as otherwise, vivo would have boasted about it. There is also a factory pre-applied screen protector - it's thin and well-applied. 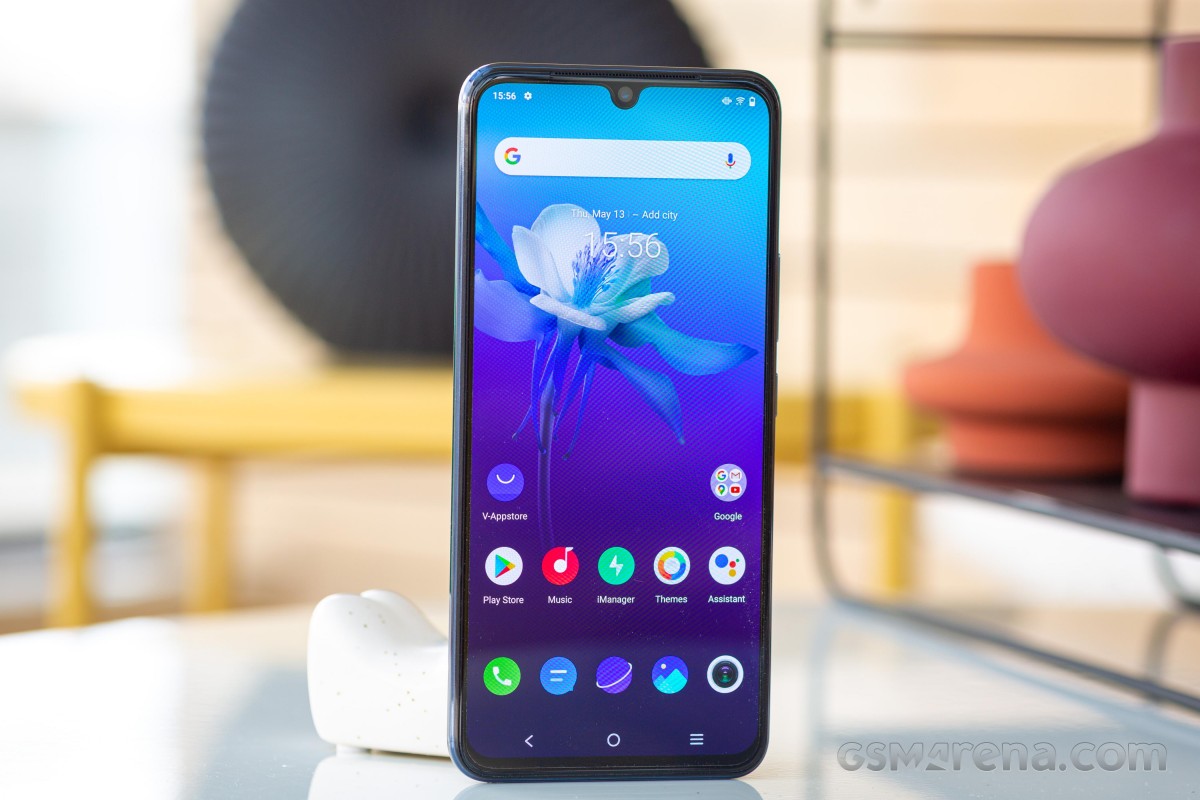 Speaking of the front side, the bezels around the 6.44-inch AMOLED display are reasonable in thickness, but their size is still a dead giveaway for the mid-range pedigree of the V21. 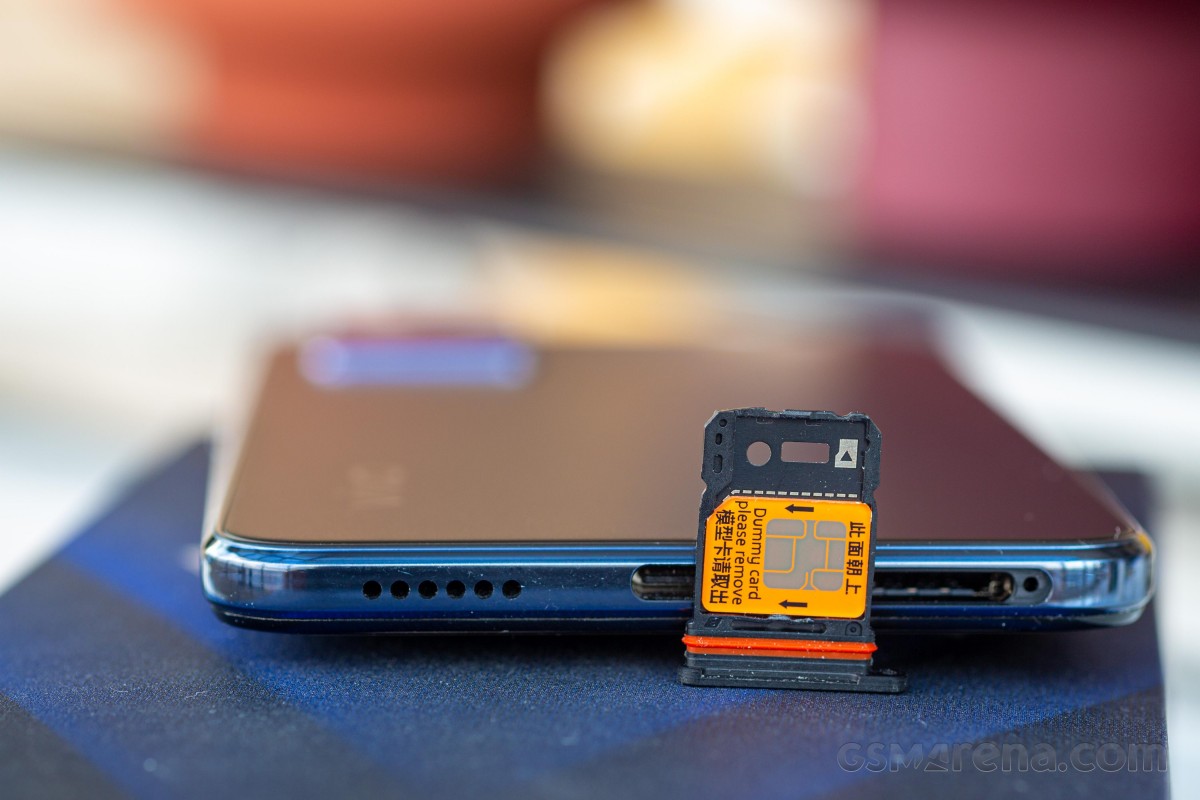 While there is no official ingress protection rating on the vivo V21, it is worth noting that the SIM tray has a clearly visible, bright-red gasket on it. We suspect there is at least some dust and splash protection in place.

The vivo V21 has a standard control scheme. The volume rocker and power button on the right side are easy to reach and provide nice tactile feedback. The textured finish on the power button is a nice touch. 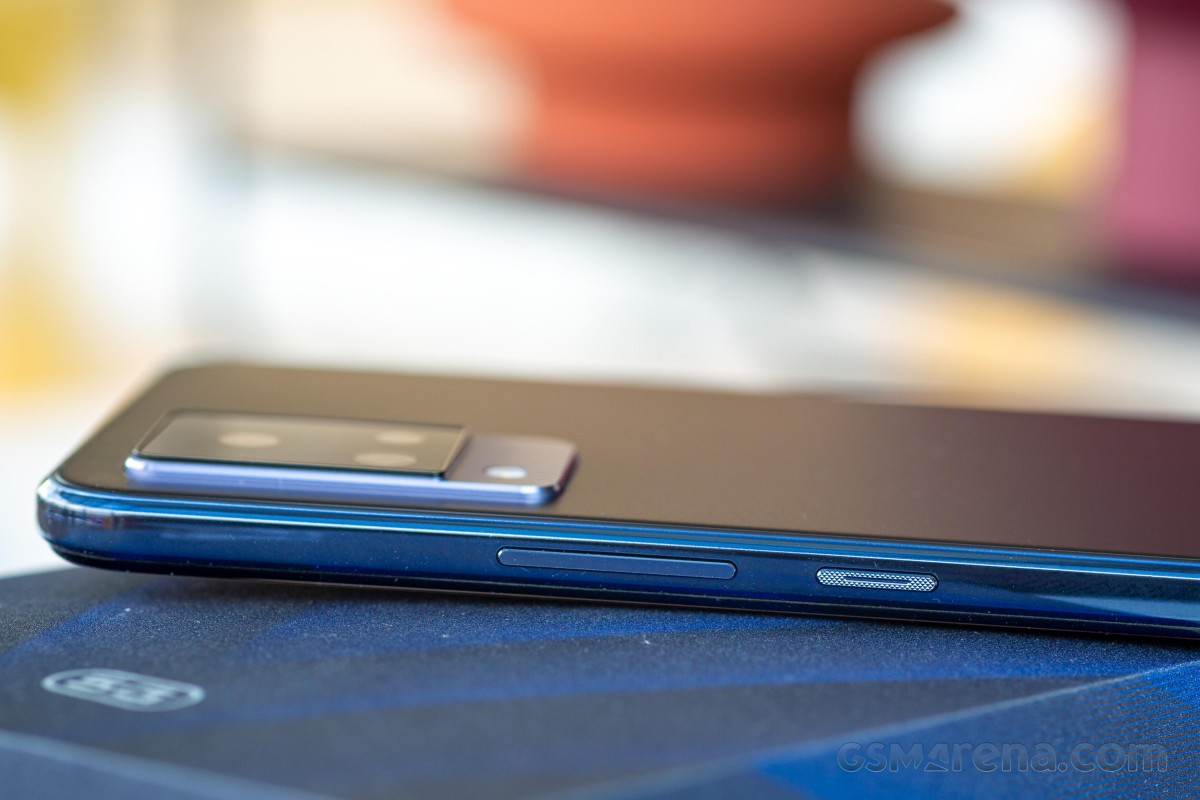 There is nothing on the opposite frame. 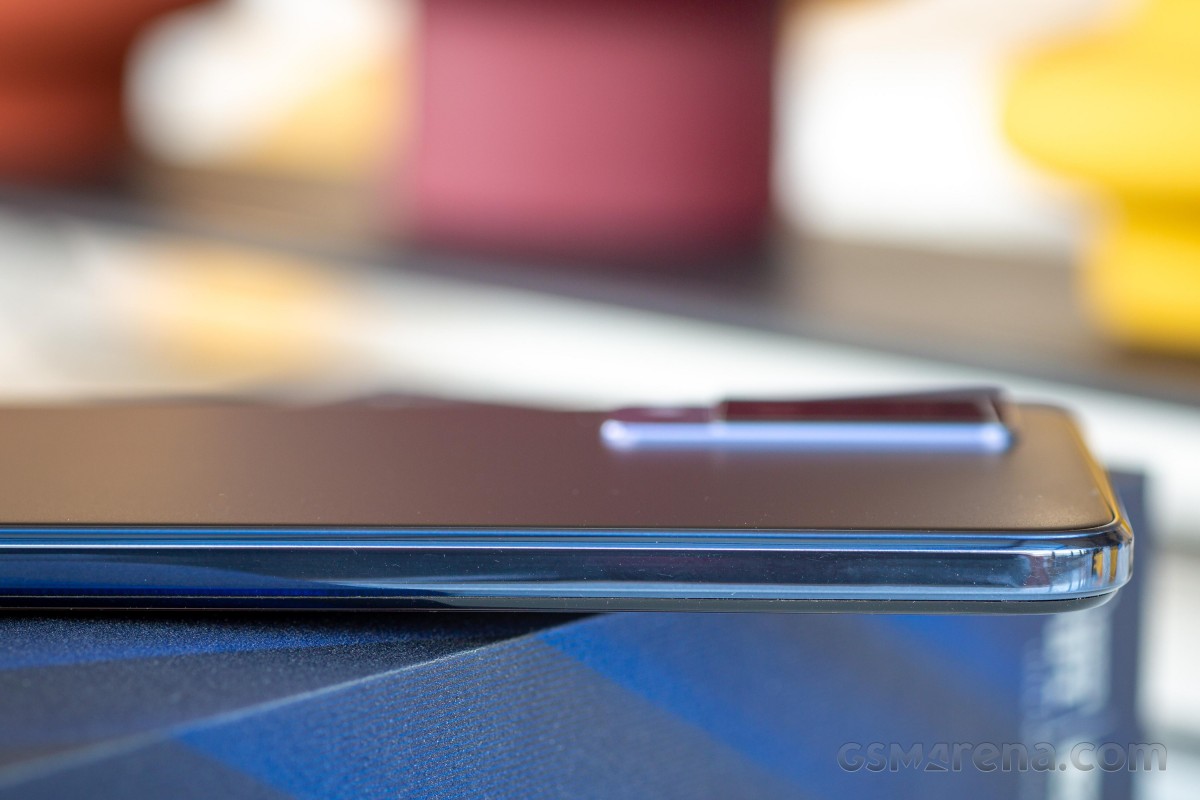 The top of the phone is nearly empty as well, just housing the secondary noise-canceling mic. 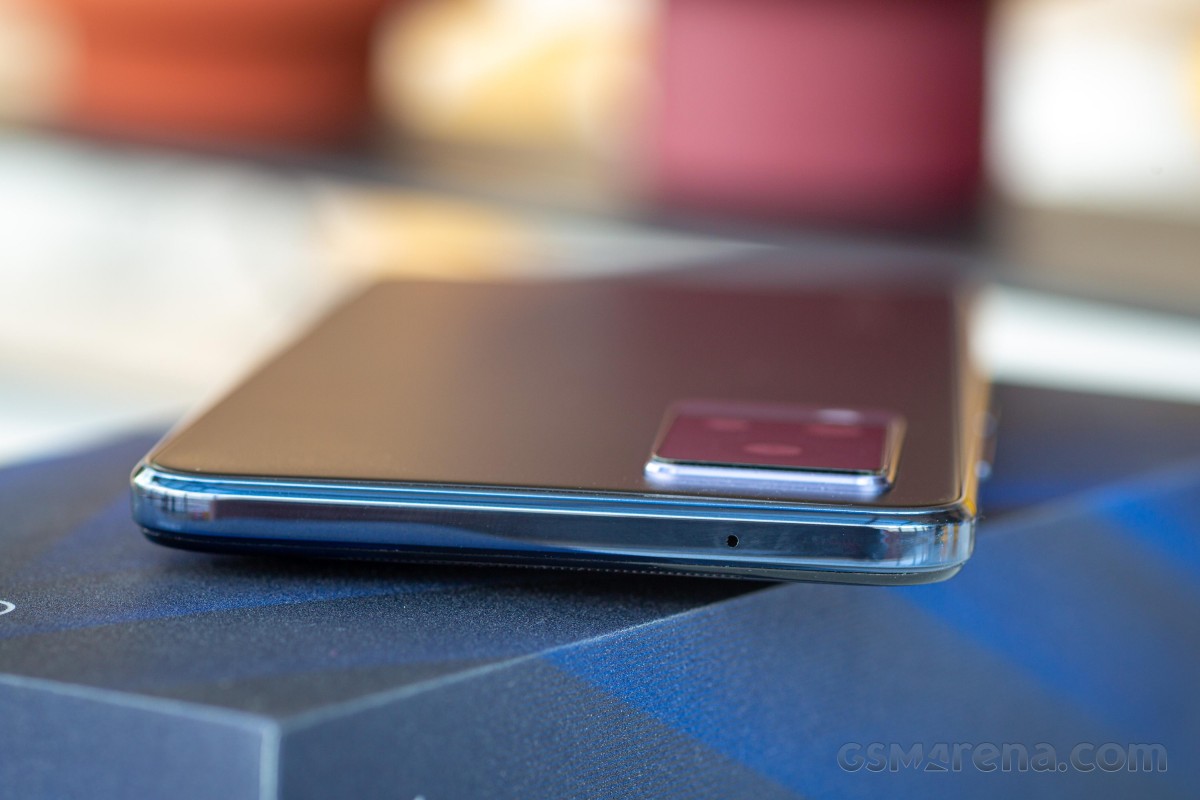 In contrast, the bottom side is busy. This is where the main microphone sits, along with the single bottom-firing speaker. There is no stereo setup on the V21, not even a hybrid one.

The USB Type-C port on the V21 has a USB 2.0 connection behind it and supports OTG.

The SIM tray is a hybrid affair. A less common variant, with the two nano-SIM slots on either side of the tray. One of these is a hybrid tray, which can either take a SIM card or a microSD card. 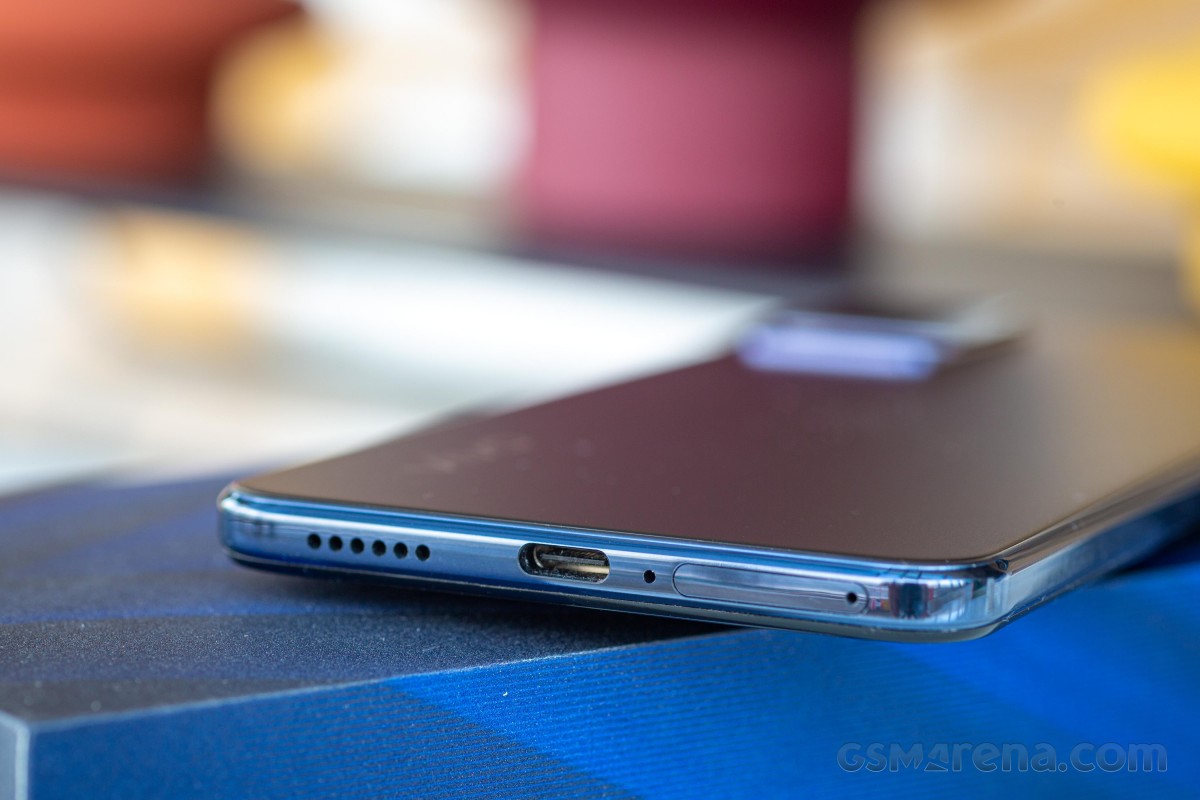 There isn't much on the front side of the V21 at first glance, other than the display and the big selfie cam, nested in a teardrop notch. Above it sits the earpiece, which is angled slightly upwards, presumably to allow as much space for the selfie snapper as possible.

If you look hard enough, however, you will notice that there are actually two LEDs flanking the selfie camera. This is meant for low-light photography and is kind of a unique feature. 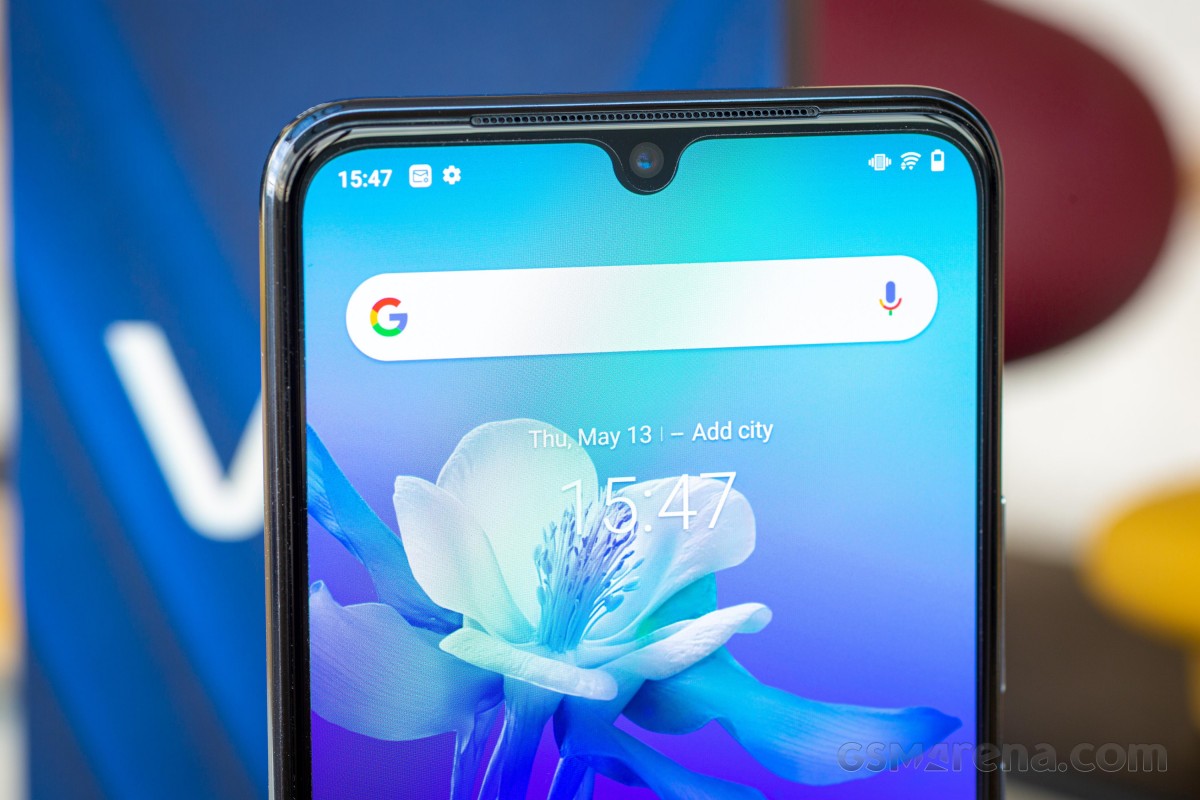 The vivo V21 has an under-display fingerprint reader. It is of the more common optical variety, and we found it to be excellent in both speed and accuracy. 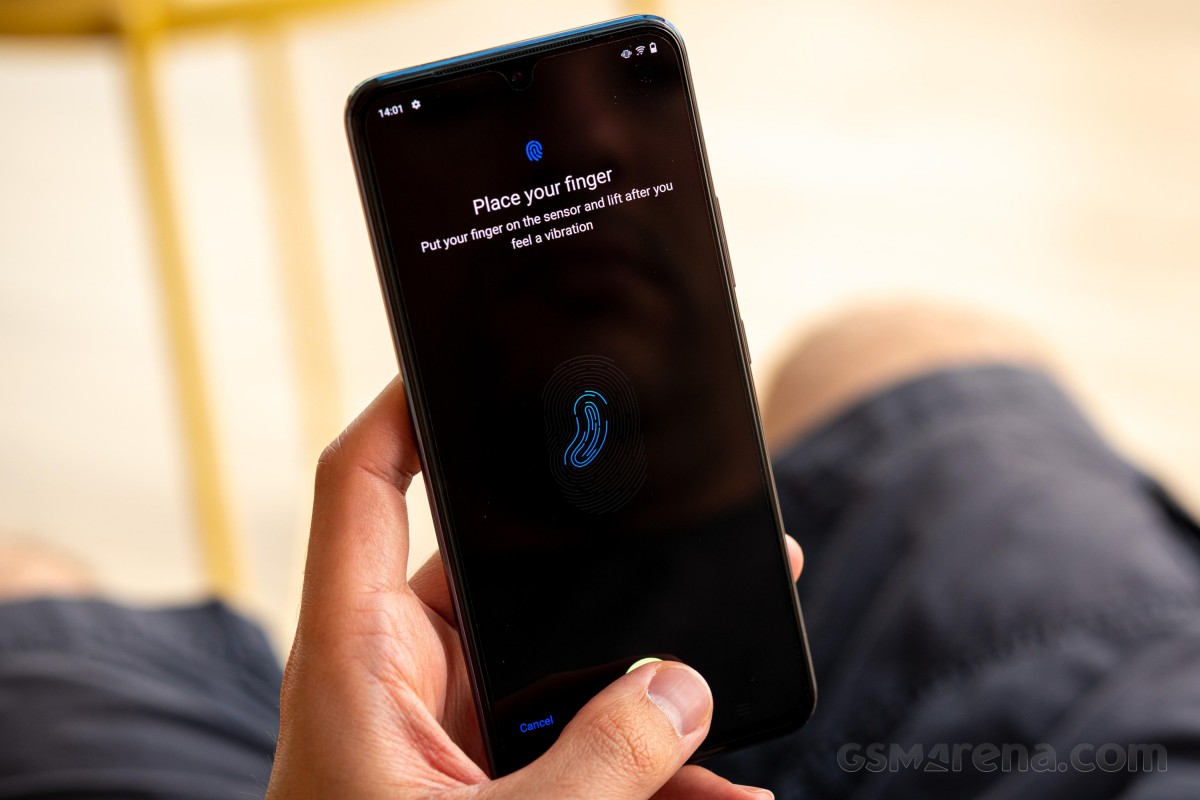 In case you were wondering, the V21 does not have a notification LED. This is pretty much the norm nowadays, rather than the exception, though.

Worse phone ever. Very low battery performance at a very high price. My regrets on buying this phone. Such a waste of money.

If you're looking for a high class phone, why don't you go for iPhone then....so pathetic