Back in May vivo and FIFA signed a partnership agreement that makes the Chinese phone manufacturer an official sponsor of the next two World Cup tournaments. Less than a year before the 2018 event in Russia posters of the new vivo flagship leaked on Weibo. 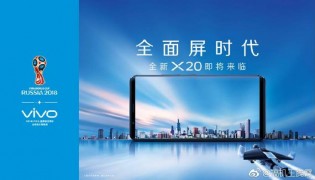 The images do not reveal much, but we clearly see an 18:9 display, similar to the Full Vision screen LG implemented in its flagship G6. There are minuscule bezels on the sides and the top and bottom are kept small too.

Over the phone renders a slogan says “The era of full-screen” along with “Vivo X20 coming soon”. Surely we can argue if this is a true full-screen, but the render looks similar to the live images we reported last month.

Ultrasonic fingerprint scanning technology from Qualcomm is going to appear first in vivo devices around the first quarter of 2018, so this might be a release date to look forward.

Vivo is first in line for Qualcomm's in-screen fingerprint readers

I see its more looks like LG G6 than Samsung