vivo X21 with under-display fingerprint sensor stops by Geekbench too

vivo is going to unveil the X21 at an event in China on March 19, and now that we're only a few days away from that a prototype has been spotted in the Geekbench database.

As usual, this reveals some of the phone's specs. Note that the device that was benchmarked is the UD version, as you can see from the screenshot, which means it will have an under-display fingerprint sensor. The vivo X20 Plus UD was the first smartphone in the world to employ this tech, and the X21 is probably going to be the successor to the smaller X20 that was released last October. 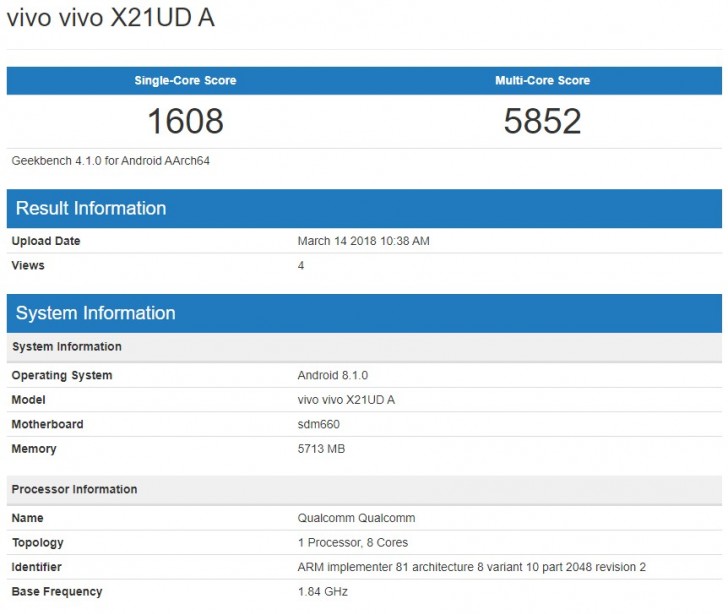 The vivo X21 UD comes with the Snapdragon 660 at the helm, just like the X20 before it. The chipset is paired with 6GB of RAM, which is 2GB more than its predecessor had. The big news is that the new model will launch running Android 8.1 Oreo, which is notable because both the X20 and the X20 Plus UD run Android 7.1.1 Nougat.

which Vivo has two rear cameras and marked v8+ is it the Vivo 4.66? Cheers

By design from Qualcomm because the gap between midtier and flagsip was too big. This change will help reducing that gap, even if it's actually still quite big in GPU (Adreno 512 is nowhere half of Adreno 530, let alone 540). At least it's a lot clos...