The vivo X50 Pro may hide something that is a first for a smartphone, but the handset itself looks and feels just like any other glass flagship. And that is some incredibly good news. 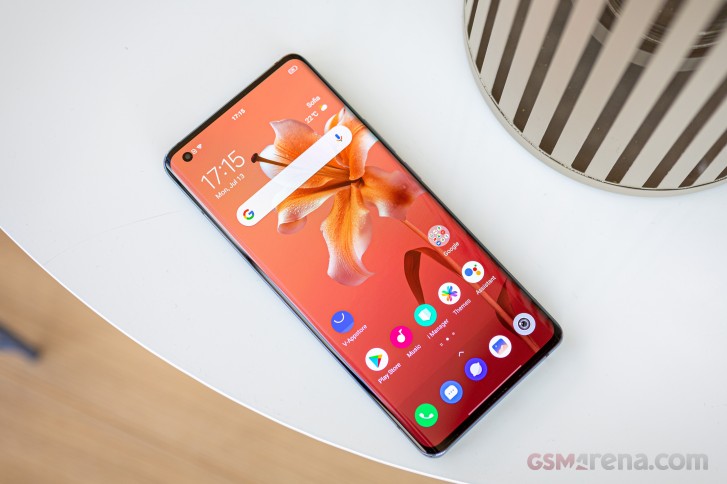 The glass sandwich design has been the unspoken consensus among the makers over the past few years and until the foldables change the landscape (or not), it will stay for a while. And the vivo X50 Pro is one very thin and lightweight device with a bright and curvy OLED, super thin bezels, and frosted rear glass with gradient paintjob. The thin aluminum frame seems like the thing that holds everything together and the one and only grip booster. 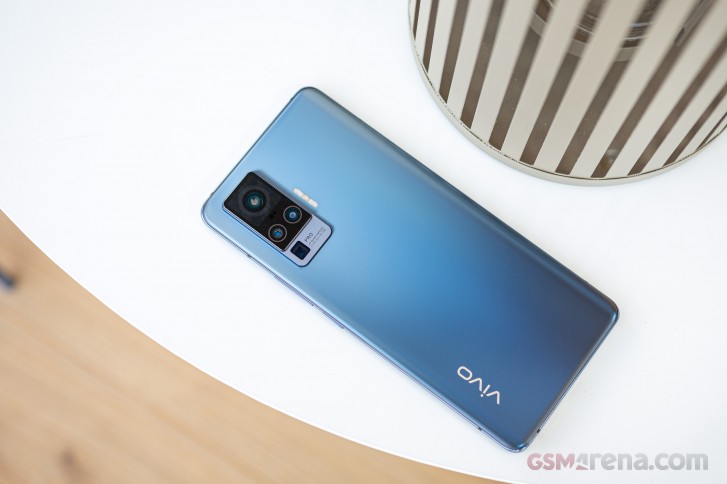 The vivo X50 Pro measures 158.5 x 72.8 x 8 mm and weighs 181 grams - numbers considered rather compact and lightweight for a phone with a 6.56" OLED screen and a 4,315 mAh battery. And let's not forget the large gimbal system inside, which did not make for a thicker than usual camera holder. For comparison, the OnePlus 8 with the same screen and battery size, but with fewer cameras, is 2mm taller than the X50 Pro. 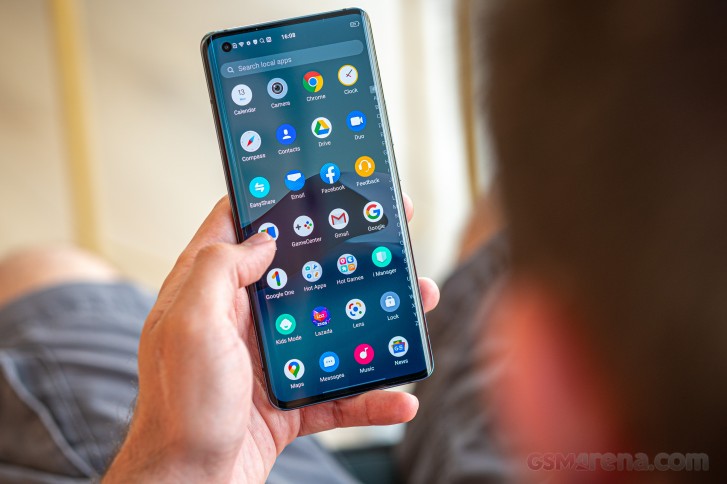 The whole front of the X50 Pro is occupied by the 6.56" AMOLED screen. It is a shared key feature through the entire X50 series and is jam-packed with flagship-grade goodies - it has HDR10+ support, DCI-P3 color gamut, high refresh rate, and fast touch sensing. The X50 and X50 Pro here support 90Hz refresh rate, while the Pro+ goes up to 120Hz. 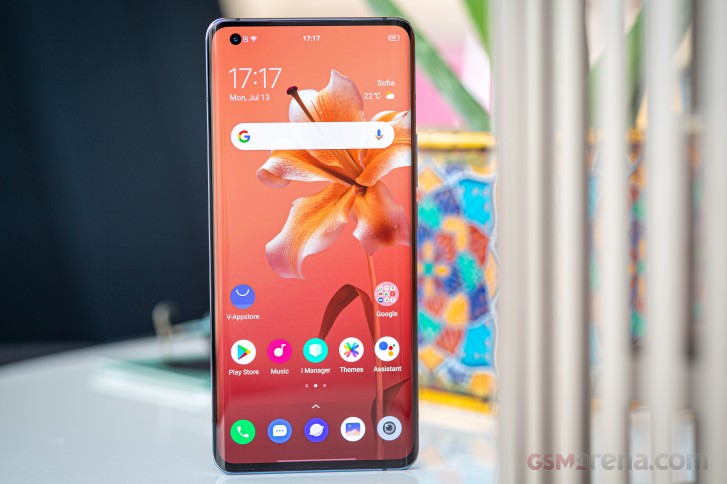 The OLED screen has impressively thin bezels. The 32MP selfie camera is inside one very small punch-hole cutout around the top left corner, one of the smallest black spots we've seen lately. 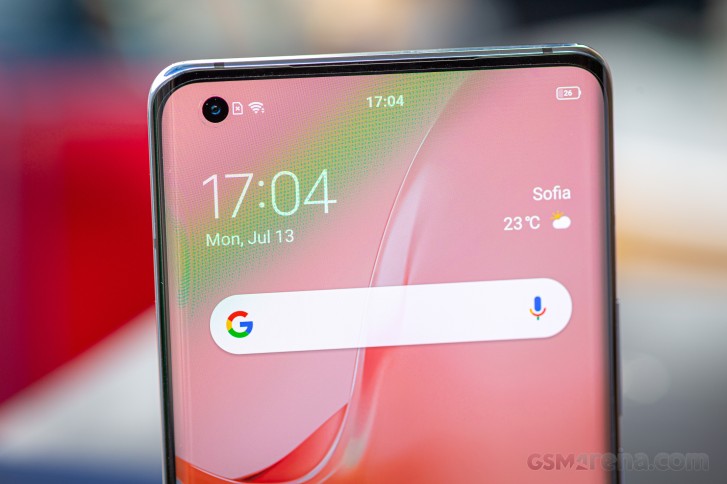 The earpiece is truly invisible above the screen just before the frame. You cannot even see its grille, just one long and super thin hole, where the earpiece should be. It is so thin that we may have a hard time fitting even something as sharp and thin as a razor blade.

The fingerprint scanner is behind the screen, just like on most of the top-tier phones. It is of the optical kind and works fast, though its accuracy depends on how much of your finger is on top of it. This means the surface of the reader is not as large as on some competitors, but once you get the gist of it, you will have no problems. You can enable face recognition for an even speedier unlock, but it is not as secure. 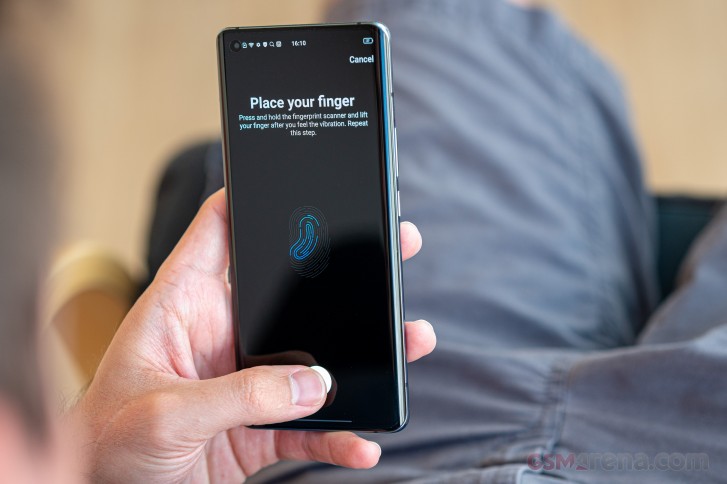 Vivo X50 Pro ships with a thin protective film, but we didn't like it very much and got rid of it fast. The front glass is a tempered one, though the maker hasn't shed any details on its manufacturer. It is curved around the longer edges, but not enough to make for touch issues because of false palm inputs. 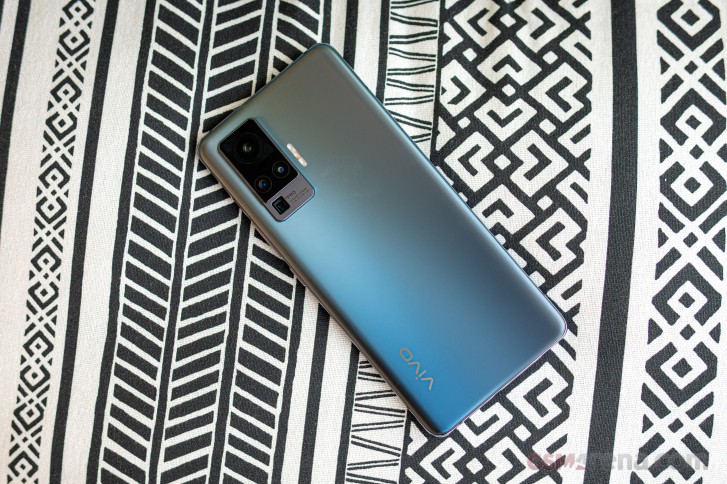 The Alpha Grey X50 Pro we have here has its rear tempered glass painted in grey and blue, transitioning smoothly in the middle and making for some cool light-bending depending on the angle.

The rear glass is also curved, just like the front one, and if you look closely - its curvature is actually steeper and goes in all directions. The frosted finish looks lovely and is mostly fingerprint resistant, though it is not grippy if that's what you were hoping for.

The only surface that provides any grip is the thin aluminum frame, which is thin on the sides, but thick and flat around the top and bottom. And thanks to this flatness, the vivo X50 Pro is able to stand upright - something we rarely see these days. Useful - hardly, but cool it is. 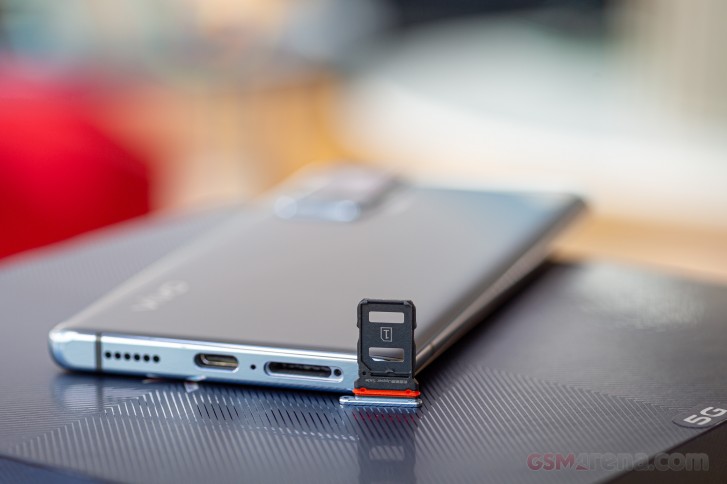 Speaking of the frame, its bottom is pretty crowded with the USB-C port, the mouthpiece, the dual-SIM tray, and the speaker grille. Meanwhile, all keys are on the left. 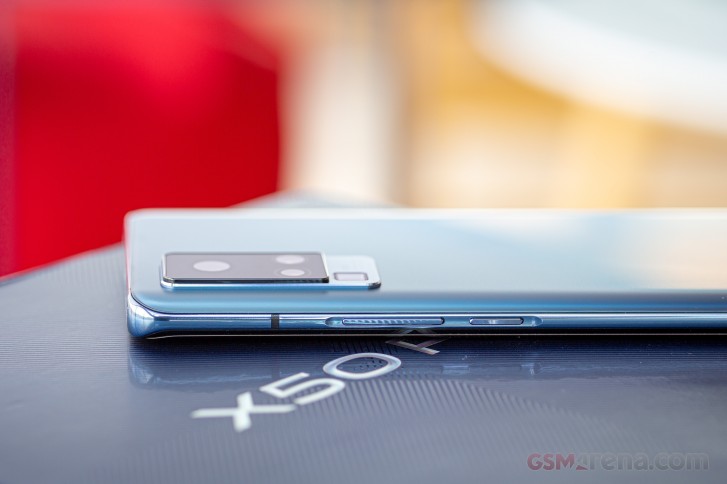 And now back to the hypnotizing back, which looks different every time we look at it. 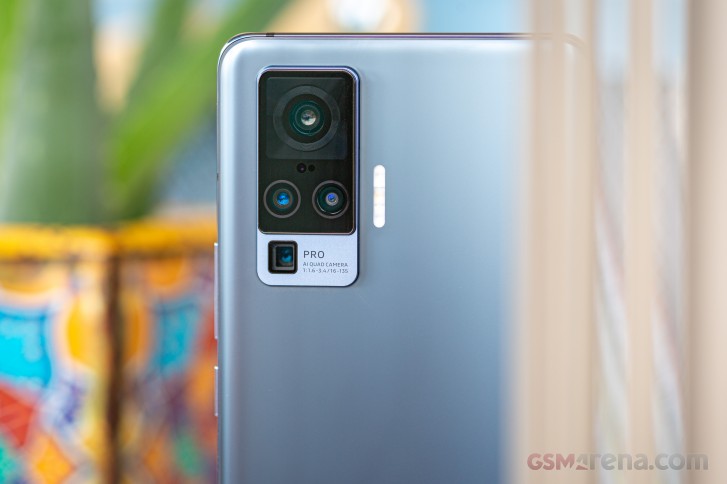 The rear camera is probably the X50 Pro most interesting aspect, and yet, the maker has managed to keep the camera bump simple and very reasonable in size. In fact, the setup is protruding just like any other flagship camera, be it a Samsung's or Apple's, no more, no less. 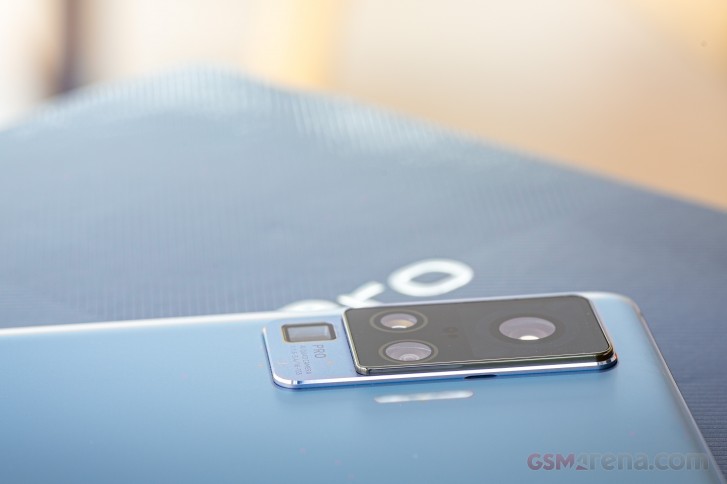 Most of the place is taken by the 48MP primary, and you can clearly see how much space its gimbal system is eating up. The 13MP portrait and 8MP ultrawide shooter can be seen below the main snapper, while the two tiny black dots around should be the assistive laser for the autofocus. 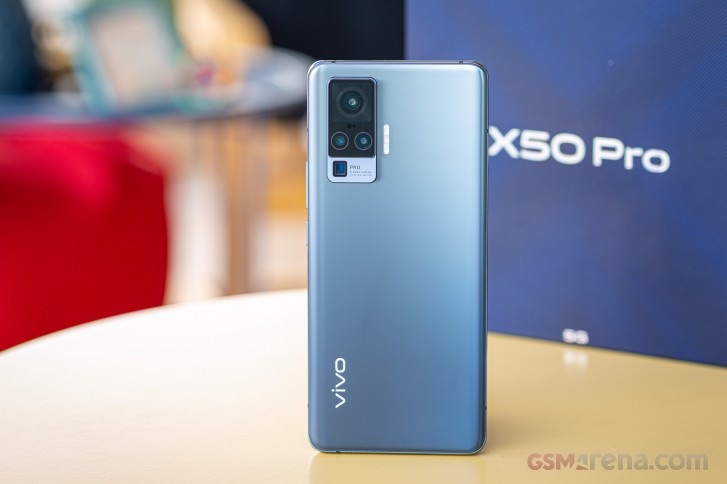 Separated is the final camera, but visible is only the end of its periscopic lens. It's an 8MP shooter that offers 5x optical zoom, but because of yet another relatively new technology, its lens requires more space than usual, and you can see only the end of it. The sensor is hidden behind the aluminum piece, somewhere beneath the word camera.

Handling the vivo X50 Pro is a flagship experience, and even without a case, the phone feels secure enough in hand, be it when shooting videos or browsing Facebook. Its glass body is slippery, sure, but the frame and its shape add just enough grip to make it usable even without extra protection. And if you feel you need more peace of mind, vivo has you covered right out of the box with the official case shipping with the phone. 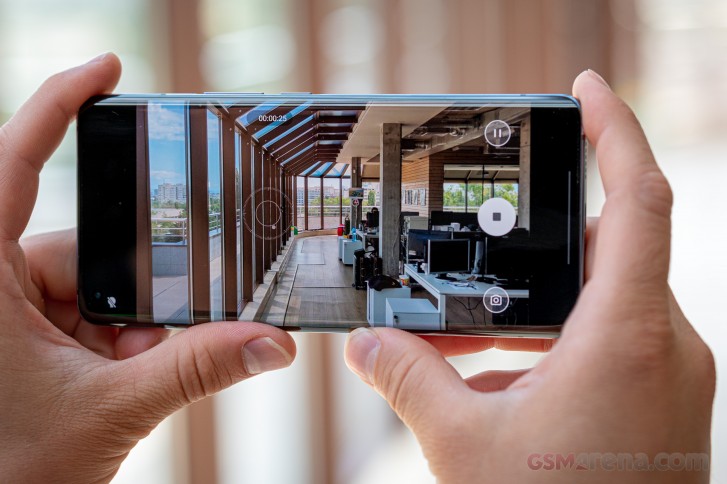 The X50 Pro is a well-built phone, that's for sure. The dual tempered glass panels are the most common trend on the market, while the aluminum frame makes for both grip and sturdiness, even if those are minor. The phone is not waterproofed, even if rubber seals are present on the SIM slot. It may or may not have some ingress protection, but it is better to be considered as not protected against water and be careful with it. We really hope for the Chinese makers to make a sharp U-turn on the water protection soon - it's a long overdue.

This is a good recommended phone for all gamers. Smooth and good.