Vivo's Funtouch OS 9.1 will be unveiled on September 17

Vivo apparently has a jam-packed schedule already laid out for next week. First and foremost, there is the NEX 3 5G flagship, with a September 16 Shanghai unveiling. Later that week (September 20, to be exact) the V17 Pro will be making its first official appearance as well. As per a teaser released by the Chinese company, a new version of its own Funtouch OS skin will also be unveiled around the same general time frame, sandwiched in between the the phones.

The video mentions September 16, which means there is a high possibility that both aforementioned vivo phones will ship with the new Funtouch OS 9.1 out of the box. The clip itself offers some mostly toned-down monochrome graphics with a splash of color here and there - likely telling for the overall look and feel of the Android ROM.

The text on the image roughly translates to "not extreme" and what seems to be a clarification follows: "not over-decorated and never simple" or alternatively something along the lines of - "However, the degree of decoration is never simple and rough". Based on that, we can only assume vivo is going for a sophisticated look.

Going off Funtouch OS numbering history, as well as a few scattered mentions of Funtouch OS 10 in association with Android 10, we expect this 9.1 version to be a rather minor update over the existing Funtouch OS 9. The latter actually brought about quite a few major changes when it was first unveiled in March this year. 72 new features, 55 optimizations of different details, 263 UI improvements, as well as a simpler and more beautiful interface, and a smarter and friendlier user experience. All selling points for Funtouch OS 9.0 and a compelling enough argument for the huge jump in numbers from the previous Funtouch OS 4.5 version. 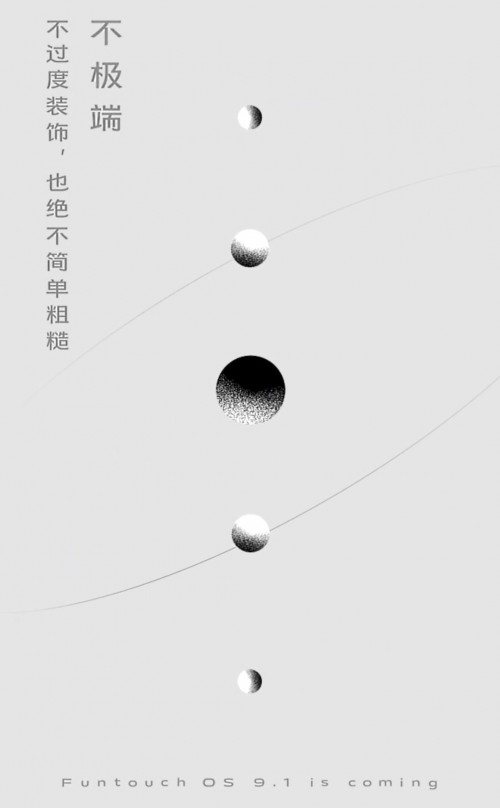 But, we have to be honest here, unless Funtouch OS 9.1 is truly revolutionary is some way, all the attention at camp vivo is definitely and understandably being soaked-up by the NEX 3 and its alleged amazing all-screen design and top-notch internals. So, stay tuned for that next week.

Yesterday I sold my Vivo Z1 Pro due to system bloatwares that couldn't be uninstalled easily and also due to personal data insecurity. I have Google Play to load apps, why do they provide a separate app Store and call it an in house solution. Why is ...

Vivo has gradually evolved to be a decent phone manufacturer. A good ROM which appeal to the people will literally propel them further ahead in the race.