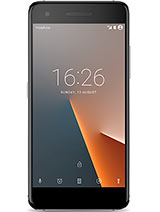 Have it for a year now and by far the best phone i've had from Vodafone. Works flawless and his battery last for 10 hours of regular usage. Great display high quality camera device also.Very happy with this.

is it qi enabled? for wireless chargers?

Ash, 24 Sep 2018I brought this phone off trade me and did a factory reset a... morethat will be done at local mobile shop at cost of 500(note: price may differ on shops)

I brought this phone off trade me and did a factory reset and i now need the gmail account that was previously connected to this phone to open it but i cannot get a hold of the person i bought from. Is there a way to reset the phone without needing the previous gmail account??

Aye, got this phone, and. it was good.

It has a carrier logo branding! (Just kidding)

This phone sucks.
I bought it because my old phone's battery was becoming unreliable. But, out the box, this phone gave 10hrs max.
After turning screen brightness all the way down, uninstalling everything I could, disabling all forms of auto-update, and using battery extender, I might get 24hrs, if I don't use it for anything other than checking the time.
It's battery estimates are always wildly optimistic, but Standby mode uses up most of its battery life. Which is infuriating, because I go to sleep and it's on 95%, and wake up to its low-battery warning.
This is basically a corded phone with a screen.

This phone started off ok, but it's rubbish now, no signal reception, if iam in a building then just forget it, battery life non existent, hangs all the time, can barely make a call on it, it's disgraceful for a phone that is not very old, to do anything about it I have to send it away for 7 days and be without a phone, not happy at all with this

pb, 27 Sep 2017not very compatible with Snapchat app. Anyone experience an... moreHi there did you manage to solve the issues with snap chat?
I just bought that phone I've tried to change the navigation settings but the keys don't work either. So snap chat won't work at all, may take the phone Back

John, 03 Feb 2018Great all rounder. Well built, very sturdy. Has finger read... moreDon't worry about finger print You can make another one.

Battery is non-removable according to the manual.

pb, 27 Sep 2017not very compatible with Snapchat app. Anyone experience an... moreYou can't send snap chats on this phone

I have this device for 3 months and it has proven to be a very decent smart phone. It is comparable to the Nokia 6 in performance with a newer chipset the 435. It is a smooth operating phone if not the fastest but it gets the job done no matter what it is used for. The screen is bright and the colours really pop. The 16MP rear and 8MP front cameras are very good and with plenty of manual controls and other photo options. It is all round a far superior device to last year's Ultra 7. If it were sold under any other brand name apart from Vodafone it would be a far more popular device. It is as good as any other lower end mid range phone on the market right now.

Smart Ultra 6 was a revelation, produced by the Chinese company ZTE.
The Smart Ultra 7 was produced by Alcatel for economy reasons i suppose. Poor product.
Smart Ultra 8 (V8) produced once again by ZTE. It seems Vodafone learned its lesson.

Ultra 8 - Pros: it's a Best Buy, responsive, 32 Gb ROM, 3Gb RAM, Fingerprint reader that works perfectly, superb design, contrast and color photos better than Ultra 6, photos of the subject in motion without streaks behind it, strong volume and bass much beter than Ultra 6. Cons: The pictures are a bit grainy, like the Sony Z1 that I owned before Ultra 6; In low light grains becomes upsetting; The On / Off button is uninspired placed on the left side. The Ultra 6's was on the right side right under the volume. If you turn it on the landscape mode, chances are very high that you will touch this button with your left hand's big thumb and close the device while playing a game or taking a picture. After 3 weeks, I'm still not used with it. Personally, I would have liked to have touch buttons outside the screen, underneath it as well as Ultra 6. So, it takes 2 steps: One to activate the virtual buttons bar and the second to push them. Besides that, the active screen gets smaller because of the 3 buttons bottom bar.

It would be great if the next generation of Ultra, V9 or so, would have dual cam and IP68/69.