About a decade after Nokia launched the Lumia 930, Microsoft finally managed to follow up with a flagship smartphone. OK, it may have been just a year and a half, but it sure felt like ages.

Following the Nokia acquisition Microsoft put out an innumerable amount of entry-level 4- and 5-series Lumias, with only the 640 and the 640 XL grazing the midrange. Still, the 930 remained heirless month after month, the successor awaiting better times. Those have finally come with the arrival of Windows 10, and not one but two models were just announced in the high-end 9-series. 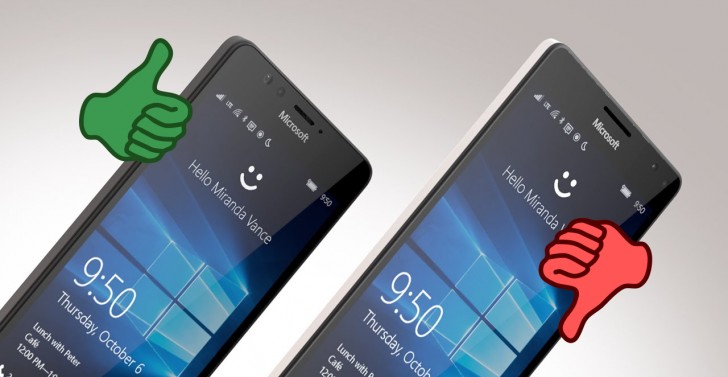 The Lumia 950 XL is Microsoft's answer to the growing number of Notes and Pluses, packing the absolute best hardware available. A 5.7-inch QHD AMOLED display, Snapdragon 810 chipset, and 3GB of RAM are par for the course of today's flagships.

Microsoft builds on top of that with a new 20MP PureView camera with Zeiss-branded glass, OIS and triple LED flash, though we're not really seeing actual RGB colored diodes. And what better way to cater to power users than offer them swappable batteries and a microSD expansion slot?

These are more of a necessity really, if you're going to take full advantage of what's perhaps the best feature the Lumia 950 XL has to offer (and the plain 950, too). Continuum turns your phone into a portable Windows 10 PC for everyday tasks thanks to the small box of connectivity that the Microsoft Display Dock is. That, and a monitor/TV you need to have already. And a keyboard. And, possibly a mouse, though you could use the phone itself as a touchpad. How cool is that!

Anyway, the Lumia 950 XL might be the only computer you'll need. What do you think of it?

Then comes the slightly lesser Lumia 950. Slicing half an inch off the display diagonal, the regular-sized flagship comes with the Snapdragon 808 and... that's about all the difference. Camera, Continuum, USB Type-C, you get the whole experience in a smaller package. So does the Lumia 950 tickle your fancy?

But wait there's more. The Lumia 550 got no more than 10s of Microsoft keynote time, but it deserves more attention as it brings a pixel-rich 720p 4.7-inch display to the masses. Although admittedly the rest of the specsheet isn't overly exciting, the $139 asking price is. What do you reckon?

Lumia 950XL Dual Sim. Bad experience. The apps i usually had from the other platform that i switched from are normally outdated if not inexistent (Social Media, Messenger Apps, Navigational Apps, Banking Apps, etc). And just recently all of a sudden,...

I bought the Microsoft Lumia 950xl and the Bluetooth does not work and the software is too buggy. I hate this phone ans I only had it for 6 weeks.

it's been 3 months since that message. no new software at all.