Weekly poll results: Microsoft Lumia 950 and 950 XL get all the love

Microsoft apparently knew full well what it was doing, postponing the launch of its latest flagships. The Lumia 950 and 950 XL were announced after months of anticipation and the wait was worth it. And that's not our opinion, it's yours.

Understandably, its the absolute top-end Lumia 950 XL that's gotten the most raving feedback. A staggering 88% of votes are in its favor, making for one of the most universally approved smartphones in our poll history.

But the smaller Lumia 950 is not without its supporters either. Actually, you could say that the 3% margin in upvotes is about as much as the two specsheets are different. We believe it's the common features that are appealing to the bulk of our readers - Windows 10, Continuum, 20MP camera, wireless charging, the lot, and the chipset and display size hold less importance.

The modest Lumia 550 doesn't share all the fan love its big brothers are bathing in, but gets the stamp of approval nonetheless. Three out of five voters gave it the thumbs up, indicating that Microsoft is still looking good in the entry-level market, which it flooded with 4- and 5-series Lumias earlier this year. 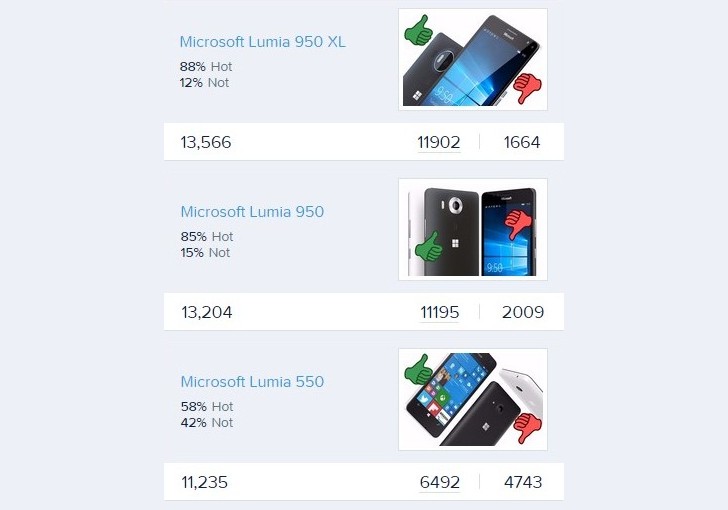 Weekly poll: what do you think of Motorola's five new Moto G phones?

I am myself as a Sony user since day one, very impressed by Microsoft's new phones. I do have a plan to buy the 950. I just hope they keep on improving and not becoming lazy.

wow!! I'm gonna love this. With contiuum make our life more flexibility . I've been wanted this as my gadget which allow me do my work in one hand .It is more ergonomics for me, all in one!! gonna have one of this soon^^