Competition between smartphone makers has them pushing the numbers up, up, up and one that increases with each generation is the screen diagonal. And the prestige of a big screen is coupled with big specs while small screen phones are perceived as "low-end" and the specs of phones reflect that.

There's the exception to that rule - super minis, compacts, whatever you call them they are few but famous. The Xperia Z Compact was perhaps the best known of them and this week it got a spiritual successor.

The Xperia X Compact showed that you can have both a 4.6" screen and an awesome camera. Also this week, the ZTE Axon 7 mini (well, a 5.2" mini) joined the cause. And, of course, the iPhone SE upholds the "small but strong" motto over at the iOS camp.

Our poll revealed a vocal group that will eat those up - 75% of people who voted were in support of petite powerhouses. 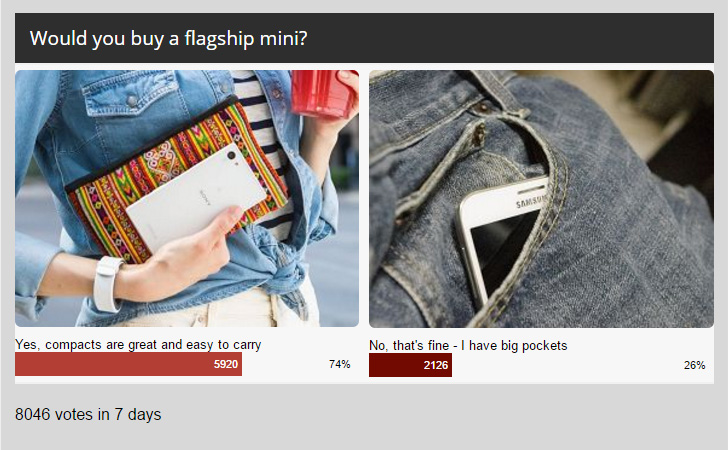 Unfortunately for them, bezels are the bane of a mini - geometry makes sure that equal bezels impact the screen-to-body ratio of small phones much more than on big phones.

And yet, the nubia Z11 mini isn't bezel-less and Samsung is yet to make, say, a Galaxy S7 mini edge (or even just a regular S7 mini). Well, some smartwatches are getting e-SIM cards voice call features, that's as mini as it gets. Though that's probably too much of a good thing.

Weekly poll: the Realme GT Neo2 upgraded to a better chipset, screen and battery, who wants one?

Weekly poll results: Android 12 loved for its looks more than its features

Weekly poll: what do you think of the changes and improvements brought by Android 12?

Weekly poll results: most people have a screen protector and a case on their phone

I think manufacturers should make a range of sizes of high speed smartphones from 4 to 6 inches to cater to all..

I have two 6inch phones, an a8 pro and a xa ultra, but I am not comfortable with them, to carry or running around, so I use a z5 compact as my main phone. So compact phones are more usable

i am tall, i have not-small clothes and not-small pockets and not-small hands. so i don't care what small people do with their lives or smartphones i pick big ones. same goes the other way and this kind of polls are completely useless. you wi...