Google’s new Pixel 2 phones are high in price but low on some essential features. Still, if owning a Pixel is your goal, our readers believe that the larger Pixel 2 XL is the better option by a large margin.

Sure, it shares in some of the downfalls of the smaller model (like no headphone jack), but the large P-OLED screen that is not surrounded by huge bezels gives the XL a leg up on its sibling. And to be fair, the iPhone 8 Plus and Galaxy Note8 are not much cheaper.

The smaller Pixel 2, it got weak support – just as many people voted that they are getting one of the outgoing Pixel models. They too have single cameras and wide bezels, after all, and will keep running the same pure Android for a while longer.

Finally, the most popular option by a small fraction proved to be a non-Google phone. HMD is cranking out new Nokia phones, OnePlus seems to be doing fine as well and even Lenovo committed to selling clean Android (under the Motorola brand). And don't forget the Xiaomi and its Xiaomi Mi A1 AndroidOne. 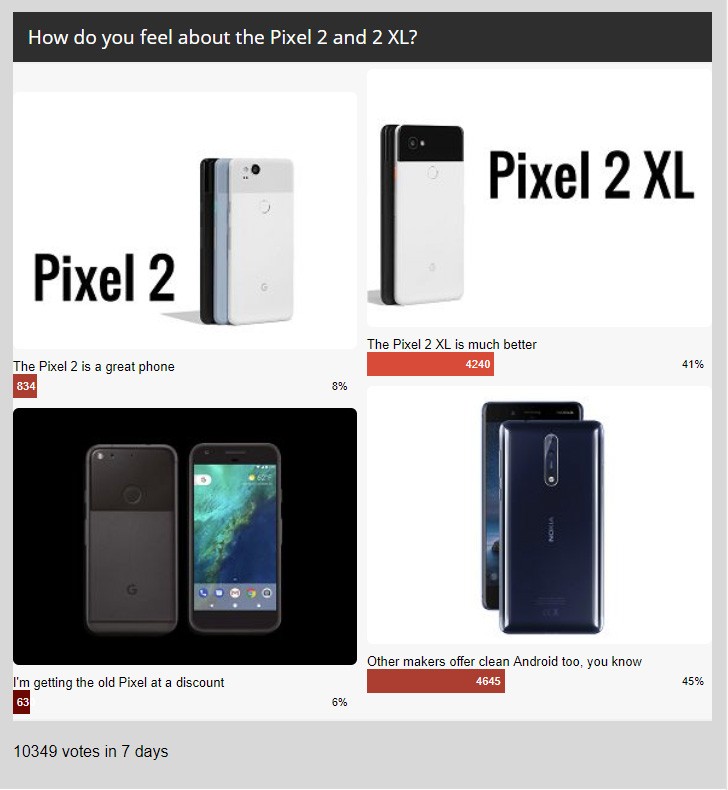 Weekly poll: what is the ideal screen size for a smartphone?

I mean, I would too. But there's a difference between Xperia phones past the Z5 series and the Pixel 2. The Pixel 2 is just FLAT OUT UGLY.

I won't mind staying with a two three years old design if it provides me with extra security for the display. If i am gonna spend close to a thousand bucks, i want my phone to be stronger one. I would accept those old school design.