WhatsApp finally lets everyone hide their Profile Photo, Last Seen, and About from specific people

WhatsApp started working on a new privacy setting last year that allowed users to hide their profile photos, last seen, and About info from specific people in their contacts lists. Its availability was limited since it was in beta, but the company has announced that it's finally rolling out to all its users across the globe on iPhone and Android devices.

Now you can select who from your contact list can see your Profile Photo, About, and Last Seen status. For more information follow this link: https://t.co/UGMCx2n70h

Until now, you had three privacy options for your profile photo, last seen, and About info - Everyone, My contacts, and Nobody. These are joined by a fourth option called "My contacts except..." which was already available for Status privacy. 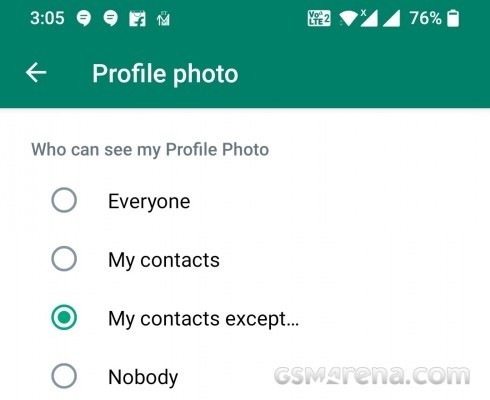 WhatsApp's new privacy setting is rolling out for all

As the name suggests, the new option allows you to show your WhatsApp profile photo, last seen, and About info to people in your contacts list except those you exclude. But it's worth noting that if you don't share your last seen with others, you won't be able to see theirs either, just like read receipts, with the only difference being that the latter always remains on for group chats even when you have turned it off.

In addition to widely rolling out a new privacy control, WhatsApp also announced a few group calling features, allowing users to mute others during a group call while also being able to message specific people. You will also see a banner when someone joins a group call offscreen.

Some new features for group calls on @WhatsApp: You can now mute or message specific people on a call (great if someone forgets to mute themselves!), and we've added a helpful indicator so you can more easily see when more people join large calls. pic.twitter.com/fxAUCAzrsy

Special thanks to wisetechacker @gmail com for exposing my cheating husband. Right with me i got a lot of evidences and proofs that shows that my husband is a fuck boy and as well a cheater ranging from his text messages, call logs, whats-app message...

You are right brother