The Xiaomi 12X is an excellent smartphone with a balanced design, good looks, and a small footprint. In fact, the Xiaomi 12X is one of the most compact Android flagships on the market, together with the Samsung Galaxy S22. 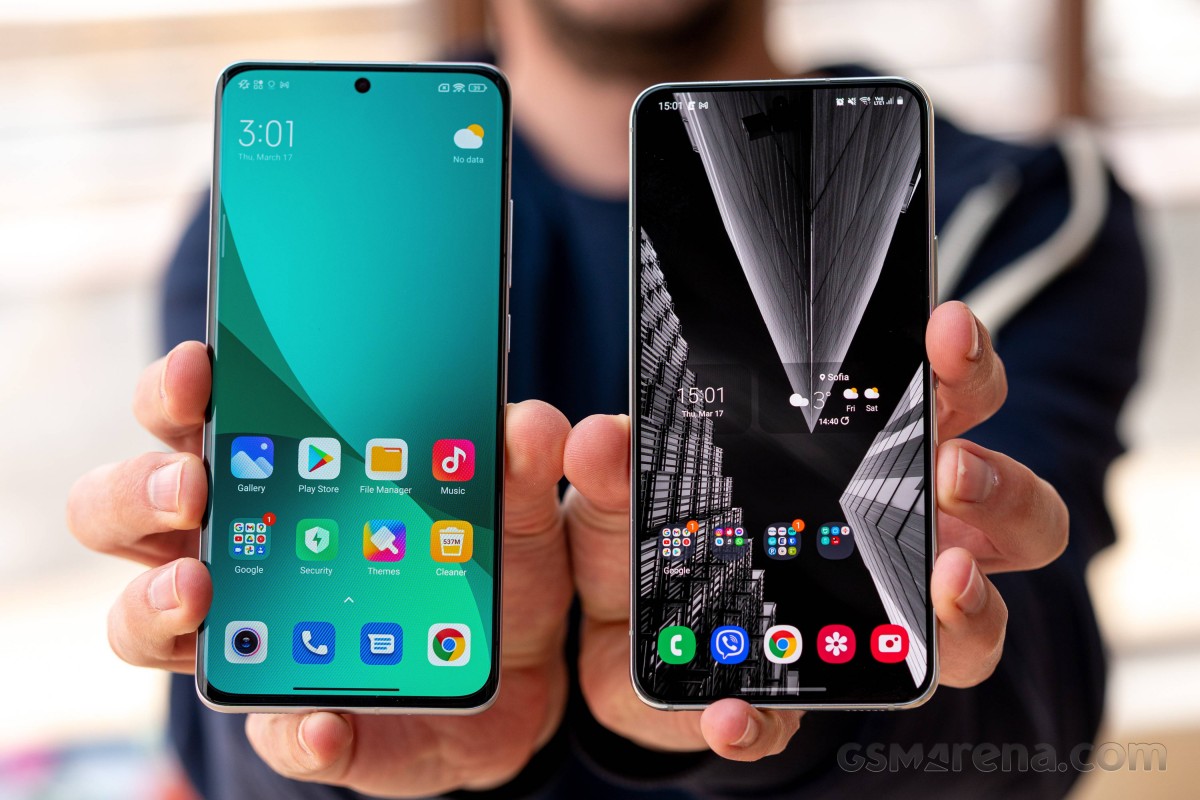 The Xiaomi 12 and 12X are identical, so we guess you have to trust us this is the 12X and not the 12. Not that it really matters for this chapter.

Anyway, like most premium smartphones nowadays, the Xiaomi 12X employs a dual-glass design and a metal chassis with a visible aluminum frame with a brushed surface. The front panel is as curved as the rear one making for one truly symmetrical shape that's easy to love. 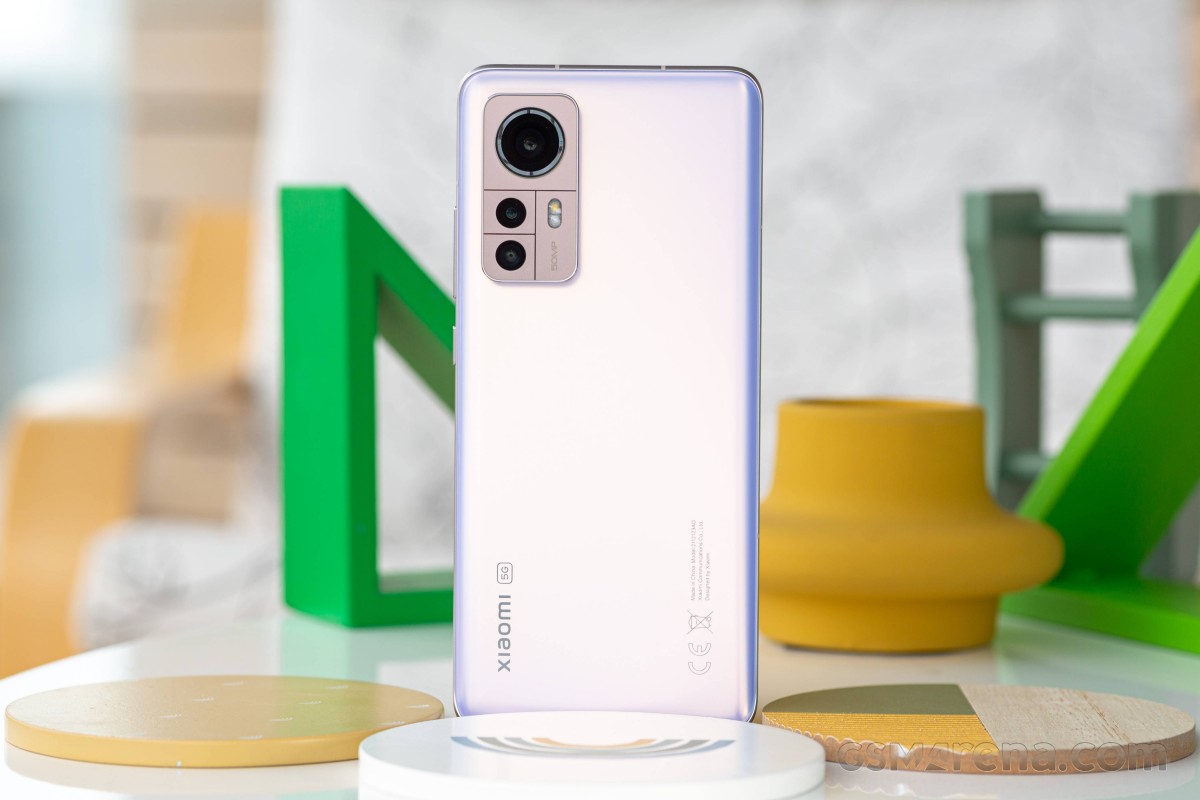 And while we are exploring the Xiaomi 12X overall design, we want to applaud the maker for its attention to the fine details and the overall symmetry that doesn't apply only to the shape, but the speaker grilles as well. The two outlets on the top and bottom are completely identical and symmetrical. 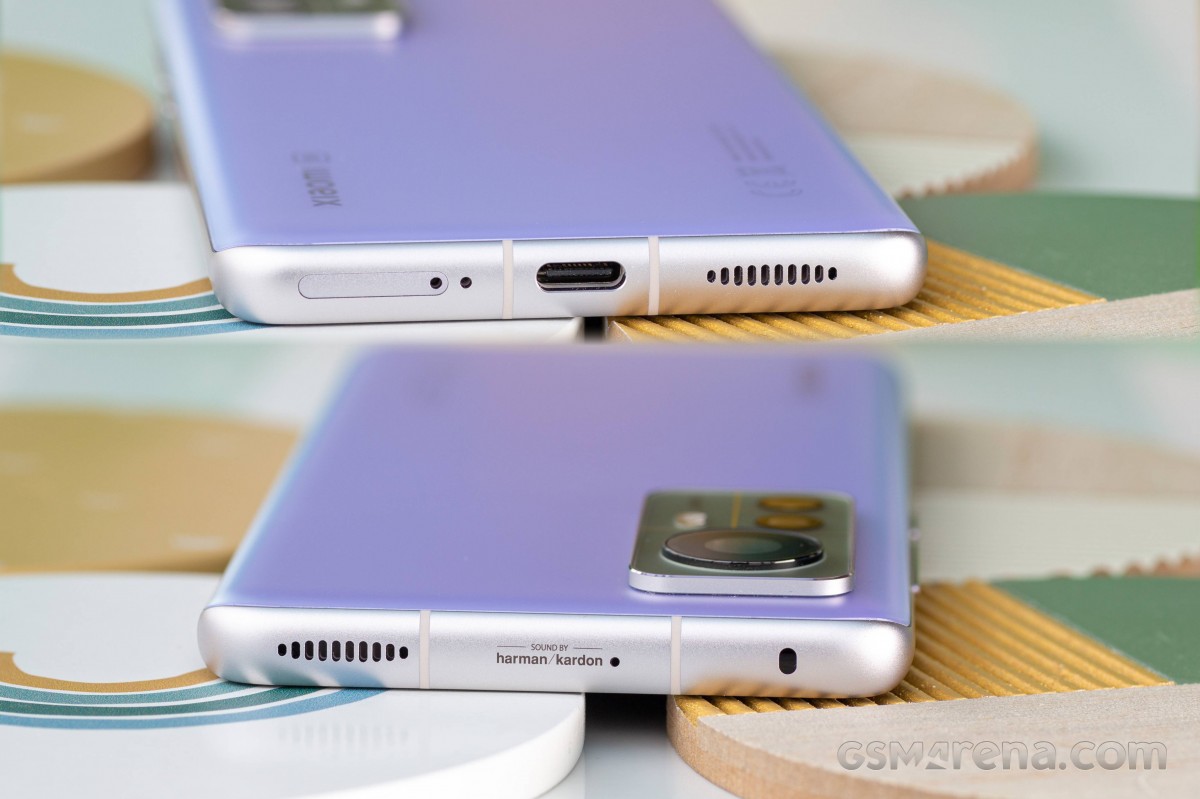 The Xiaomi 12X has no official IP certification, meaning it is neither dust- nor water-proofed. Still, a Xiaomi rep has confirmed for us that all three Xiaomi 12 phones have limited dust and splash insulation. And it is very much evident when we pop the SIM tray open. It's not great, obviously, but it is still better than nothing. 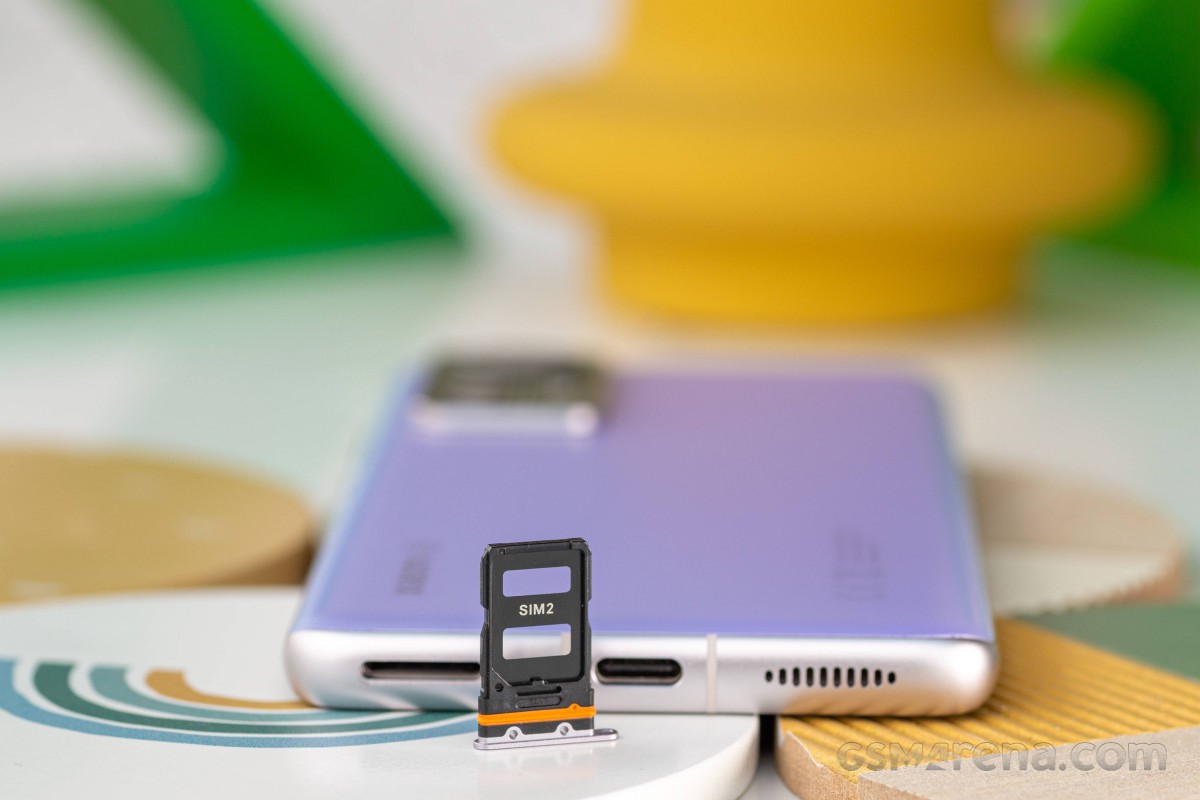 And now, let's take a closer look at the Xiaomi 12X.

The brand-new 6.28-inch 12-bit AMOLED is at the front. It has all sorts of premium tricks like 120Hz dynamic refresh rate, 480Hz touch response, HDR10+ and Dolby Vision support. The screen bezels are minimal, and the perforation for the selfie camera is nicely small. 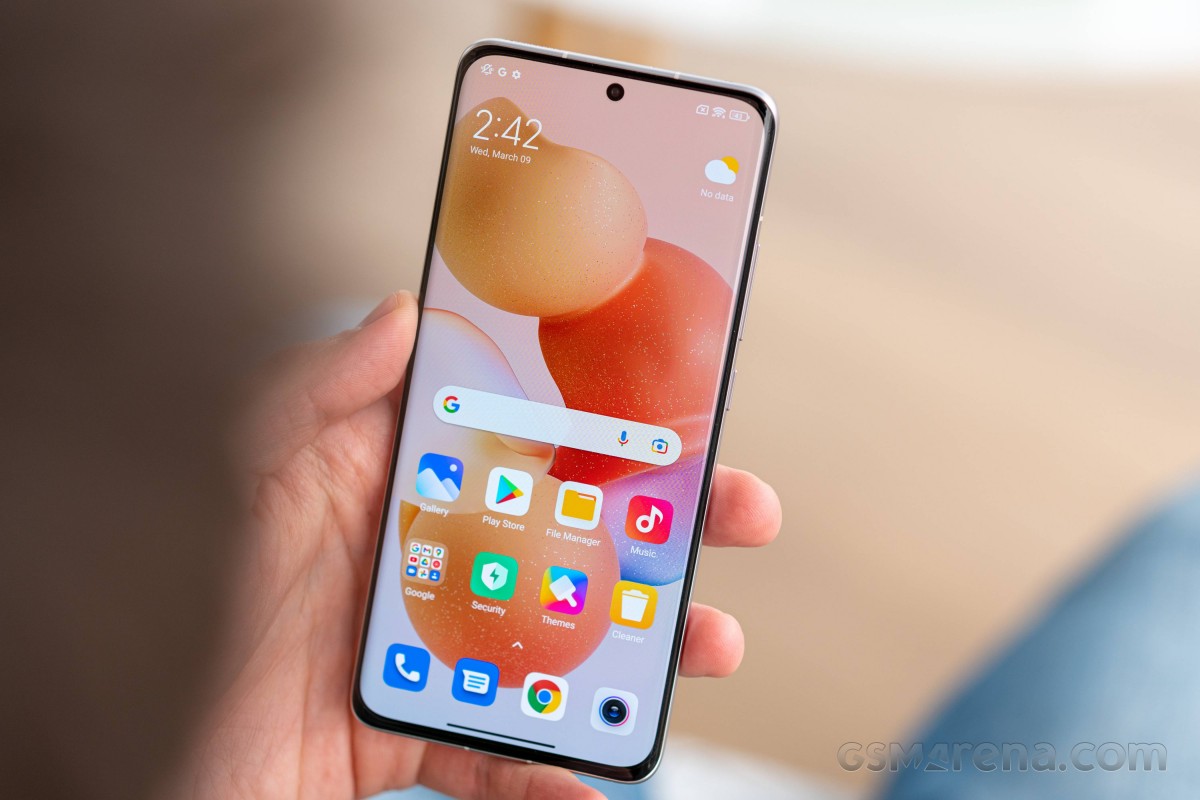 There is an under-display fingerprint scanner, and it works nearly flawlessly. The sensor wakes up the moment you touch the glass, and then scans and unlocks the phone in an instant. It is among the fastest scanners we've experienced, and we have no complaints. 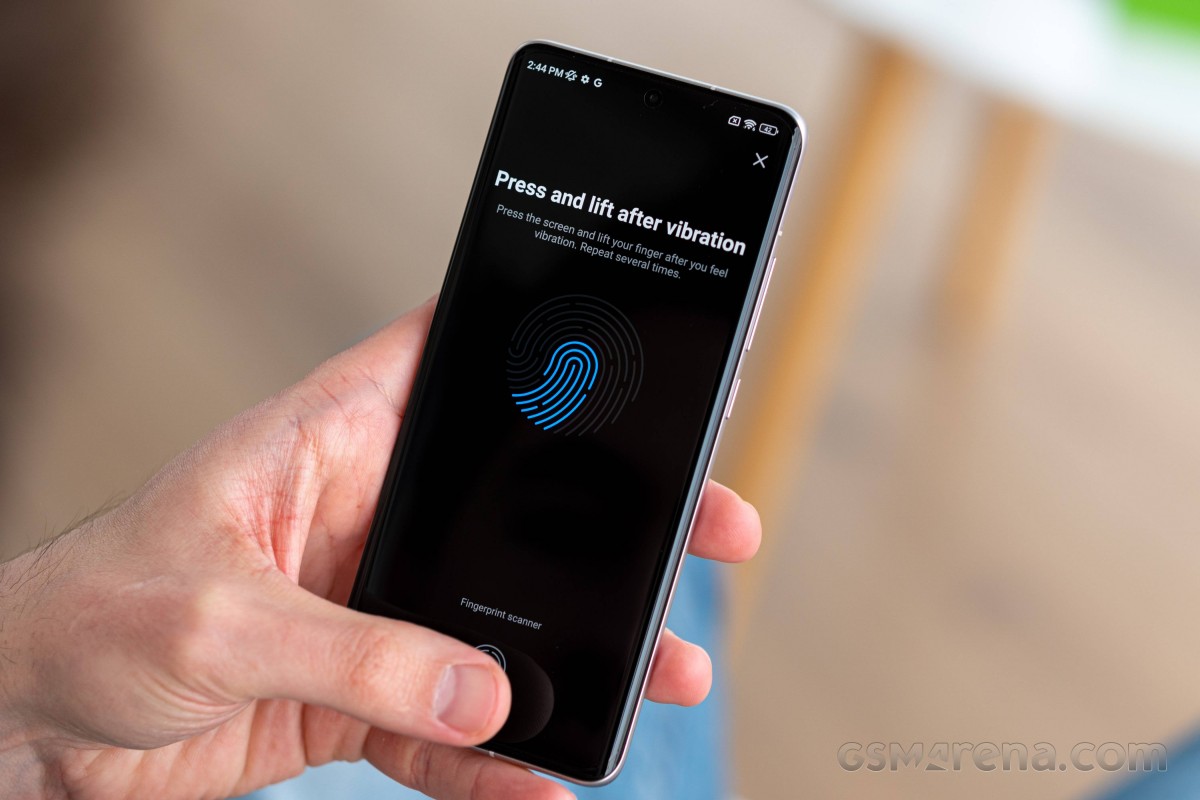 Above the screen, there is this almost invisible and incredibly thin outlet. This for earpiece purposes - the sound is coming from the top speaker. We've played for a while during calls and then YouTube videos and found out that audio is coming from both outlets - top and front. During calls, it's more directional, and you will clearly hear it from the front outing, while during media playback the sound gets out from everywhere - front, top, bottom. The experience is outstanding, so you should have no worries here. 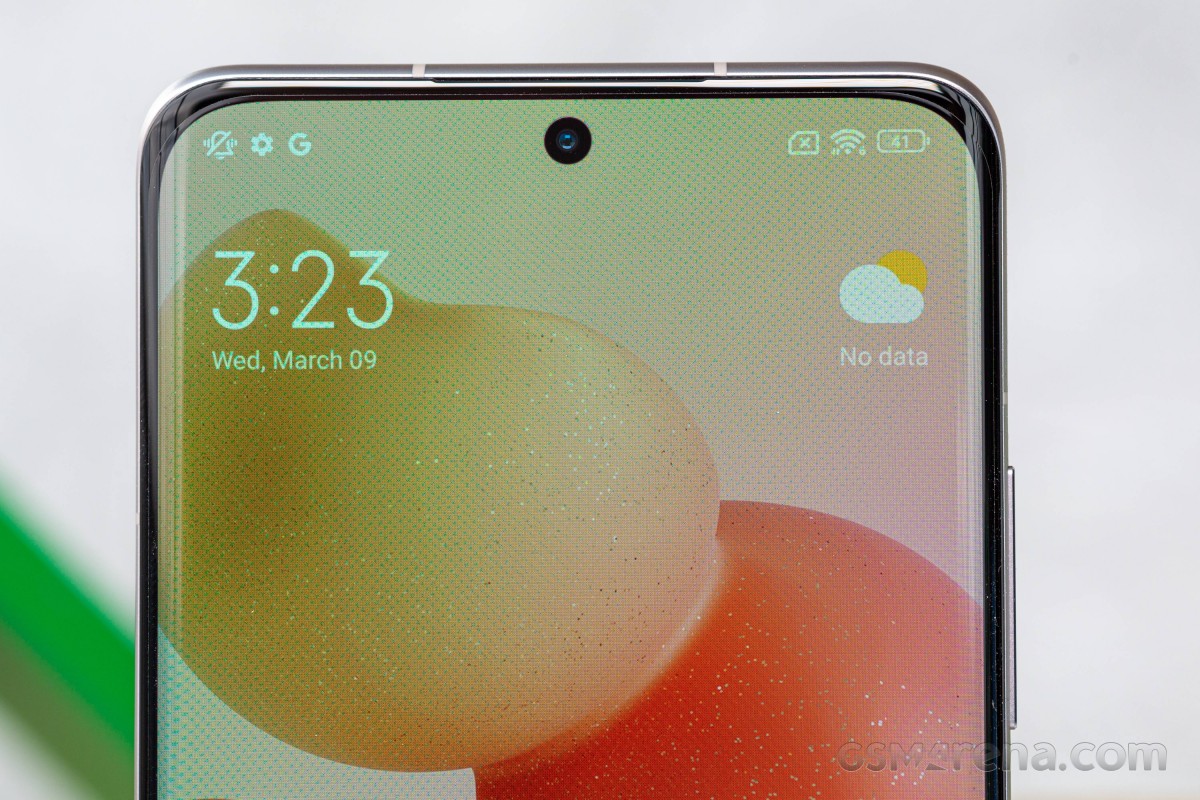 And while we are talking about calls, the Xiaomi 12X features a virtual proximity sensor, like the Xiaomi 12 and 12 Pro. It works much better than expected, but it has its issues as it relies on numerous factors, including accelerometer input, and sometimes it may just fail because of wrong/inaccurate input.

The back of the Xiaomi 12X is beautiful and stylish. We have the purple 12X, and it's eye-catchy and with a matte, frost-like finish. Fingerprints and smudges do stick on this Gorilla Glass piece, though they are not as evident as on the black model. The purple hue is not eye-popping, and if it catches a bright light ray, it will disperse it in a cool way. 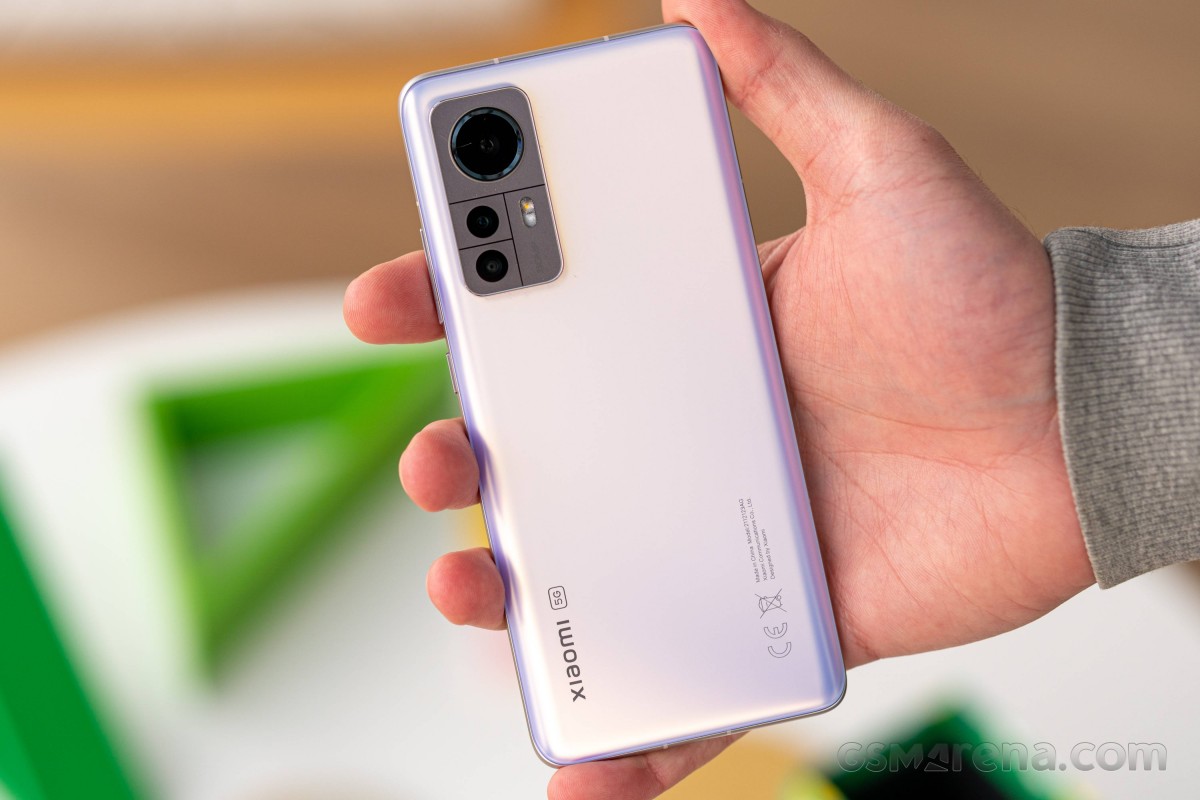 The only feature of interest on the back is the rectangular camera island that's made of an aluminum block. It contains the 50MP primary camera surrounded by a small metal ring and the flush 13MP ultrawide and 5MP macro cameras. The flash is also around.

The camera setup is jutting out a lot and makes the Xiaomi 12X wobble on a desk. If that's too annoying for you, the supplied case will reduce the wobbling. 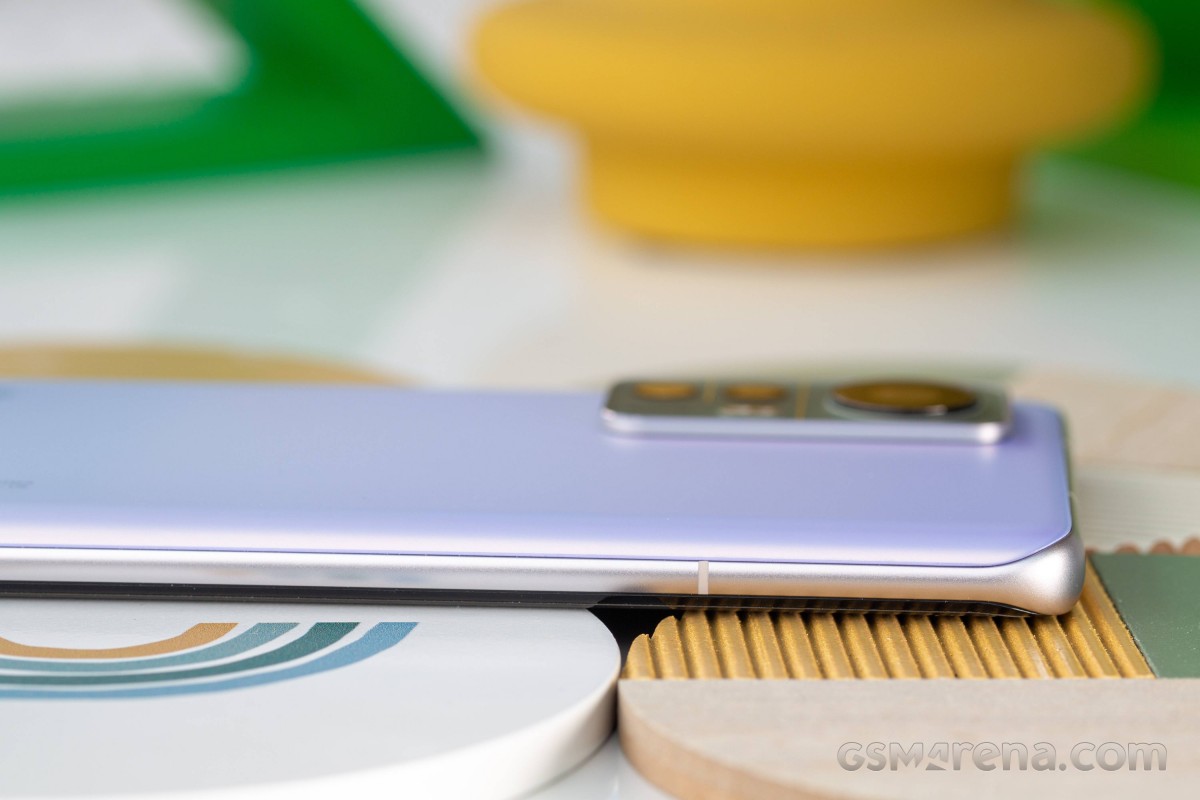 And now, let's look around the frame. There is nothing on the left side of the 12X. 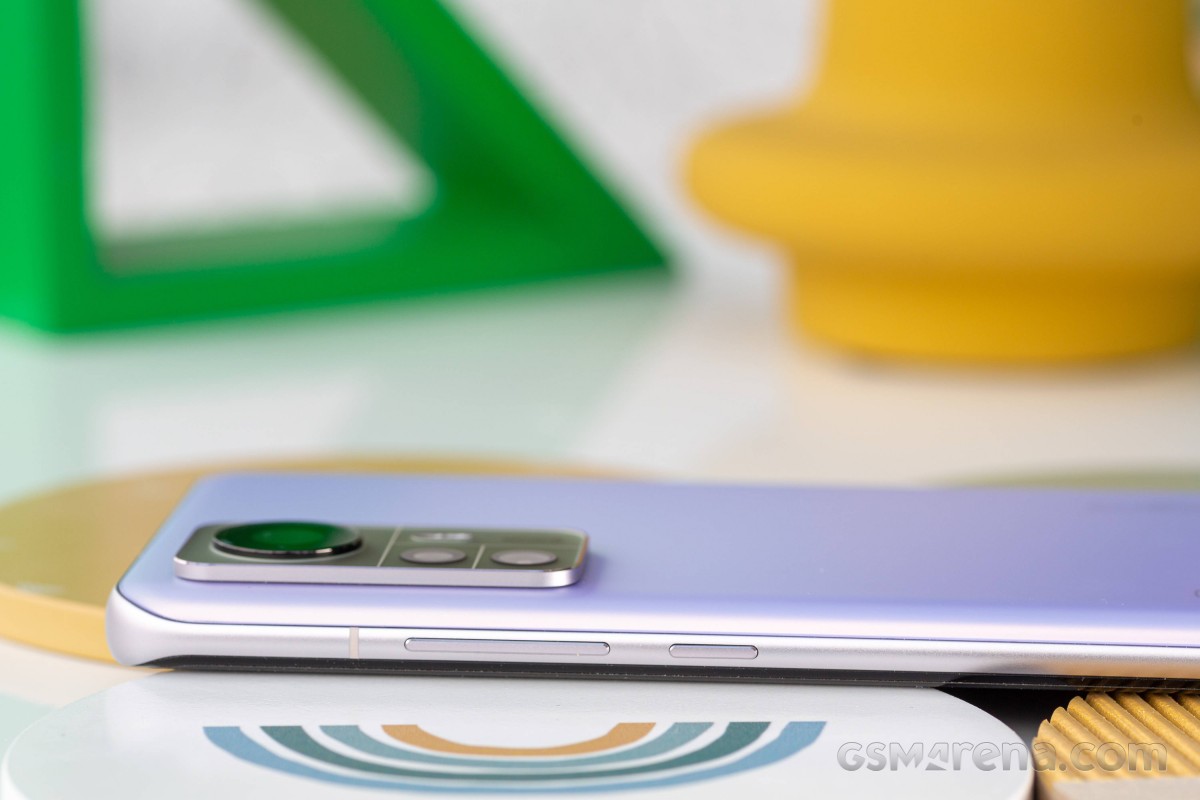 The volume and the power/lock keys are on the right, as usual. 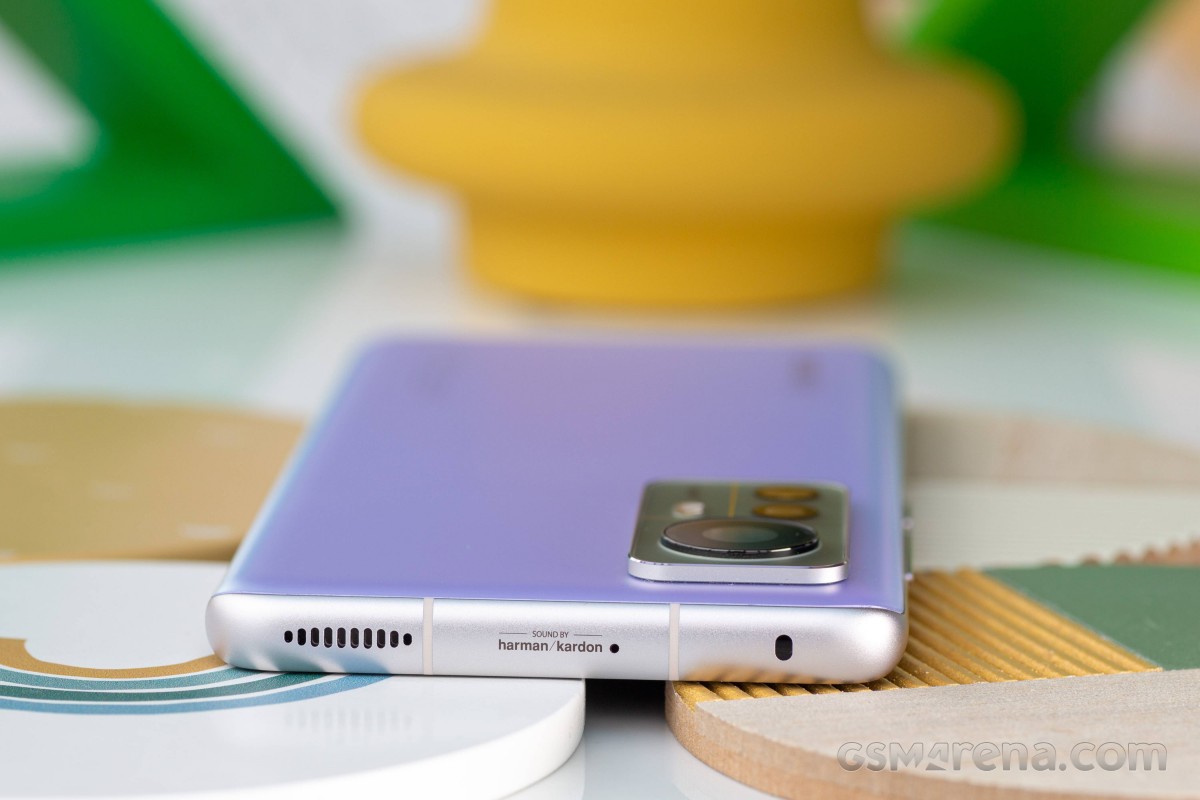 One of the speakers, the IR blaster, and a secondary microphone sit on the top side of the Xiaomi 12X. 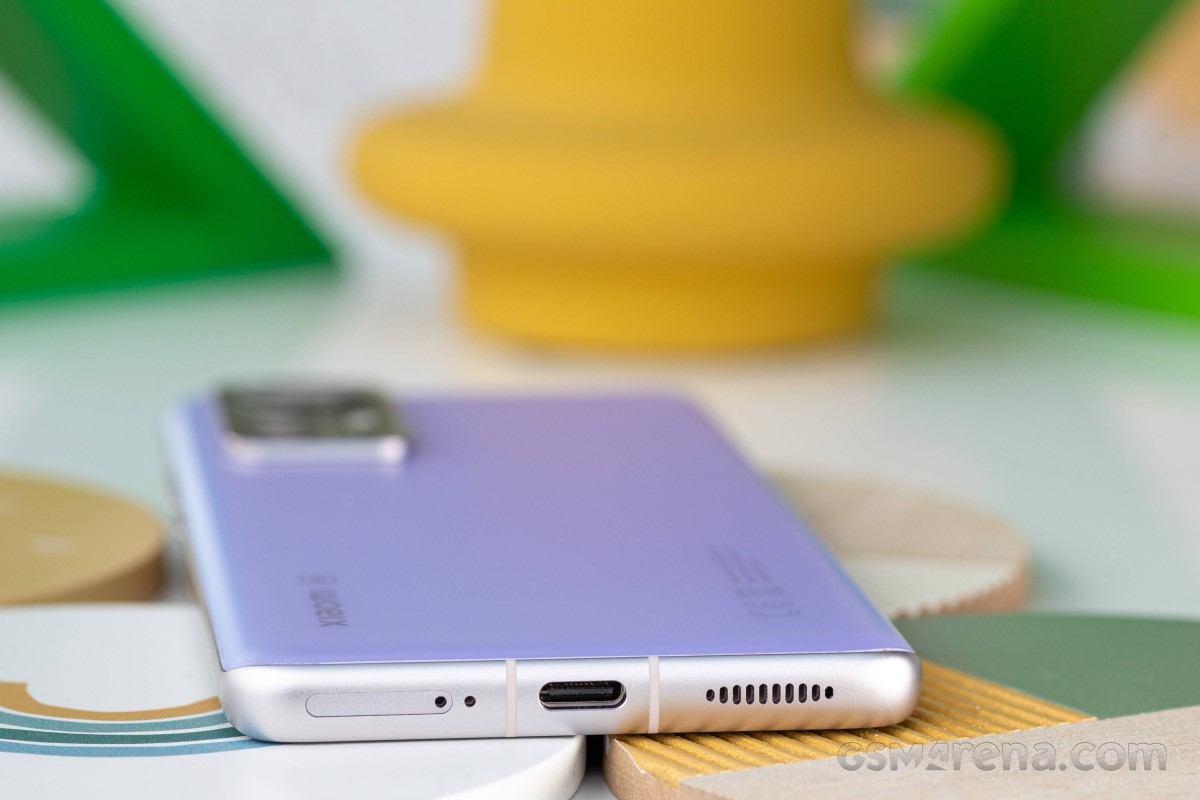 The bottom houses the primary microphone, the other speaker, the USB-C port, and the dual-SIM tray.

The 12X handling experience is outstanding - it's compact and lightweight, with a solid and grippy enough build, as well as a beautiful yet not flashy design. The Xiaomi 12X is easily operated with one hand on the go, which is quite nice and will be appreciated by the users which appreciate this. 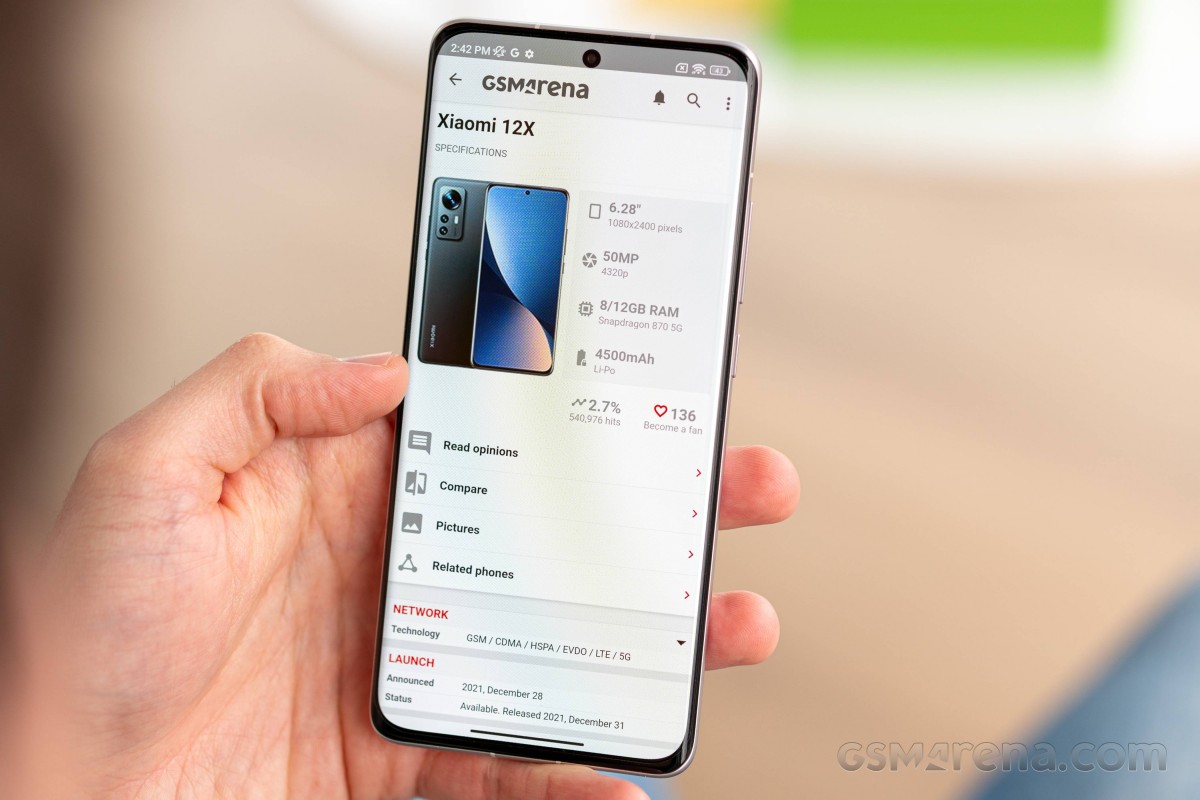 There is only one caveat on the Xiaomi 12X and that's the basic splash protection that isn't even officially mentioned. We have been hoping for years for Xiaomi to enhance its flagships with proper ingress insulations, but it seems the Ultra models are the only ones to be treated this way. Oh well.

No clue, I got all those options on and yet my SOC is between 6-8h depending on usage, maybe 5h if I play whole day, but still not 4h.

Hi, I wonder when you say good battery could you please give some details. I have xiaomi 12x 8/128 and I get around 4 hours screen on time with 120hz 5G bluetooth and data on.

Anyone who has Xiaomi 12x global version has HDR setting in your VIDEO recording? If yes please state your country...