The Black Shark 4 adopts a typical glass sandwich build but contrary to our expectations, the official specs sheet doesn't mention Gorilla Glass at all. So we assume regular glass has been used not only for the back, but for the front too. The side frame is looks and feels like anodized aluminum, but we can't confirm for sure. 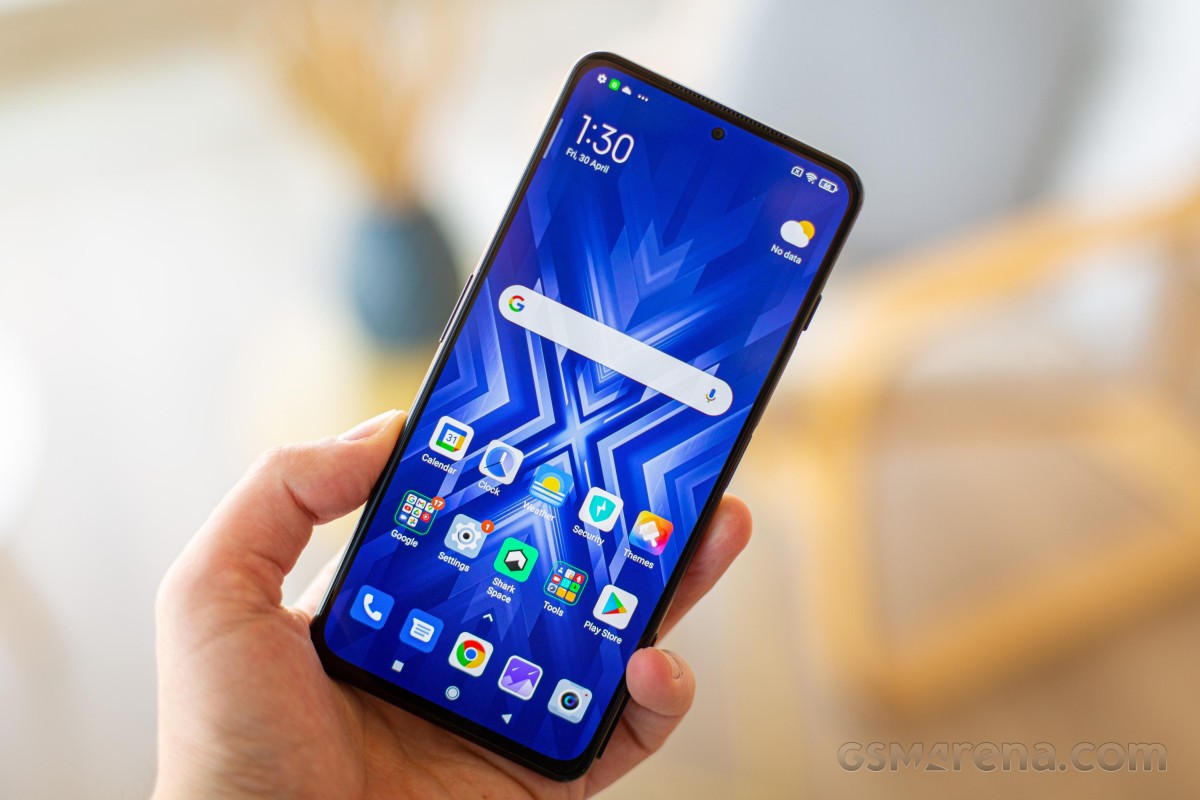 Given the weight of 210g, however, it's quite possible that Xiaomi has indeed used glass and metal for the chassis. The battery is definitely not a major contributor to the overall weight as it's just 4,500 mAh in capacity. On the other hand, the cooling system could be tipping the scales. As far as weight distribution goes, the handset does feel a bit top-heavy, but it's balanced overall. Long gaming sessions don't seem to cause discomfort.

One-handed usage, though, is a bit of a challenge. The phone features a tall 6.67-inch display, so reaching the top bezel is hard. The more aggressive curves of the back help a bit, but the rather thick profile of the phone (9.9mm) means handling is hardly a breeze. 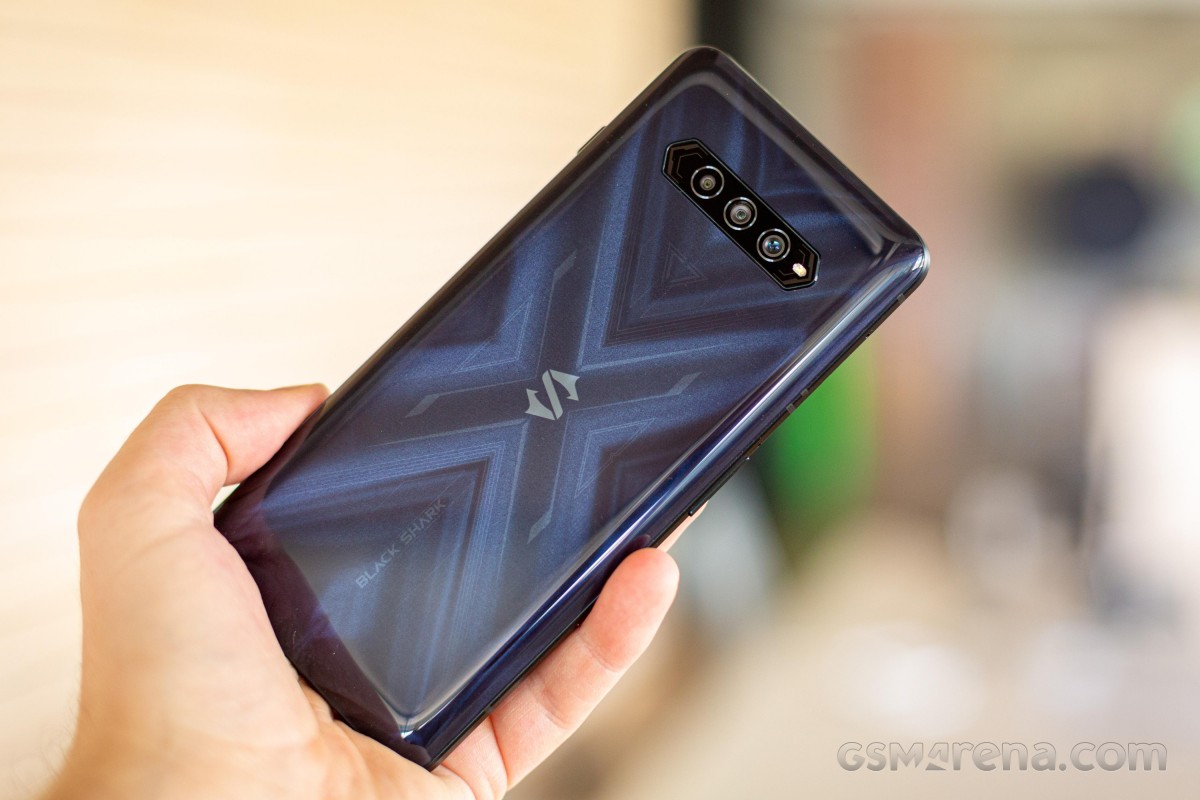 Speaking of the back, it features cool patterns in typical Black Shark style that change as you turn the phone at a different angle. The gradient almost makes it look like brushed aluminum. At least the Mirror Black version of the phone that we received. This color and design also make smudges and fingerprints hard to notice. 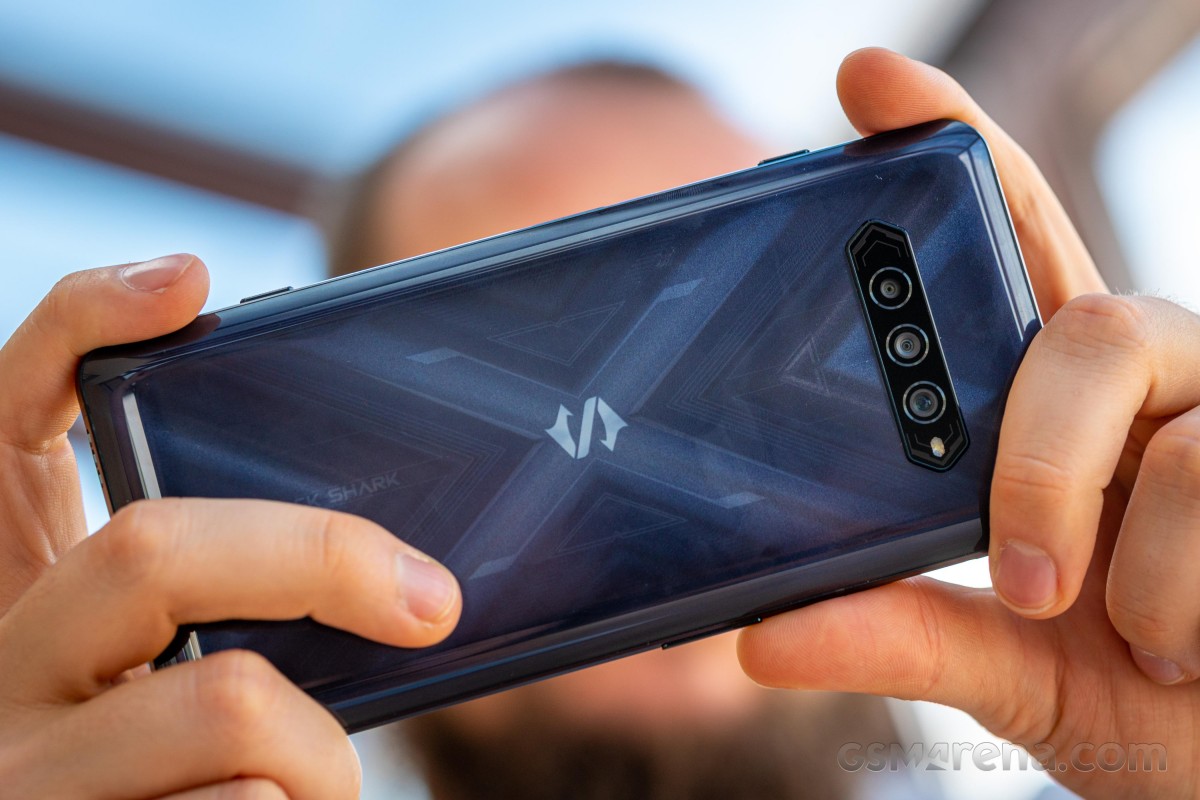 The camera bump is rather unusual for 2021 trends. The shape of the module goes in line with the Black Shark aesthetics, and since the body of the phone is on the thick side, the bump doesn't protrude as much. It almost lies flush with the back panel. 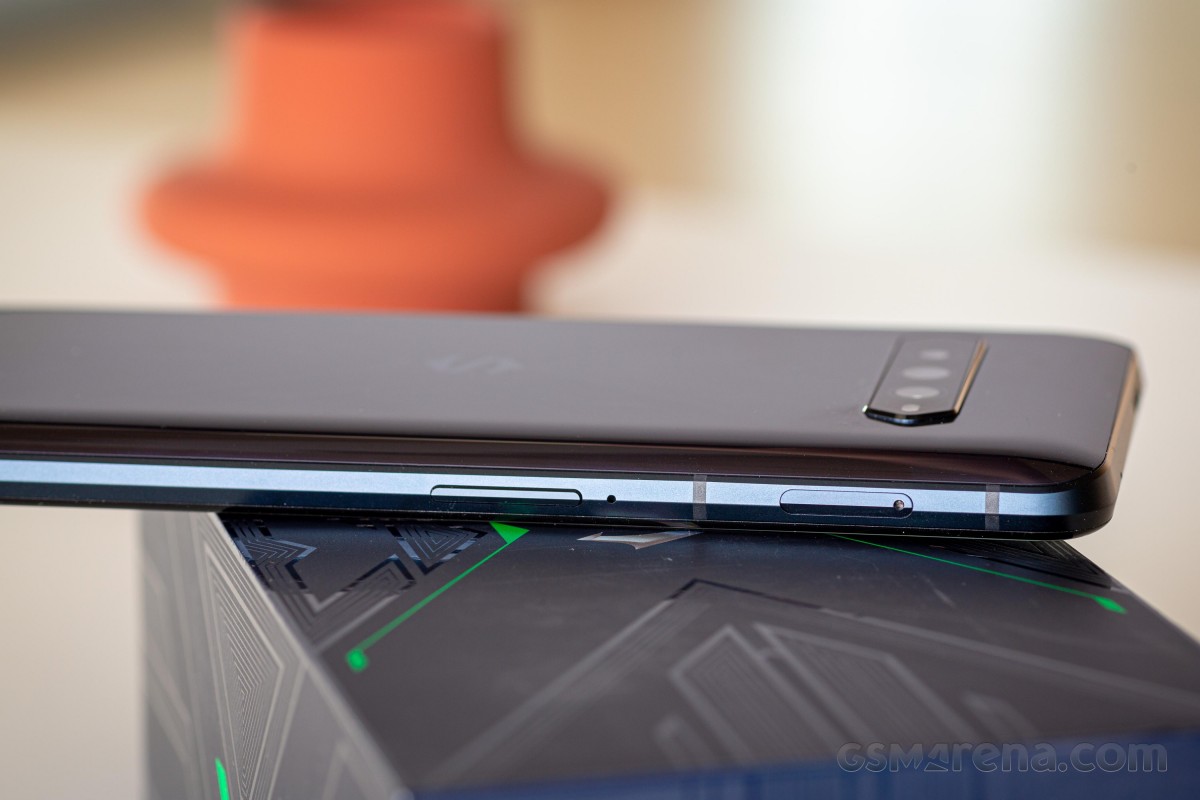 Unlike most gaming phones, the Black Shark 4 goes the punch-hole path instead of using a thicker top bezel. This means that the front-facing camera will get in the way. Then again, we should give credit to Xiaomi for pulling off such a tiny cutout for the camera. The hole is really tiny but still renders a small portion of the screen unusable. You can still disable "the notch" from the settings menu, of course, but this will cut out a significant portion of the screen. 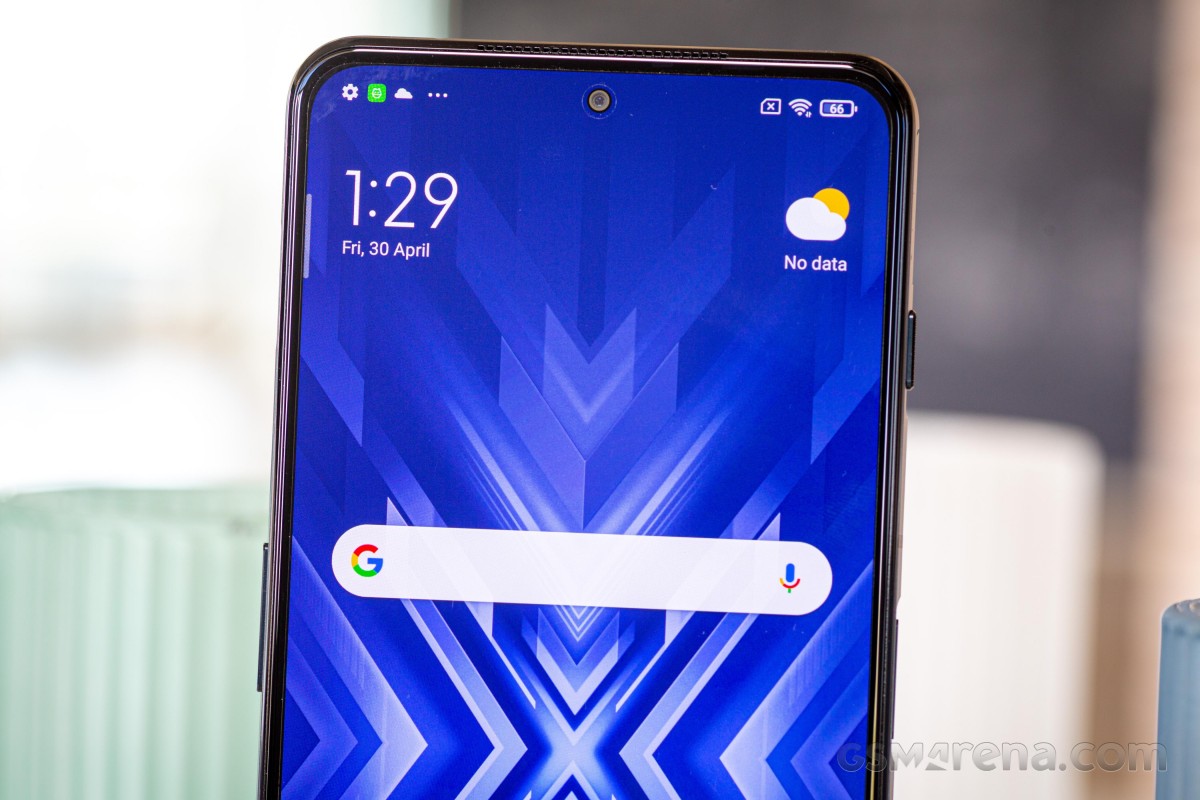 The silver lining is that all bezels are petty thin, even the chin. It gives the phone pleasant and premium looks.

The side frame is unorthodox too. It's not oval and has a clear-cut edge. However, that doesn't make the grip uncomfortable in any way, Xiaomi didn't go overboard with the sharpness of the edge.

The volume rocker is on the left, accompanied by the SIM card tray for the two SIM cards, as there is no microSD card support.

The power button that doubles as a fingerprint reader sits on the right side of the frame in a shallow cutout, right in the middle, so you won't press it accidentally during gaming. We also found it to be easy to reach with the thumb. The power button is surrounded by two flip switches that "unlock" the physical shoulder triggers. The switches make a satisfying click in both positions and are perfect for fidgeting.

As far as the triggers are concerned, they feel really good. They offer good tactile, clicky feedback but fall a bit on the shallow side. The key travel isn't amazing, although some design limitations are probably at hand, and so Xiaomi had to work with the available space it had. 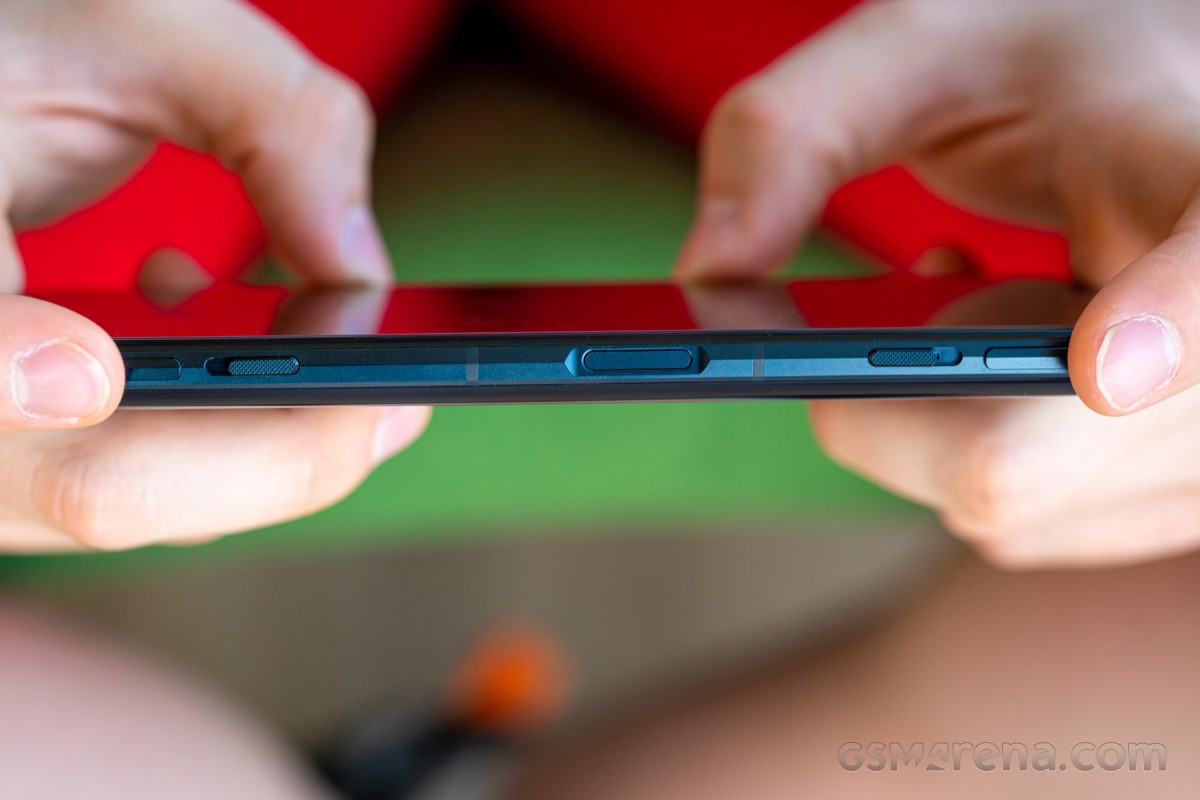 Apart from not incorporating at least some sort of Gorilla Glass for the front display and the use of a punch-hole design instead of a standard bezel are our only complaints. Even the weight and thickness didn't bother us. The phone feels solid and rather secure in the hand.