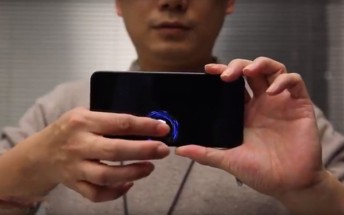 Xiaomi is mostly know as a market disruptor with its low prices and aggressive marketing, but the company is catching up to competitors on the technology and innovation side. While it wasn’t the first company to introduce a notch or a waterdrop cutout or a tall screen or dual cameras, Xiaomi is now aiming to change that.

Lin Bin, the president and co-founder of Xiaomi, posted a video on Weibo, demonstrating a smartphone prototype that uses next gen under display fingerprint scanner. You can set up your finger with only one tap and then unlock the locked screen with pressing pretty much everywhere.

According to Lin Bin, the unlocking area is 50 mm by 25 mm, which is more than five times the UD area now and over 15 times the standard scanner on the back, used by Xiaomi. And it’s not only big - it is fast and reliable, at least according to the video. We even see someone unlocking the phone without looking at the screen.

While the technology looks great and is clearly tested on a phone with a Xiaomi Mi 8 front, Bin says if the innovation has great reception among fans, the company will consider placing the scanner in future devices. Until then we’ll have the vivo APEX concept to keep us warm at night.

no that is xi kingpin

I think you missed sharp's "aqous" line. Compare it to your so called mi mix innovation. Have fun and goodluck :)