The Xiaomi Mi 9, like most flagships these days is made of glass, with thin metal frames. It is available in Piano Black, Ocean Blue, and Lavender Violet, as well as in faux Transparent Edition. The blue and violet models have some nice gradients on the back, while the transparent looks kind of futuristic though the chips you see are actually a cool looking plate under the back glass and not the real chips. 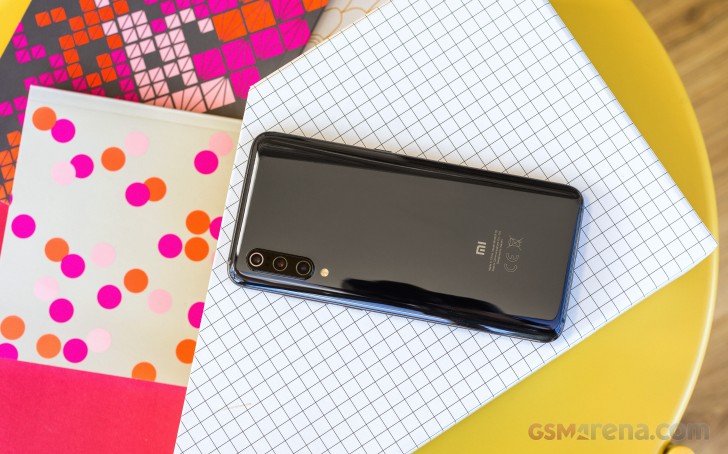 Some might say our Piano Black option is a boring one having all of its rear panel in flush black, but it's a looker nonetheless. Glossy, prone to fingerprints and smudges, and yet mesmerizing.

The whole back is made of a Gorilla Glass 5 piece bent towards the frame. There are ups and downs with these rear curves - they do make the Mi 9 look and feel thinner than it actually is, but it hurts the grip big time.

The polished metal frame, also curved, isn't helping the handling greatly either, but it surely boosts the looks. Safe to say then, that Xiaomi favored beauty over practicality - and those feeling that's the wrong way to go about things can just use the case included in the box. 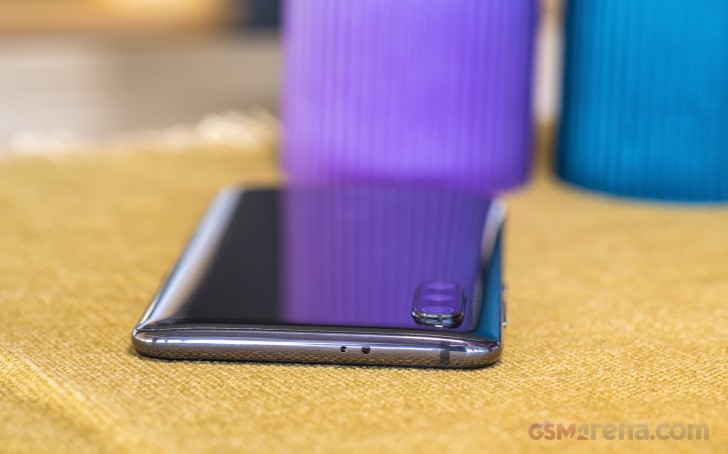 The back of the Mi 9 has the phone's standout feature - the company's first triple-camera. The Mi 9 camera hump holds the primary 48MP sensor with Quad-bayer array that spits 12MP images, the 12MP telephoto camera, and the 16MP ultra-wide camera. None of these snappers have OIS, which is a bummer - the Mi 8 had 4-axis OIS.

The camera is bulging a lot and the Mi 9 will wobble if you place it without a case on a flat desk or table. It's just the way things are - large sensors require space and there's no way they can fit in modern slim flagships without creating a bulge. As long as the quality of the shots is worth it, we would be more than happy to live with that. 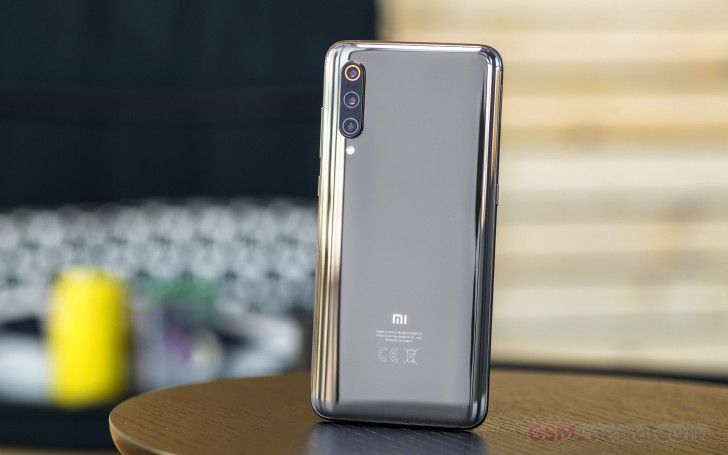 A nice accent is the thin reflective ring around the 48MP sensor. Its color changes as it catches the light from various angles and it looks really cool. 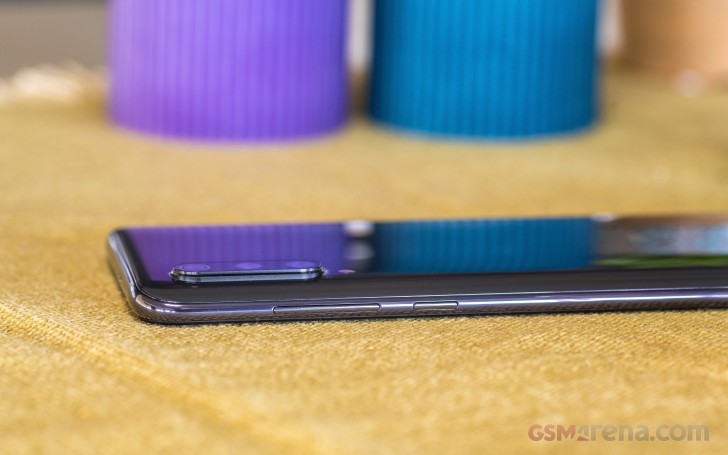 So, other than the triple-camera and the flash, there is nothing else to disturb the Mi 9's back. Let's flip the Mi 9 then.

The whole front is home to the Super AMOLED screen, this time 6.39" in diagonal, but still 1080p+ in resolution. It is taller than the 6.21" unit on the Mi 8, but the Mi 9 grew very little in size. Instead, bezels were cut, and the notch has been shrunk to the trendy waterdrop-shape. 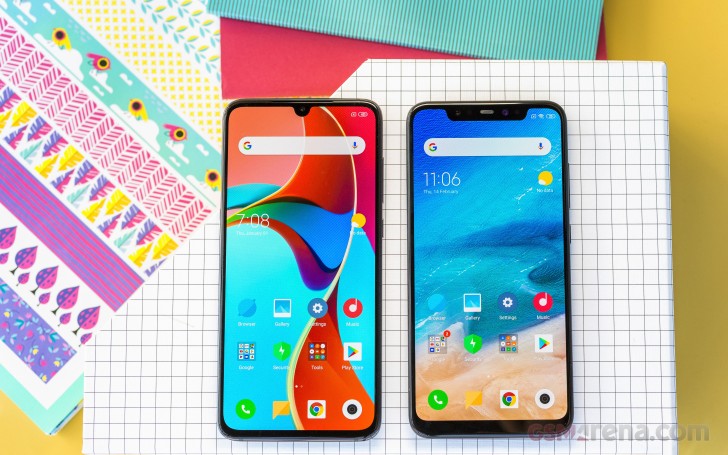 There is no special face unlock for the Mi 9 as the small notch can't fit the extra hardware required for it. The cutout contains the 20MP selfie camera and nothing else. 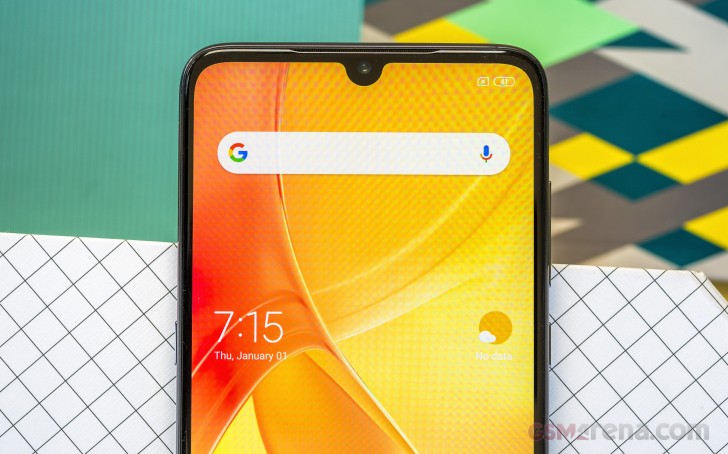 As you can see, the earpiece grille is long but very thin, etched in the edge of the screen's Gorilla Glass 6. And while you can't really see it when it's off, there is one very small white LED for notifications just below the right end of the earpiece.

The ambient light sensor is concealed beneath the screen around the top left corner, in case you were wondering.

Also hidden under the screen is the fingerprint scanner. That's right, the Mi 9 has a UD reader, which is quickly becoming the norm these days. 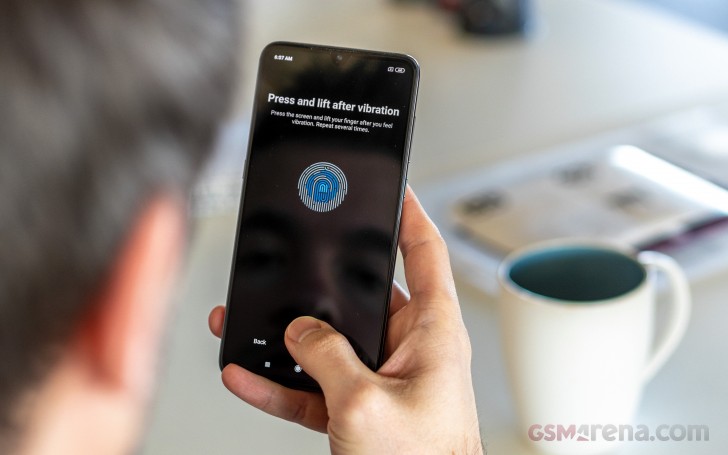 Configuring the scanner is easy, it works quite fast and we found it very accurate. Sure, it's not as blazing-fast as those conventional scanners we often see on the back of the smartphones, but it comes close enough so it doesn't make a great difference in daily usage. 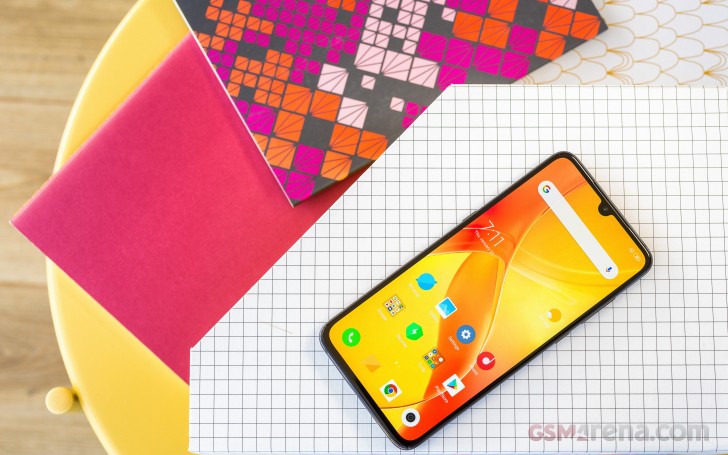 Xiaomi retired the audio jack a few years ago, so it's not surprising it's missing on the Mi 9 as well. The phone has a single loudspeaker and it's at the bottom, next to the USB-C port.

Infrared blaster is available, at the top, making a return after the Mi 8 didn't have it.

The Mi 9 doesn't allow for memory expansion, the card tray can take two nanoSIM cards and nothing else.

Finally, there is a side AI button, which launches the Google Assistant on international units and the company's own Xiao AI. You can reassign its press-and-hold and double-click functionalities but you have little to choose from - open front or rear camera, the flashlight, switch to reading mode, or go to previous app.

The Mi 9 looks great, no two words about it. The glass design has long lost its novelty factor, but its sleekness and simplicity are timeless. And the build quality is excellent, which combined with the AMOLED with an UD fingerprint give a nice premium vibe to it. It's very slippery and a smudge magnet, though, which is something you should keep in mind if you don't plan on putting a case on it.

Im use this one since 2019 and no issue yet. Such a greatest mobile phone i ever use ❤

I assume your Mi 9 was a China rom. May I ask what is the problem with your Mi 9? I am using a global version Mi 9 for 1.5 years and so far no major problem.

When I was living in China one of the question I always from myself was why chinese people get to used to buy other countries goods instead of chinese last year I got a MI9 not after one year because of some problem which I did not have with my last ...