MIUI 8.5 on top of Android Nougat

The ample Xiaomi Mi Max 2 comes with the proprietary MIUI 8.5 out of the box. The launcher is based on the latest Android 7.1.1 Nougat operating system, though you shouldn't expect all the Nougat key features to make an appearance in MIUI.

As usual, Google services are not accessible in China, so Xiaomi refocused the ecosystem away from Mountain View's services. For those living elsewhere, the official and not-so-official importers are providing various international (global) ROMs, which come stripped from the Chinese services in favor of Google's. Our unit uses one of those global ROMs with support for multiple languages. 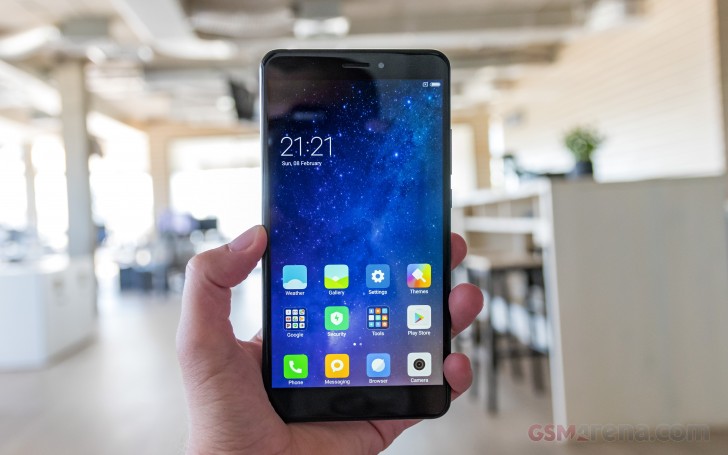 MIUI 8 is a familiar launcher already with lots of features and UI tweaks. Its looks are just a minor part of the way MIUI is different from stock Android, though.

Dual Apps and dual spaces are some of the highlights in MIUI. Dual Apps means you can have two instances of the same app on your device. This allows you to do things like have two WhatsApp accounts on the same phone, one for each SIM. You can enable dual-app functionality on almost every app.

Dual spaces lets you have two different workspaces on your device, each with its own set of apps, customizations, and image gallery, and you can enter a custom passcode or a different fingerprint to enter either space.

The lockscreen is rather trivial (time, notifications, a couple of shortcuts), but once you set up the fingerprint reader, you'll rarely see it anyway. Still, the Wallpaper Carousel can put beautiful images on the lockscreen every 15 minutes.

The always-on fingerprint sensor is accurate and can take the phone from sleep to the homescreen in a flash (the lockscreen is bypassed). It's as fast as some of the latest flagship implementations, which is quite a treat.

MIUI has a simple philosophy - every shortcut, plus widgets of your choosing, are dropped on the homescreen. You get a docked menu for the most commonly used apps, of course. The homescreen also supports a wallpaper carousel, so you can enjoy different beautiful wallpapers all the time.

If you happen to have difficulties controlling MIUI 8 with one hand on the Mi Max 2's super large screen, and you will, then the Quick Ball option comes in gandy. It can store up to 5 shortcuts and you can put pretty much anything here - from Android actions to app shortcuts. The Ball can also hide automatically on chosen apps, and move aside when you are running a fullscreen app.

Finally, Xiaomi will be offering an exclusive (for now) Split Screen feature on the Mi Max 2 with the upcoming firmware update (late August). It will allow you to launch two apps side-by-side - so far demonstrated only in portrait mode with one app on the top and one - the bottom. Xiaomi says all native apps will support it, while the third-party ones will need to be updated. It's unclear for now whether those Play Store apps already supporting other split screen solutions would need additional work for this one or not.

Obviously not, even with its promising specs like 4gb of ram and octa core it starts to slow over time. I mean it works ok except it's downfall is it's huge size, you would have thought a phone this size would be great well try walking around with it...

What do u mean? It's still good after using it for 2 years

Its a sweet phone.But wandering if its a grade A phone like Samsung or Iphone and not a grade 2 handset