Unlike the Mi Mix and its fancy unfolding black box, the Mi Note 2 comes in a plain white box. Typically for a Xiaomi smartphone, the bundle doesn't include a headset - you can grab a pair of Xiaomi's Piston earbuds for a few dollars, but you just don't get them in the box.

Retail package • charger, cable and a bumper case inside

What you will find inside the box is a beefy QuckCharge 3.0 charger and a USB-A to USB-C cable - so no Type-C to Type-C connections possible with the bundled accessories.

Additionally, Xiaomi has thrown in a plain transparent silicon case - far from the sleek leather case of the Mi Mix in terms of style, but similar in function.

The Mi Note 2 measures 156.2 x 77.3 x 7.6 mm - the Galaxy Note7 managed to fit the same sized screen in a smaller footprint. You can't buy one, though, can you? You can get an iPhone 7 Plus and that one is larger than the Mi Note 2 despite the smaller display diagonal. The S7 edge, meanwhile, combines the best of both worlds - the curved edges and compactness. If you're into neither of that, the Mi Mix will give you a ton more screen estate than the Mi Note 2 for a marginal bump in size.

We know you know it, and we've also said it ourselves a number of times, but the Mi Note 2 looks a whole lot like a Galaxy Note7. The large screen form-factor, the dual-edged display, even the home button - it's as if the Mi Note 2 was one of the early prototypes for the Note7, abandoned only to come back to life in the form of a Xiaomi device.

We've seen that face before • Wait, that's not TouchWiz. Or was it Grace UX? Not that it matters anymore.

Don't get us wrong, we're not trying to blame one or the other for copying, we're just looking at the devices and stating the obvious. Or rather, looking at the Mi Note 2 and photos of the unfortunate Note7, which we duly returned to Samsung when prompted to. We do have the S7 edge around for some edge comparisons, but the Mi Note 2's shape is a lot more like the boxier Note7.

Xiaomi Mi Note2 next to the Samsung Galaxy S7 edge

The star of the show is the dual-curved display. While it does make for headlines, it's actually nowhere nearly as curved as the S7 edge's. The Mi Note 2 also has some wider bezels than the Samsung flagships. In any case though, it's an attractive design element, even if it serves no practical purpose other than make your fingertips feel privileged. 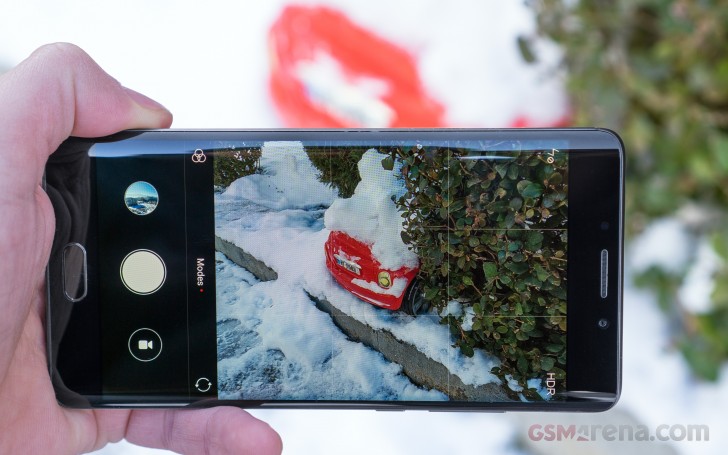 Which brings us to the Mi Note 2 and its mechanical home button/fingerprint reader - sort of like the Mi 5, only more generously sized. But don't think that's because of some Mi Note traditions, no - the original Mi Note (and the physically identical Mi Note Pro) had a row of capacitive keys up front and skipped on fingerprint recognition altogether - you could go away with that two years ago. Okay, here in particular we're inclined to suspect a deliberate attempt to make one Note look a little more like the other.

Above the display it's business as usual - earpiece flanked by ambient light/proximity sensor and a front-facing camera. The notification LED is on the left side.

Flipping over to the back, you'd be greeted by your fingerprints more often than not. The glass back is a nightmare to keep clean but that's by no means exclusive to the Mi Note 2 - it's just how glass works. And it's not like the high-gloss ceramic on the Mi Mix is any easier to maintain.

While we're not into scratch tests, going by the materials the glass Mi Note 2 is likely more prone to scratches than the ceramic Mi Mix. Inside the box you do get a case to protect it, but it's not as fancy as the leather one of the Mi Mix.

The back is minimalist to the extreme - other than the camera and the dual-LED flash there's nothing to see here.

Shiny glass back with nothing but a camera and flash

The Mi Note 2 feels thinner than the S7 edge, which it is, but the 0.1mm difference is marginal on paper, while subjectively it's a bit more substantial. We attribute that to the proportions - the overall larger footprint of the Xiaomi phablet combined with more or less the same thickness actually makes it feel thinner.

Xiaomi Mi Note 2 in the hand

The symmetrical shape of the aluminum frame helps too - if you're only presented with a side view of the Mi Note 2, you'd be hard pressed to tell which way is front. Samsung did pretty much the same with the Note7, while the S7 edge's face is noticeably more curved to the sides than its back. The thin frame will do you no favors when trying to pick up the Mi Note 2 when it's lying flat on a table - you just don't get enough grip surface for your fingertips.

Now, which way is front

Both the power button and the volume rocker are on the right side - some of us here say that's not the correct placement and each should get its own side. Others couldn't care less. We figure it's the same with users. The card slot is on the left and we're unanimous in our lack of preference for its location. Mind you, the Mi Note 2 takes two nano SIM cards, but no microSD card for storage expansion.

On the bottom you'll find the USB Type-C port, which only adheres to the USB 2.0 spec. To the right is the loudspeaker, while under the other identical grille on the left is the primary microphone - no stereo speakers of any kind.