A year is a long time in the contemporary mobile world and even if tablets could have it a bit easier than smartphones, a proper update can never hurt. In this particular case we're talking about the Xiaomi Mi Pad 7.9, which was announced back in March last year and is apparently due to be replaced soon.

Clues on the matter can be taken from a few hot leaked images of what is allegedly going to be the Mi Pad 2. The supposed future tablet has borrowed design elements from the Mi Note/Mi Note Pro flagship phablet pair, resulting in more refined looks than the all-plastic predecessor. 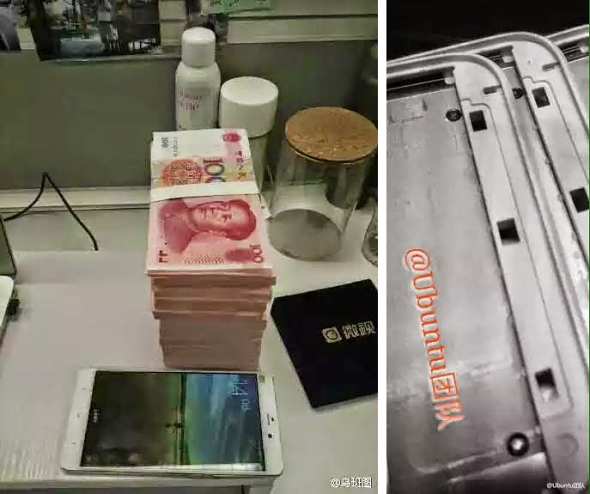 Actually, it's fair to say that it's a Mi Note, stretched to Mi Pad proportions, as the rumor has it it will pack a similar glass back and slightly curved front panel.

Additionally, the overall layout of the front is similar, with a central earpiece and sensor arrangement, an offset front camera and a Mi logo.

Now that earpiece hints at a 3G/LTE version as well, as opposed to the Wi-Fi only first-gen. The report claims that the new version will come with Android 5.0 out of the box, skinned with the company's home-brewed MIUI 6 overlay.

Sadly, there are no specs to accompany the photos, and we also have no way of verifying any of this, but it looks credible enough to be the real thing. Also... don't take the stack of bills as a reference to the device price - CNY100,000 translates roughly to $16,000, not really in line with current market trends.