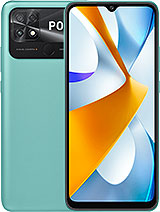 nadimhd, 15 Jun 2022Why would people buy it and not the Redmi 10c lolbecause phone sellers tend to force people to buy them. i hope no ones gonna buy it though. even if this phone released in indonesia, no ones still gonna buy it unless there are so many people are stupid at tech and they bought it for the design.

Yext, 14 Jun 2022It's a joke. Coolpad Cool 20s destroys this phone and ... morethe sad thing is my country dont sell coolpad phones anymore. i miss their phones though. they are compact to hold so i dont have to worry about using it 2 hands like my current 6.5 inch phone

Why would people buy it and not the Redmi 10c lol

It's a joke. Coolpad Cool 20s destroys this phone and costs the same.

This is hands down the worst phone ever released by Xiaomi and one of the worst phones in 2022.
The chipset is clearly for Redmi 11A or even Redmi Go.

This is the bottom of the barrel.

Wtf is that chipset, it's not much better than my old ass Exynos 7880. Not worth 140$, just get a used phone that's better than this, not hard.

daki, 12 Jun 2022looks like same with redmi 10cBecause it is the same, it just has an even worse chipset.

that 6000 mah battery and 6 nm snapdragon is a recipe for great endurance👍 furthermore the lower midrange chip is pushing only hd + pixel, this phone can get 3 days of normal usage if optimized properly..too bad maybe poco will never update this phone to next android ver. thats the only cons

Anonymous, 07 May 2022You realise just because it's a 64mp camera doesn'... moreMan no i am not.
Maybe Ulefone is not that bad but still rather like Oukitel than Ulefone.
But my main is now Xiaomi Mi 11 lite 5G.
Before had Moito X4 for over 3 years and still working perfectly and looks like brand new even sis 5 years old.

potato4k, 11 Apr 2022Why are the Chinese allergic to Android 12? Suspicious.Because good ol merican Google don't like the Chinese and Chinese brands doing well. Why they tried to bring down Huawei then Xiaomi. Competition is bad to apple and Google

CptPower, 13 Apr 2022Man ulefone is horrible brand. Rather Oukitel WP15. For... moreYou realise just because it's a 64mp camera doesn't mean it'll be good, that brand won't be using any quality cameras. Some terrible screen will be used aswell, worth almost nothing. $100 phone you're saying is value at $400, are you an iPhone user or?

Yet another "new" device with Android 11 when we are halfway to 13.