Xiaomi has announced a very impressive milestone today - the company has sold 200 million Redmi Note phones across the world. The series has been the maker’s bestseller since the arrival of the first Redmi Note in March 2014 and has been the driving force that pushed Xiaomi up to third place in the world.

The company also announced China will finally get the Note 10 series on May 26, and the country might get a new device as well, according to an official poster on Weibo. 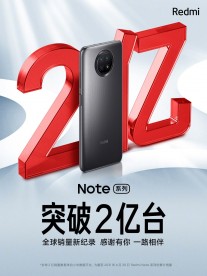 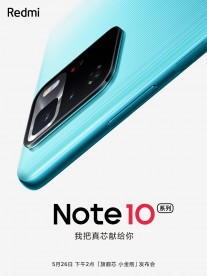 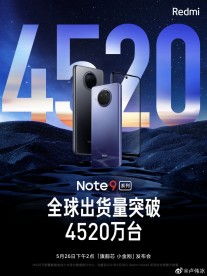 Xiaomi posters about the 200M milestone, the Note 10 arrival, and the Note 9 sales

The phone, pictured in the image has three cameras, lined up vertically. While it might look like the regular Redmi Note 10 5G, the dual-LED flash is actually positioned slightly higher, suggesting a different internal design and likely more changes. We'll just have to wait until next week to hear more details.

While Redmi is preparing for the local launch of the Note 10, its CEO revealed another milestone - 45.2 million Note 9 phones were sold all over the globe, which is over 20% of the total amount of 200 million sold since 2014.

This speaks volumes about the rising popularity of Xiaomi’s affordable brand and we can only assume it will go higher given the fact the Redmi Note 10 Pro and its siblings are among the hottest offers this year.

Did you get the redmi note 10 pro and where can I get one to buy in Accra?