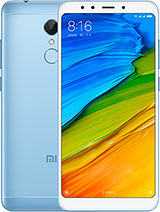 Anonymous, 13 Jul 2017hopefully the battery capacity of 3680mah is just roumered ... moreYes, no need for 1080p. It just makes phone slower than 720p in games and drains more battery, specially without LTPS screen or super amoled, and if there is no fast charging...
Looks like for really power efficient phone we have to wait for 10nm/7nm soc, i am sure by that time in couple of years almost every phone will ship with 5 000mah battery as there will be more room for it since process is smaller with still slim design.

hoping the battery life is the same or improvement from redmi 4.
However, higher resolution but smaller battery???
:( :( :(

should have been on the bottom as home key.. capacitive touch os somekind of obsolete looking. and please have other color options esp black..

AnonD-657131, 13 Jul 2017They look exactly like the S8's xiaomi cant do something or... moreNo it doesn't. It only has the same placement. So does many other phones. Stop whining you stupid samsheep.

And now allow me to drop to your level of stupidity.
SaMSung CoPIed XiAoMIS BeZEL lESs DEsiGn.

support otg( usb on the go) it's necessary

may be with new color
red,blue, green, yellow

hopefully the battery capacity of 3680mah is just roumered and that it hopefully will get at least 4000mah when it is official. although a 14nm processor is going to help it with battery efficiency, the 1080p display feels unnecessary to me at least. a 720p display on a 5 inch screen is just fine for me. plus, humans have a harder time distinguishing any display higher than around 300ppi. although I can see the difference between a 720p 5 inch display and a 1080p 5 inch display when im looking really closely. when im using a phone on a daily basis I usually hold it a couple inches or centimeters from my eyes and when looking for the differences between a 720p and a 1080p display at that range, there is hardly any differences (at least for me). plus, the battery life benefit with a 720p display is awesome.

please don't change the beloved 720p display for a less battery efficient 1080p display. or at least release another redmi 5 with a 720p display and the same specs as the original redmi 5.

for me, a 14nm processor is a must have in the redmi 5, otherwise im not buying it.

I suggest if the battery had the same power

CM3, 13 Jul 2017Really dude? It's a f*****g clock widget. Hardly samsungs i... moreThey look exactly like the S8's xiaomi cant do something original after all

Wow its 2017 and its July. Still using microusb and that wlan connection though. The design look nice btw. So sad with that

Anonymous, 13 Jul 2017Battery back up would be actually same if not better, with ... moreEver since the Lenovo P780 came out in 2013, all my succeeding phones since then have been at least 4000mAh. I sold the P780 and the buyer was very happy that it lasted more than a day despite heavy use. (It used to last 2 days or more with heavy use which was unheard of in a smartphone in 2013). In short, if you have non-removable battery and plan to still be able to use the phone or sell it after 4 years with no battery issues, 4000mAh is a good starting point.

Battery back up would be actually same if not better, with andoid 7 efficienty and 630 on 14nm. Bravo Xiaomi, well done

I always wanted a Redmi 4 Prime with 64GB internal memory since I need the dual SIM and my favorite offline encyclopedia app is 16GB in size leaving very little internal memory for other apps if the phone's internal memory were only 32GB. Settled for the Redmi 4X 64gb instead. Now there is the better Redmi 5. Everything is an upgrade except the smallish 3680mAh battery. I hope it's not yet final. Looking for at least the same battery capacity that made the Redmis popular among heavy users of camera, radio and youtube/video playback.

Wow very nice to see Redmi (number) to have impressive specs, at least better than Redmi 4 and 3 with Snap 625 and keep the iconic 5 inch affordable, ah already want it