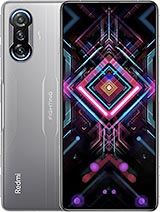 Abhi1136, 02 May 2021It was a sarcastic reply to the guy who was calling my prev... moreohh sry then felt like u really meant people don't charge there phone while gaming or type-c headphones r better.

Does it work in the UK the redmi k40

I cant buy cuz its punchole cancer but i wanted it

I will buy this phone as a normal user but not as gamer .
This is better than the previous k40/poco f3 with upgraded camera and optimized processor.
This phone is not meant for heavy gamer and i agree with that and
This is the best option for less than 400$ (for global ver).

rifty, 02 May 2021excuuuusse me princess not everybody is lite fps gamer that... moreIt was a sarcastic reply to the guy who was calling my previous comment irrelevant. I don't know what you're on about.

salarx, 02 May 2021Redmi K40 is a good phone, but not for gaming. Just like so... moreBut the starting price of this phone should be around 300$ especially in asian countries

Redmi K40 is a good phone, but not for gaming. Just like someone said here, adding gaming triggers doesn't make it a gaming phone. It has a ugly notch, which is acceptable when watching videos, but not when playing games. The jack is absent, and you cannot charge / passthrough power the phone when playing games. And the battery isn't even that large. It's a great gimmick for grabbing new customers, but someone already gaming in online competitives would pass on this one. The gaming performance of Dimensity 1200 still needs to be seen in prolonged usage. I can see why ROG 5 costs more, and why 'real' gamers are more inclined to buy it. It has features that no other gaming phone offers. Not everyone needs those features, but having the option of accessories and features is always good, and depending on where you are, ROG 5 ain't gonna be more expensive than this phone.

CptPower, 27 Apr 2021Oooooooh wow that pricing. Competitors are in trouble. Dimensity chipsets have always been cheaper than the Snapdragon equivalent, so no surprise with that pricing.

Crazy Pavel, 29 Apr 2021you started to get bored .. as long as with this 3.5 mm nob... moreLol, wireless Bluetooth headphone is crap, especially for gaming phones.

Abhi1136, 01 May 2021Yeah it's irrelevant, because nobody charges their pho... moreexcuuuusse me princess not everybody is lite fps gamer that they won't charge there phone. ever played heavy games like genshin impact on your phone do u know how much charge they take on high settings? the problem typc-c headphones that they don't come compatible with all phones especially cheaper ones! and sometimes the damn things screws up ur charging ports making ur phone unable to charge. people want headphone jack for reasons

Purdi, 02 May 2021Pop-ups weren't the right way. First of all, it gives ... morei dont think they are a hassle at all i have used op 7t pro and k20 pro. when a phone is not made to be water resistant they don't resist water! pop up or a notch! heck i casually used my oneplus 7t pro outdoor i dont think it was getting any more water inside then my other notched phones. company's can make water resistant pop up if they like!. how do u think they are making speaker's,button's and port's while being water resistant? and this notch phone is costing way more than its previous pop up generation which was 400$-450$! if u see the price its the reverse instead of costing less it's a 200$ increase. so why would say pop up is a costly part when the previous pop up phones are more value for money??? it might save some dollars not having it for the manufacturer but really what are we gaining as customers? it saves the phone from that asymmetrical look by also providing uninterrupted full view screen which is totally worth the little cost.. pop up's are more secure becuz the camera goes inside the phone so its invulnerable to display scratches or tearing! unlike notches and dubious apps wont be able use ur camera to spy since it goes inside and u will notice if it pop's up with out your usage thts why its more secure and private

Did this hp will get pubg global version 90fps later? Did any1 know? Bcuz dmensity 1000+ still not yet updated 90fps right? Any1 got info on dimensity 1000+?

rifty, 01 May 2021its sucks that this phone has a punch hole while being such... morePop-ups weren't the right way. First of all, it gives water another way to enter. Secondly, it would cost more to manufacture the parts and it would take up more space. Finally, pop-ups are somewhat of a hassle.

MasEnha, 01 May 2021It should coming with usb-to-3.5mm connector as of Poco F3,... moreYeah it's irrelevant, because nobody charges their phone while gaming/listening to music or watching videos and dumb Asus still brought it back in the ROG5 even though it has 2 type C ports.

Does the K40 Gaming Supports MHL ? - HDMI Display over USB Typ C ? When not its not a Gaming Phone...

Abhi1136, 01 May 2021just adding gaming triggers doesn't make it a gaming p... moreIt should coming with usb-to-3.5mm connector as of Poco F3, hence your comment is irrevant. Furthermore, there are already USB headphones out there designed for gamers.

its sucks that this phone has a punch hole while being such a capable gaming phone . i dont get what happend to redmi k series there series used have pop up before which is better and more secure and wasn't facing any issues so why redmi why? just give it back!!