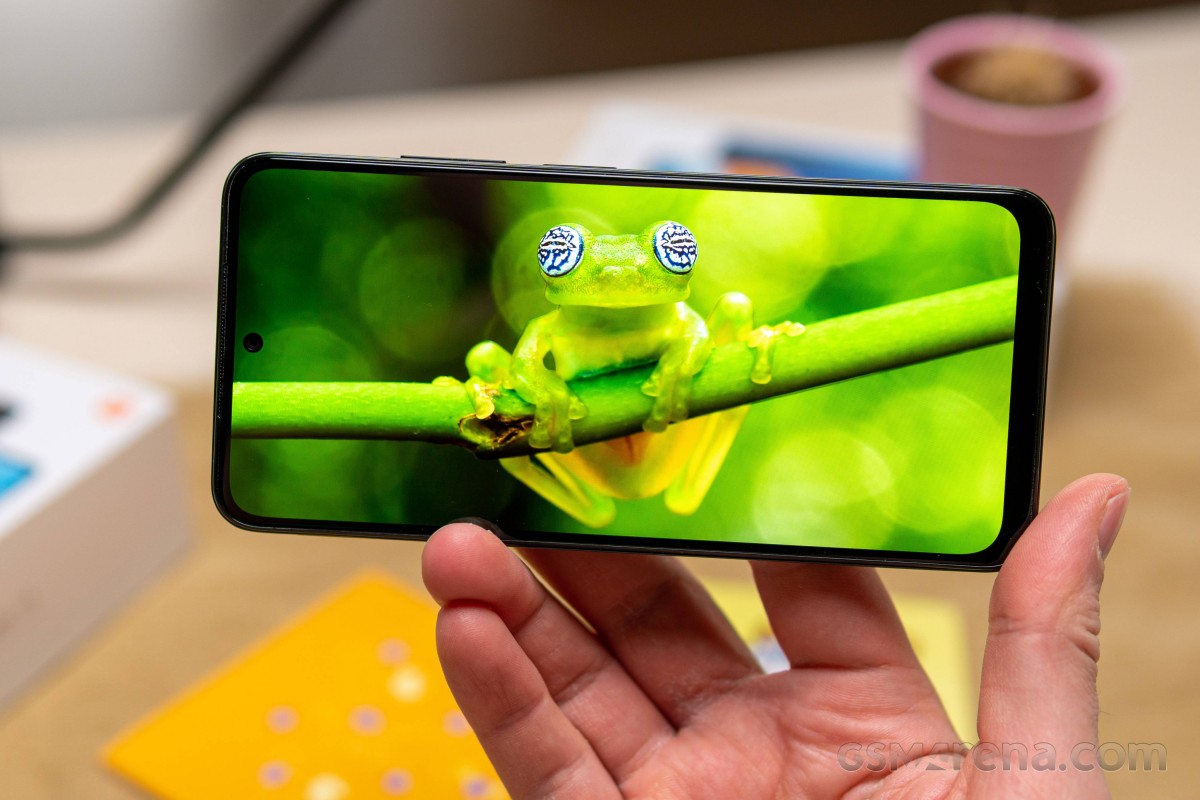 Maxing out the manual brightness slider on the Redmi Note 11 results in a slightly lower 465 nits of max brightness compared to its predecessor, but in practical terms, the difference is indiscernible.

The Redmi Note 11 has excellent brightness and contrast for a budget device. While it can't quite compete with modern flagship OLED panels, its display still gets bright enough to be perfectly usable outdoors.

There is a new option within the brightness settings menu called Sunlight mode, which is only available while auto-brightness is disabled. Despite what its name and crude description suggest, it does not "unlock" some hidden extra brightness the display is capable of. Instead, it is meant to be used in conjunction with a manual brightness setting and still allow the display to boost brightness in bright light when needed.

The Redmi Note 11 has a total of three color modes - Vivid, Saturated and Standard. The first two aim for the DCI-P3 color space and don't bother too much with color accuracy, instead prioritizing "OLED pop". Both modes produce similar colors, with Saturated offering slightly higher max brightness and, like the name suggests, slightly more saturated colors. Both modes are tuned a bit cold out of the box but can be adjusted and warmed up through the included custom white point control.

Custom white point for warming up vivid and saturated modes

If color accuracy is what you are after and you don't mind living with a "duller" palette, then Standard mode is the way to go. It basically nails sRGB color accuracy with deltaE results low enough to be considered color-accurate.

While still on the topic of colors, the Redmi Note 11 does not advertise any HDR support. That is to say that its display is not deemed or certified to show HDR content for one reason or another. The phone and its Snapdragon 680 chipset still offer and report HDR 10 and HLG decoding support on a software level. That means you can technically play HDR, but the colors will be tone-mapped to "SDR" before being displayed.

The Redmi Note 11 has the full Widevine L1 DRM certification, which is great to see. That means that it can stream at HD and higher resolutions from platforms like Netflix. The latter happily offers FullHD streams to fully saturate the native resolution of the phone's display.

The Redmi Note 11 comes with two refresh rate modes - 90Hz and 60Hz and for the most part, these act like "strict toggles". 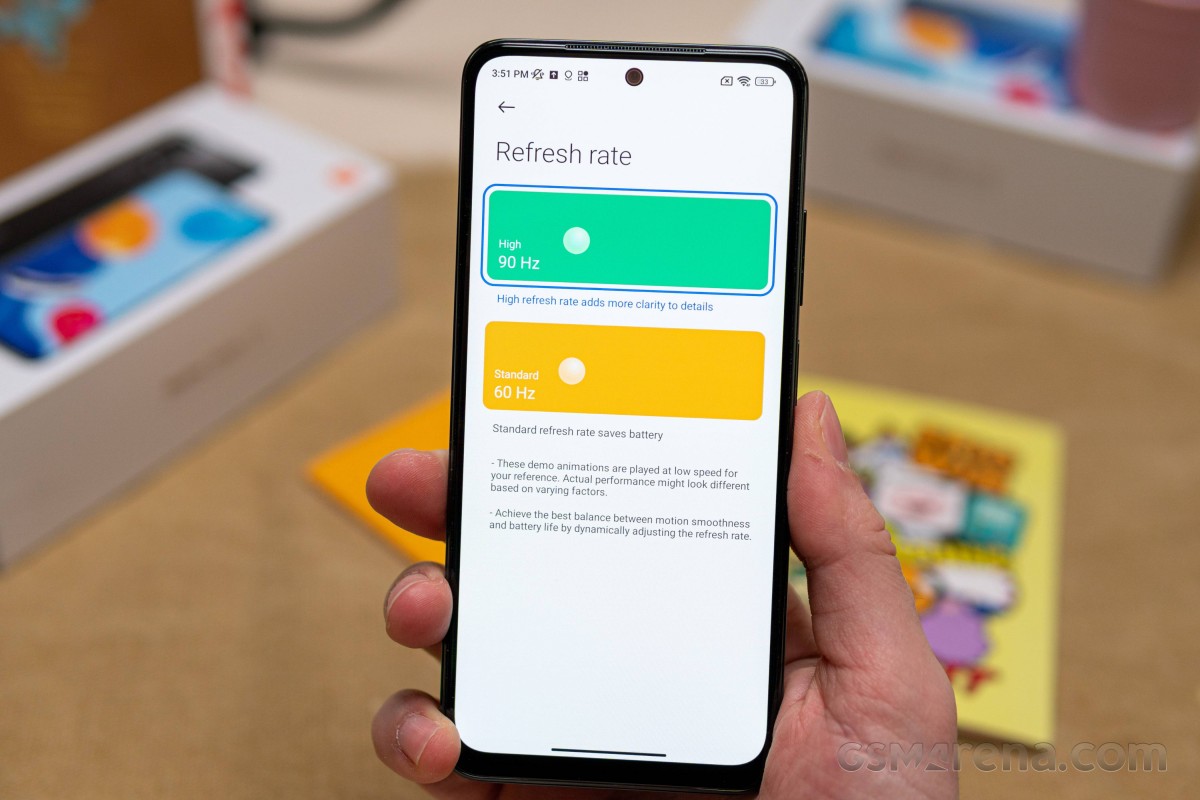 Enabling 90Hz basically makes the phone run at 90Hz nearly all of the time. There is still some automatic switching logic in place, but for the most part, the refresh rate is basically locked, which is not necessarily a bad thing. Going by past experience, the battery draw difference between 60Hz and 90Hz is pretty minuscule on a modern panel. Having things set up in this straightforward way avoids some annoying edge cases that frequently arise with complicated automatic refresh rate switching.

As we said, there is still some automatic logic at play in 90Hz mode. For the most part, the main UI and most apps just run at 90Hz.

UI and apps running at 90Hz

However, if you leave a static image on screen for long enough, the Redmi Note 11 does, on occasion, briefly, drop down to 60Hz. The refresh rate naturally shoots back up to 90Hz once you touch the phone, but that's not the only thing that triggers the jump back with it happening on its own as well. In practice, the phone still spends the majority of its time refreshing at 90Hz.

Briefly dropping down to 60Hz while displaying a static image

Videos playback is probably the most important automatic refresh rate trigger that is implemented and works reasonably consistently on the Redmi Note 11. Once the OS detects that you are playing back a video, be it local or otherwise, it generally drops its refresh rate to 60Hz, as it should, to conserve power.

Some apps like YouTube tend to run at 60Hz altogether, which is fine in our books. But, the logic is not perfect since Netflix was stuck at 90Hz regardless of whether we were browsing the UI or actually playing content. Again, the practical difference to battery life shouldn't be major, so we won't complain too much about this particular irregularity.

What we would love to see addressed by Xiaomi is the fact that Google Chrome - the default pre-installed browser is always stuck at 60Hz. That's a bummer since browsing can generally benefit from the smoother 90Hz scrolling and animations. At least both Firefox and the Samsung Internet browser we tried off of the Google Play Store didn't have this issue and ran at 90Hz with 90fps rendering.

While on the topic of third-party apps, we already mentioned that Netflix always runs at 90Hz. The same goes for Facebook and Instagram. Whereas TikTok is stuck at 60Hz.

Gaming in 90Hz mode is a bit of a mixed bag on the Redmi Note 11. We tried a few games we know can run at higher than 60Hz and 60fps, and most did, in fact, make proper use of the refresh rate and even managed to render at over 60fps on the relatively modest GPU of the Redmi Note 11. Others like Dead Trigger 2 were stuck at 60Hz. But then again, that's not a bad thing in this particular case, since according to the nifty FPS counter within Xiaomi's GAMETURBO, the Redmi Note 11 doesn't have the horsepower to even render Dead Trigger at 60fps, let alone above that.

All things considered, the Redmi Note 11 does a relatively good job of managing its 90Hz high refresh rate mode. There are still some kinks to iron out here and there, but nothing that is particularly "game-breaking", disappointing or battery wasteful is present at this time.

The Redmi Note 11 comes with a big 5,000 mAh battery. The Snapdragon 680 4G might not be overly impressive in terms of performance, but at least it makes up some ground in terms of battery efficiency, likely thanks to its modern and efficient 6nm manufacturing process. Plus, the X11 LTE modem, while not particularly fast, doesn't waste too much power either. 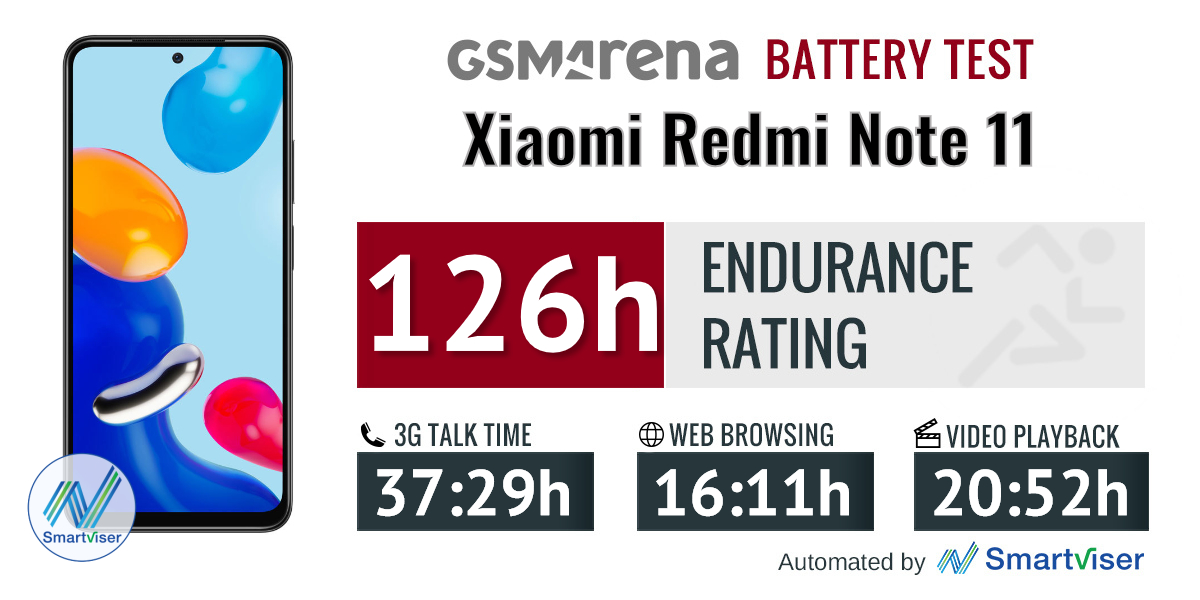 The Redmi Note 11 has all-around great battery life, scoring 126 hours of total endurance rating. Its standby and call numbers are particularly impressive. The same goes for on-screen video playback. The Redmi Note 11 is an excellent multimedia consumption machine. Web testing numbers are still plenty impressive but also the least consistent of the bunch.

While we haven't tested another Snapdragon 680 device yet for comparison, the Xiaomi Redmi Note 11 Pro 5G and the Realme 9 Pro are both based on the similar-enough Snapdragon 695 5G chipset and manage similarly-impressive battery numbers.

The Redmi Note 11 ships with one of Xiaomi's 33W chargers. We've seen those being bundled before, but charging speed from them has admittedly been a bit inconsistent across devices. Xiaomi claims the Redmi Note 11 can charge up fully in an hour. 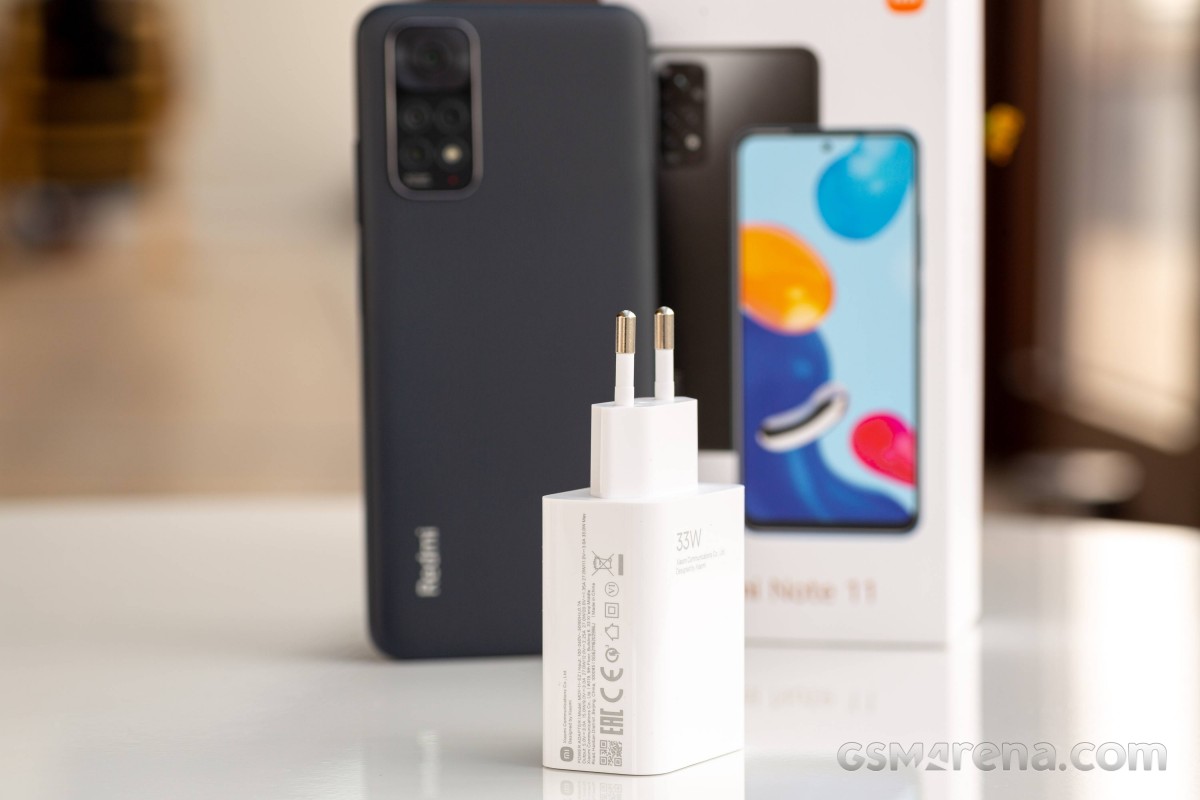 Speaking of the Xiaomi 33W charger, it can output at 5V@3A, 9V@3A, 12V@2.25A and 20V@1.35A. This all sounds suspiciously like Power Delivery, but that can't be the case since the charger itself has a female USB Type-A connector. Plus, the charger also has an odd 11V@3A output, which does not strictly fall under the PD spec either and is actually how it does its max 33W output. Hence, Xiaomi is probably using something akin to Quick Charge for its charging.

That being said, the Redmi Note 11 also advertises support for both Qualcomm Quick Charge 3+ (an oddly old spec) and Power Delivery. We tried topping off the phone with a powerful 65W PD charger with PPS for the sake of thoroughness and got notably slower charging numbers. Plus, the phone never actually reported a full charge, but remained "trickling" at 100% for over half an hour until we unplugged it.

The Redmi Note 11 has a "Dual Stereo Speakers" setup. At least, that's what Xiaomi advertises on its website. That's a bit ambiguous, though, since it kind of implies there are two symmetrical, full-sized speakers on board. All of the signs actually point towards a hybrid stereo speaker on the Redmi Note 10 and the Redmi Note 10s, though.

While we can't point to an official source for that, teardown videos of the phone back that theory up. The top speaker frill is also milled to different depths down its length, which could be an indicator that not all of its length is actually used.

Regardless of the actual hardware setup, though, we are pleased with how well the speakers perform. They are well balanced and get pretty loud, scoring a Very Good rating in our test, with a virtually identical score to the Redmi Note 11 Pro 5G. Audio quality appears to be improved over the Redmi Note 10 generation as well, with clearer and richer mids and better-defined lows.

There is an automatic Dolby Atmos enhancement across various media apps like Gallery, Mi Video, YouTube, and whatnot, so you can expect an even better sound experience within those.

Thanks for sharing the truth.

The quality of video calling much depends on your network strength and dedicated speed rather than selfie camera. Check video call quality on other platform like telegram or facebook massenger the ask expert for help.

Hey! I'm facing the same issue, the what's app video call quality is so worse. I bought this once this phone got released. Really disappointed with the WA video call quality, it really makes me look like I've put some filter and so blu...