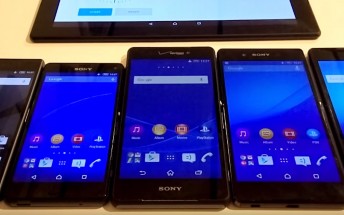 It's probably a full year now that the Snapdragon 810 is mentioned in every article with the word "overheating" thrown in somewhere. And since the Sony Xperia Z5 Compact is powered by one such Qualcomm chip, it was natural that it would entertain mini-flagship enthusiasts how it would fare in resource-intense tasks such as 4K recording, thermally speaking that is.

Well, an Xperia fan (or the Xperia Fan) has taken to it and put a bunch of smartphones to the test, side by side. The participants are the Z5 Compact, Z3 Compact, Verizon-exclusive Z3v, Z3+ and M5.

A level playing field is achieved by placing all of them in airplane mode with no background apps running. Upon engaging the 4K mode all phones greet you with a customary Sony warning that the phone will overheat and the camera will switch off. The big question is when and the video aims to answer that.

The Xperia Z3v calls it quits first, short of 11 minutes. The Z3+ pops up the overheating warning around the 15min mark, but interestingly it's the Z3 Compact that throws in the towel second, without a warning, around 17 minutes into it.

It was a close call between the camera used to record the test and the Z3+, but the Z3+ narrowly beat it (or is it the other way around) and gave up in under 21 minutes. Then the Xperia M5 ran out of storage, so it's result is inconclusive. It could, however, be argued that if it doesn't overheat while you have room to record it's doing a fine job.

Which brings us to the Z5 Compact. The warning comes at the half-hour mark, but is perhaps overly conservative, as it takes another 10 minutes, before the heat gets too much to bear - 40 minutes and 15.5GB of 4K video are the end result.

Sony Xperia 10 II gets priced in the UK, will be available on June 15

i dont think that's true about the S6 not having an overheating issue: https://www.youtube.com/watch?v=HlnlW6sOP7w i think only the iphone 6s/6s plus don't suffer from overheating issues in 4k as much as any android.

Forever? There's a limit. Are u talking about ordinary or 4K recording? You've to appreciate Sony for trying to solve the heating problem. Use the new SD810 and then please comment. I can understand brand loyalty,but please don't criticise blindly. E...