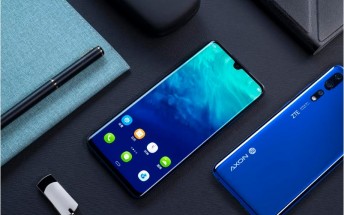 ZTE's Axon 10 Pro has been one of the most underrated 'flagship killers' of the year, when it comes to simply looking at the specs on offer and taking into account the affordable price as well. That said, it hasn't been as successful, sales-wise, as some of its competitors.

Still, ZTE hasn't forgotten about the Axon 10 Pro and today it's started rolling out the update to Android 10 for the phone. It comes with ZTE's own MiFavor 10 skin on top, which the company officially introduced to the world in late November.

Aside from the big new features this and Android 10 itself bring, you also get a bunch of smaller enhancements here and there - whether we're talking automatic call rejection by Game assistant, optimized Smart screen home, the ability to invoke your voice assistant with the power button, group ringtones, optimized blacklist, added face recognition to the private space function, or the new system optimization engine called Z-Booster 2.0 with AI. Hit the Source link for the entire changelog.

The update is currently available in China. Hopefully it will make its way to more countries soon.

Not only about pricing. This also includes other factors like which ports and other hardware they put in phones.

When you put front of P30 Pro, Mi Note 10 and Axon 10 Pro together, can you still find any different?