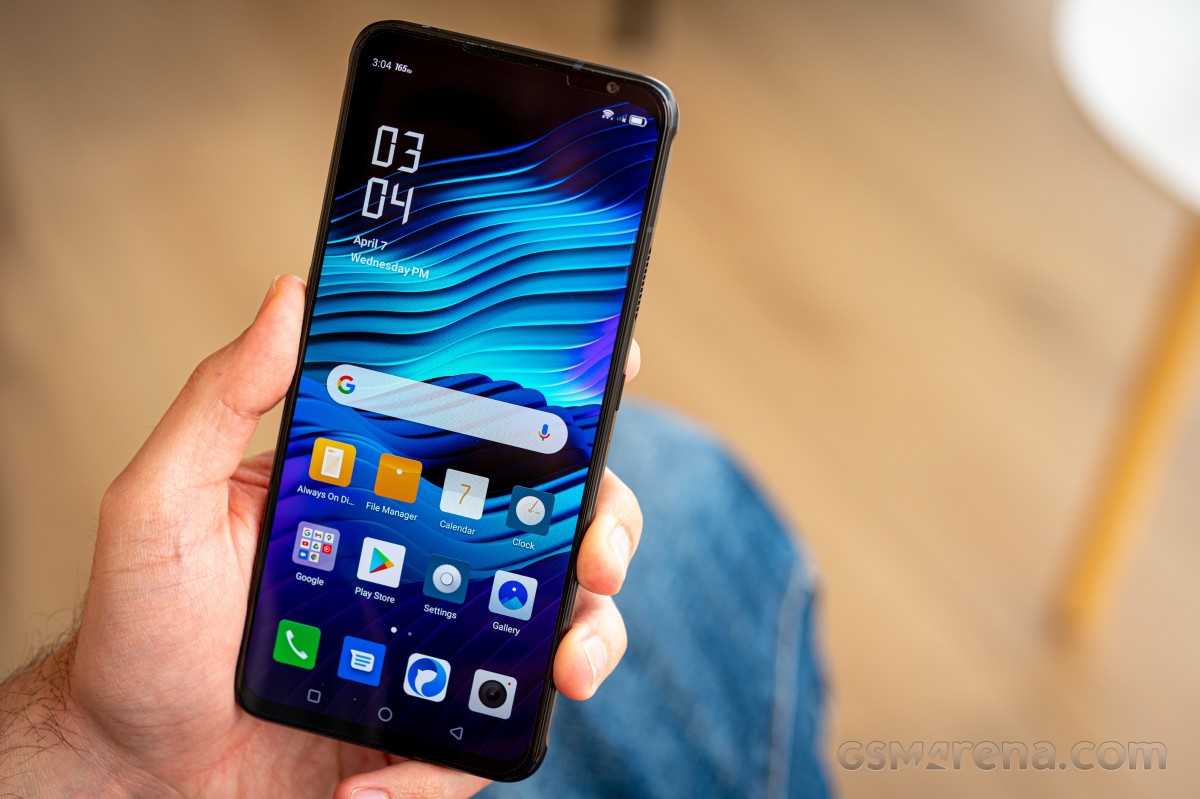 Another thing we noticed right off the bat is the unwieldy nature of the handset. It's not only big with a 6.8-inch screen, it's also super slippery. The back has an oval shape and the glass surface doesn't help with the grip either. Using the phone with one hand is a struggle. And yet, the dimensions of the Red Magic 6 don't deviate too much from the Red Magic 5S', even with a bigger screen. In fact, the Red Magic 6 is narrower and slimmer (in both cases less than a millimeter but still) while carrying a bigger display. 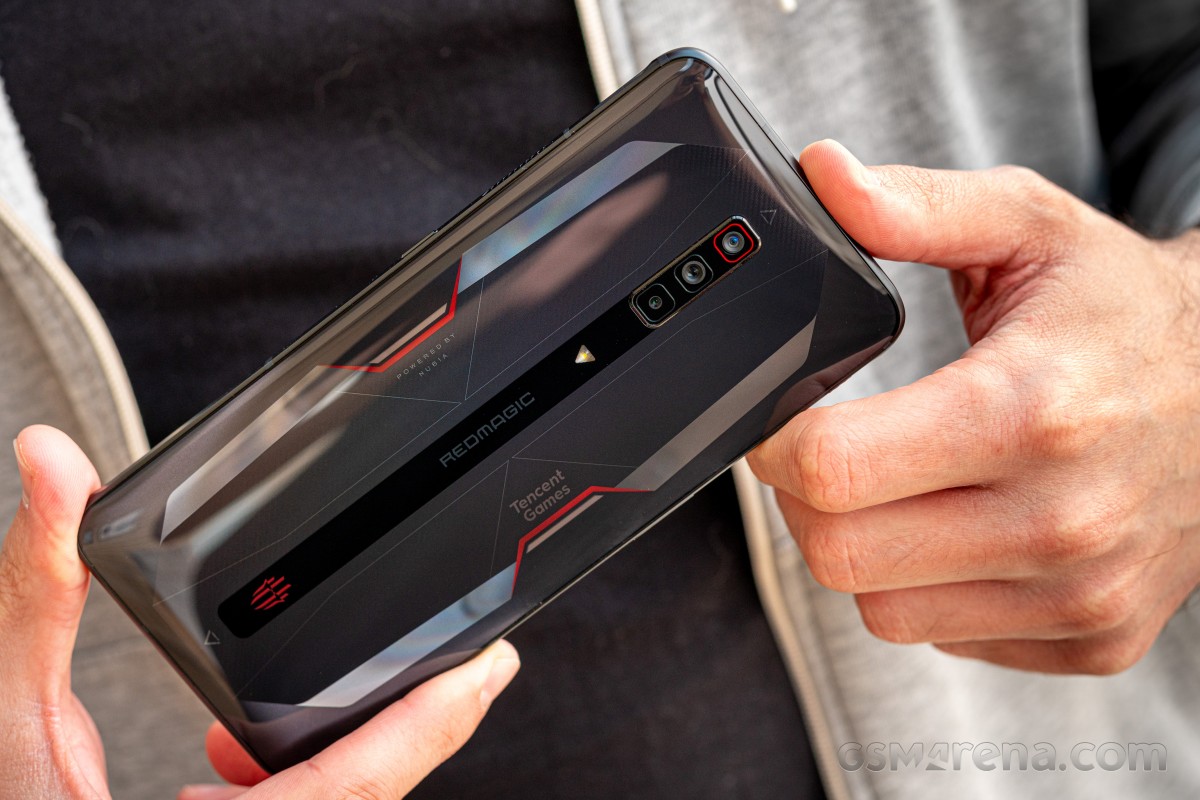 Speaking of, the front won't surprise you with the smallest bezels around, and there's a good reason for that. Just like the previous designs of the series, this one leaves enough headroom for a comfortable grip in horizontal orientation. The slightly thicker top and bottom bezels help reduce accidental touches during gameplay. And the top bezel is big enough to house the earpiece doubling as a second loudspeaker. The usual sensors for ambient light, proximity and the front-facing camera are nearby. 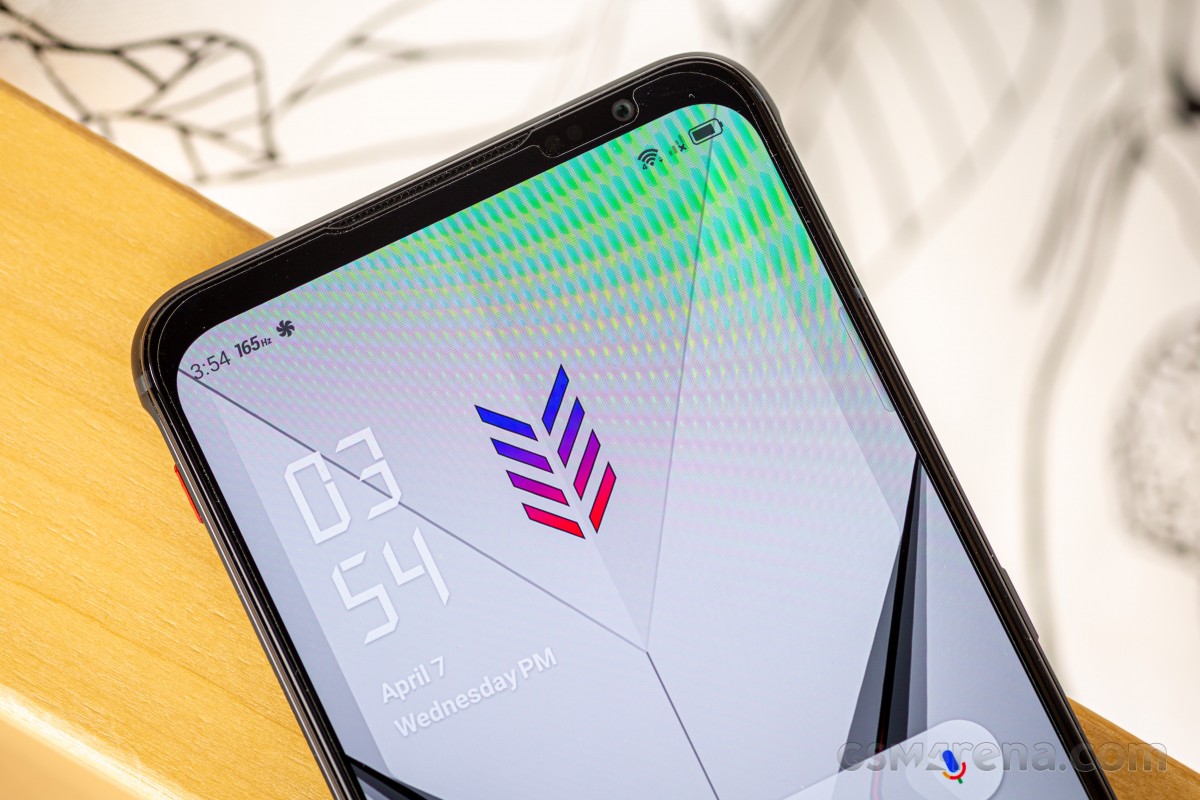 The fact that the display doesn't have any cutouts and has flat edges will surely get some positive attention.

Not much has changed in terms of aesthetics too. The patterns on the back are once again designed with gamers in mind. We got the Eclipse Black color that seems to be a good fingerprint magnet. Since we got the Chinese version of the phone, there's "Tencent Games" written right next to one of the LED strips. The global version doesn't have the Tencent logo. Still, "Powered by nubia" can be found on both variants next to the other LED strip. As before, the Red Magic logo at the bottom can light up, but it can only do it in red. Only the two (rather discreet LED strips) offer the full RGB spectrum. 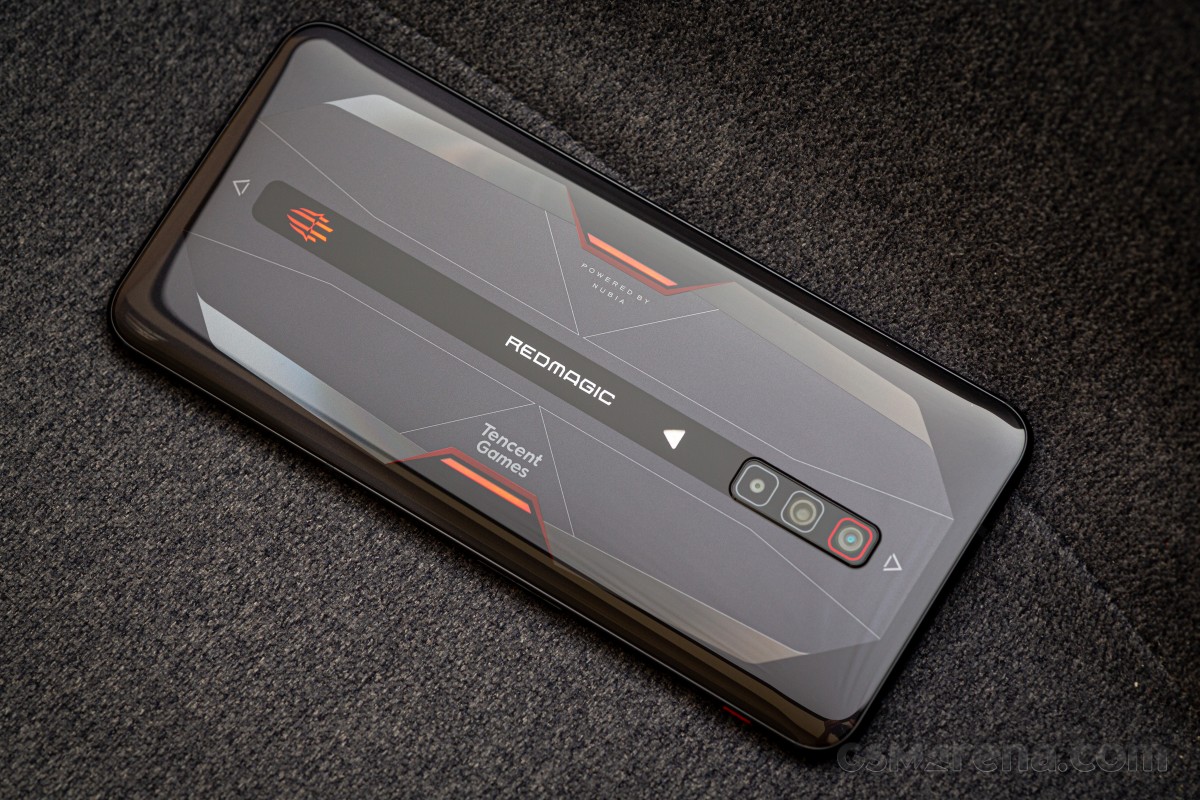 The camera island is rather minimal, and it protrudes ever so slightly. It hasn't changed its position, but it's now rectangular-shaped rather than a triangle-like element. The LED flash is embedded behind the glass panel right below the camera bump.

Since this is a gaming phone, there are quite a few elements of interest along the frame of anodized aluminum.

At the bottom, we see the SIM card tray, which has only two SIM card slots and no room for a microSD. The bottom-facing speaker grille, main microphone and the USB-C connector are adjacent. The interesting bit is that the top and bottom parts of the frame are concaved. The top only has the 3.5mm audio jack and the noise-canceling microphone.

The iconic red, patterned hardware switch to launch the Game Space software remains on the left with the intake vent for the cooling fan next to it. The volume rocker is also on the left, leaving the right side equipped with the power button, another noise-canceling microphone, the exhaust vent and the two shoulder triggers. 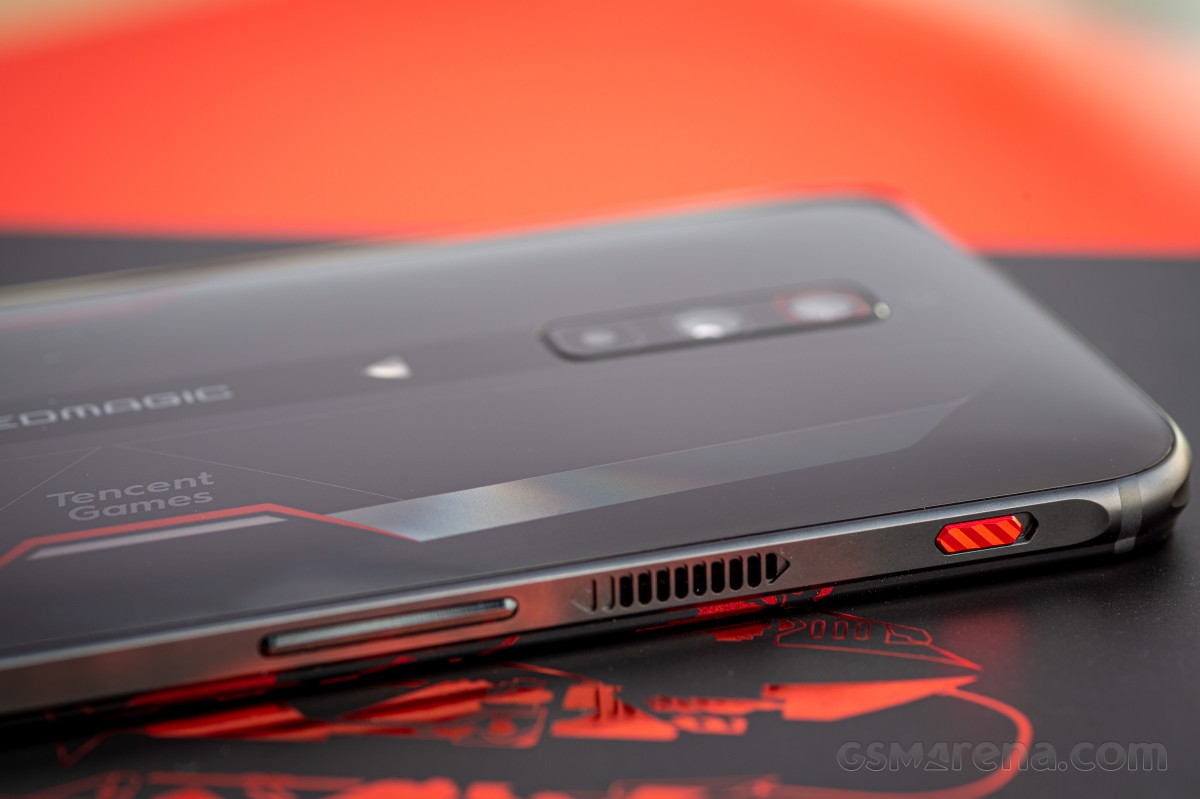 Since the shoulder triggers themselves lay flush with the flattened frame, the slightly rounded corners provide the tactile feedback, so you'd know where to place your fingers while playing. All buttons are well-positioned and are within reach without the need for finger gymnastics. Moreover, the intake and exhaust vents don't get in the way when holding the phone either horizontally or vertically. 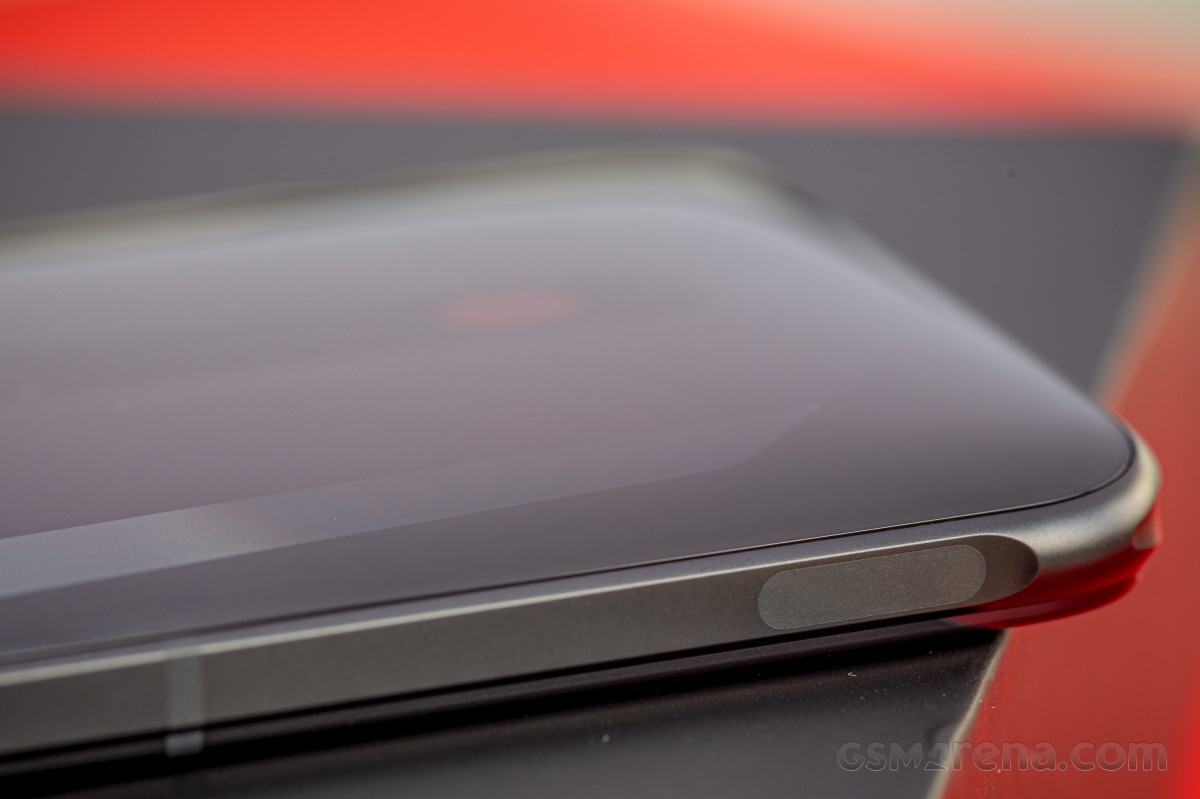 Even though the Red Magic 6 doesn't offer a complete overhaul of the design, it's a small step up from the previous generation in terms of ergonomics only due to the fact that it offers a bigger display in the same footprint as its predecessor. Still, the 6 is one big and slippery phone, and with all that hardware and cooling components, it's no surprise that it weighs a hefty 220g. 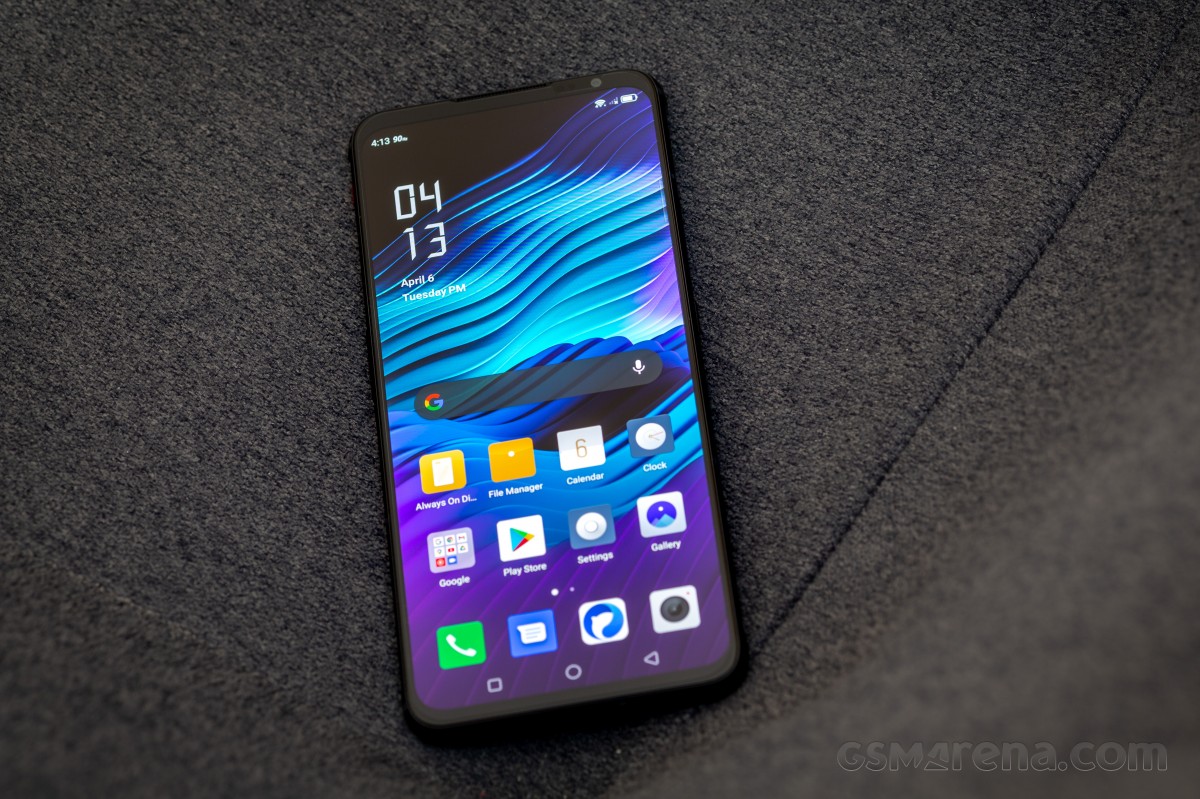 I like this phone, everything work perfectly except the WiFi.Can't connect to public wifi, just connected but no internet, I tried to forget the network but it still doesn't work. who are experiencing the same issue. Pls help.