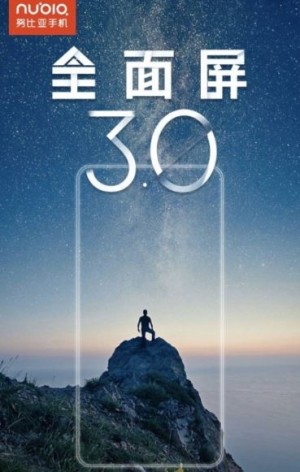 ZTE’s subsidiary nubia has its own solution for border-less phones, introduced back in 2015 with the launch of the nubia Z9. The tech followed through all the way to nubia Z17s with 18:9 screen, but now the company is bringing something new, according to a post on the company's Weibo page.

The image says simply “Full-Screen 3.0”, suggesting that a new borderless device is already on its way. Sources tell the selfie camera will be placed on top of the screen, in the middle, probably similar to the Essential PH-1.

If these hold water, this will mean nubia has decided to follow its competitors and jump on the notch train.

Although we are yet to see any official info on an upcoming device, it is most likely to be the nubia Z18 flagship. The predecessors Z17 and Z11 were launched in June, so the forthcoming phone should follow suit.

ZTE Nubia Z18 mini first sale is done, next one is on April 25

Nubia Z17 was an excellent phone but poor software support and no global rom made it useless - Z18 if follows the same path would suck too. I'd love a Z17 right now with QC4.0+ support but with rom issues/patched "international" roms etc? nah

Thanks for the info it really help me Best mobile

this time for sure , Nubia is having something unique in its mind . It says full screen 3.0 , meaningfully it may call the galaxy "infinity display" and apple "notch" be full screen 1 and 2 respectively, so having a new view towards display formatio...