Back in February, we first caught a glimpse of the Alcatel Idol 4s at MWC 2016. In keeping with the Alcatel tradition, it was piled together with another basic Idol 4 model, as well as three other POP4 devices. Still, even amid the announcement chaos that this event is known for, the Idol 4s still managed to stick out of the bunch. Now, the phone is officially on sale in North America and we couldn't miss the opportunity to take a closer look at what appears to be the highest spec'd Alcatel handset yet. 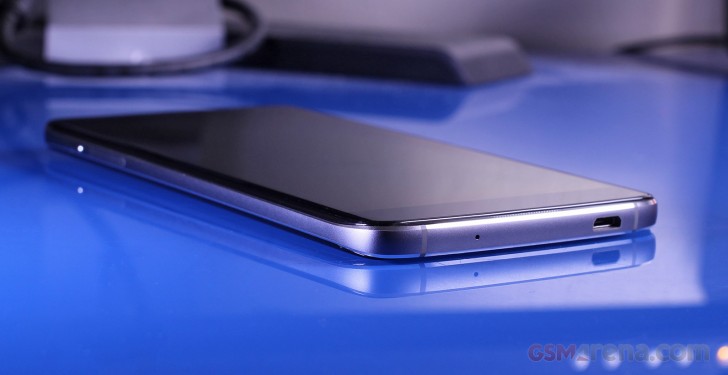 Alcatel doesn't usually dip its feet into flagship waters, but the once formidable mobile titan has found its own way of surviving all this time on the 'dog-eat-dog' market. For the most part, this has entailed catering to carrier needs and the Chinese phone maker has been throwing out a slew of entry-level to mid-range handsets hoping for something to stick.

Every once in a while, however, amid the endless sea of Pixi and Pop devices with all their carrier-specific varieties, Alcatel still manages to come up with something impressive while maintaining on affordability.

Alcatel Idol 4s at a glance:

Now, we know this point is definitely open for debate, but we feel pretty confident in calling the Idol 4s a 'flagship offer'. The AMOLED display with QHD resolution is about as good on paper as most other 2016 high-end offers. As far as we are concerned, 3GB of RAM is still perfectly fine and although the Qualcomm SoC in question might be from the 600 series, ample power is available thanks to four Cortex-A72 and four Cortex-A53 cores. The camera setup looks just as promising in terms of raw specs as well.

However, the Alcatel Idol 4s is priced quite unlike a flagship - at the tantalizing $399 (even $350 on pre-order). It boils down to how well the Idol 4s actually performs everyday, outside the dry specs.

LOOKIng for the old Alcatel phone calls only and messages. About 4years old

It's two different phones judging by pictures in your review and by specs in specifications. One has got a fingerprint and the other one hasn't got it.

My goodness.Amazing that Alcatel has made a risk to go so far beyond a average midrange class!!!Something newly must have happened in Alcatel!!Hopefully,gsmArena had gone to cons or disadvantages too!!!A good news anyway!!....Justice Rights....