After yet another popular generation of Moto X and Moto G , Lenovo seems to have every intention to keep the lineups going for even better financial results and possibly even substantial profits in 2016. This is evident by a fresh set of photos that depict early prototypes of some of the company's future devices and judging by the design language, they are most definitely from the Moto family.

Despite some easy to spot similarities, the alleged Moto X and Moto G for 2016 look quite different from their current generations. This goes especially for the former, which according to the report will now have a slimmer metal body. The shots appear to confirm this, although it is difficult to get a clear view of the device. 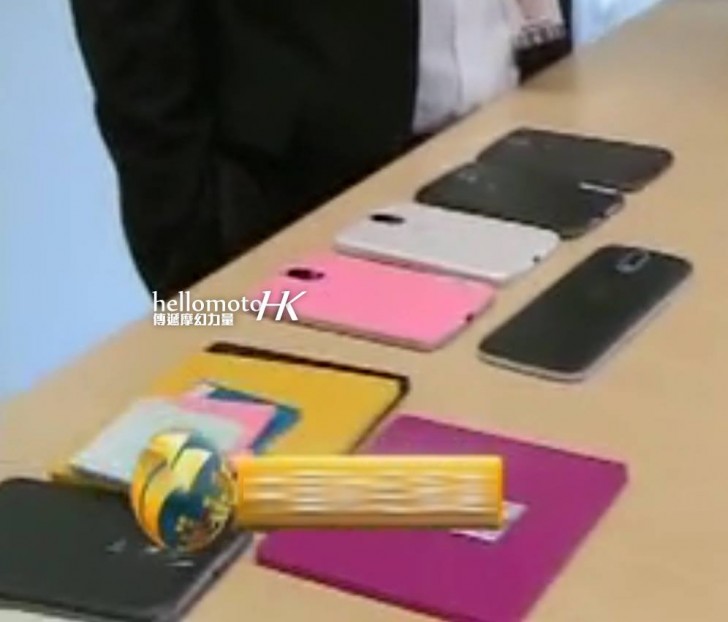 Still, one thing is unmistakably present – the signature "M" logo on the back. Seeing it is rather encouraging in light of the recent confusion that arouse from Lenovo's announcement that it will be phasing out the Motorola brand on smartphones. Luckily, the issues was later cleared up and it appears Lenovo will go through with its much more sensible plan to simply shift focus towards the more "contemporary" Moto brand.

Back to the shots at hand. The second batch of more colorful units are said to be the new Moto G and the resemblance to the current gen is a lot more apparent this time around. The signature camera module with the Moto dimple is there and so are the curves on the top and bottom of the device. Also, the swatch of back panels in a variety of colors falls in line with the customizability you would expect from the G series.

One small new detail to note is that it would appear the Lenovo logo is now present on the bottom of the back plate as was to be expected.

Motorola Edge 20 Pro in for review

There will be a "premium" Moto phone in 4th quarter, just like the last two years. Don't be a sucker and buy one of these. We're getting somewhere, but we haven't finished the journey yet. _________ In 2014, all we had worth considering...

Exactly. And moto x pure was not on hype before release. When it released, BOOM. Good price to quality combo. And no special disadvantages plus stockish ROM. Every brand should make stick android ROM with only small tweaks.