The latest Samsung Galaxy S10 leak is reportedly an official render of the Galaxy S10+ (the largest variant). It is in line with other CAD renders weve previously seen down to the placement of the front camera and a triple camera system in the back - that is, if you count the first render, the one that had three cameras and not four.

The calendar date on a render is normally something significant and seeing how the event is going to take place on February 20, we might speculate that March 8 could be when the phone becomes available for sale. 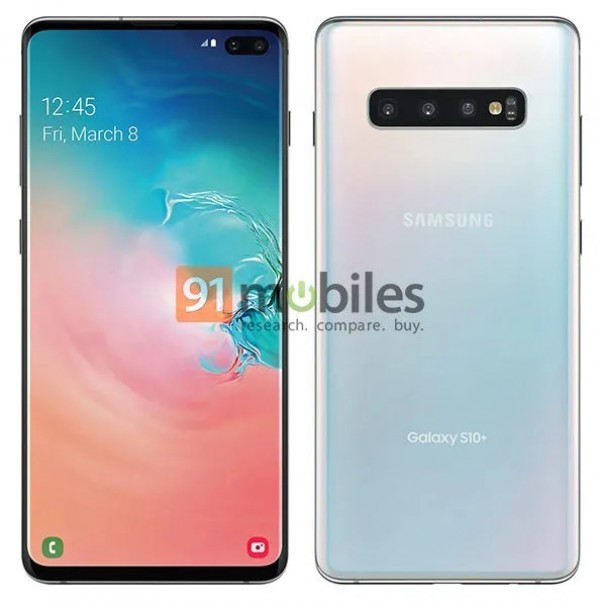 Here we can see the phones front-facing dual camera, placed in a cutout of the display. We wonder what extra features this second camera will unlock  we hope its a wide-angle selfie camera. We can also see the display has notably smaller bezels than the Galaxy S9+ which should equate to a higher screen-to-body ratio. We presume this display will be an AMOLED panel, likely with a QHD+ resolution.

The back of the phone is some kind of white pearl color option with faint red and blue hues. There is also a triple camera setup next to an LED flash and heart-rate monitor that Samsungs been using on its flagships since the Galaxy S5. Just below the camera, there would normally be a fingerprint scanner but the rumors is that Samsung has an ultrasonic reader embedded in the display in both the S10+ and S10.

On the topic of biometrics, it doesnt look like this design would be able to support an Iris scanner for biometric authentication. Samsung is likely phasing this out starting with the Galaxy S10 - I personally dont find the Iris scanner to work consistently or reliably for myself.

The Galaxy S10 will be fully announced at an Unpacked event on February 20. There are three variants rumored to be announced: one 5.8-inch, one 6.1-inch, and the S10+ has a 6.4-inch display. Powering the S10 will be either a Qualcomm Snapdragon 855 or an Exynos 9820 chipset, depending on the market.

Why not just have the top bezel same size as bottom and incorporate the cameras in there... Whats the point of still having a top bezel (albeit smaller) and then camera cutouts separate. This would have been acceptable if they had no top bezel.

"alleged" and "official" are hard to put in the same sentence.

I don't understand mobile company designers. They could ask me. Instead of double holes, single holes, notches, they could easily come up with rotate out selfie camera, that no need to come in middle of display. It is also possible to just use ...