The Amazfit GTR 2 has a Classic edition, as well as a Sport Edition. The two share the same physical design and proportions. Both also have the same hardware and the exact same 1.39-inch AMOLED display.

The GTR 2 Sports Edition, which is the one we have for review, is made of aluminum alloy and tips the scale at 31.5 grams, while its Classic sibling is crafted out of stainless steel and is slightly heavier at 39 grams.

Beyond the main watch body, the two versions also ship with different straps - a sweat-proof silicon one for the Sport Edition and a leather one for the Classic. 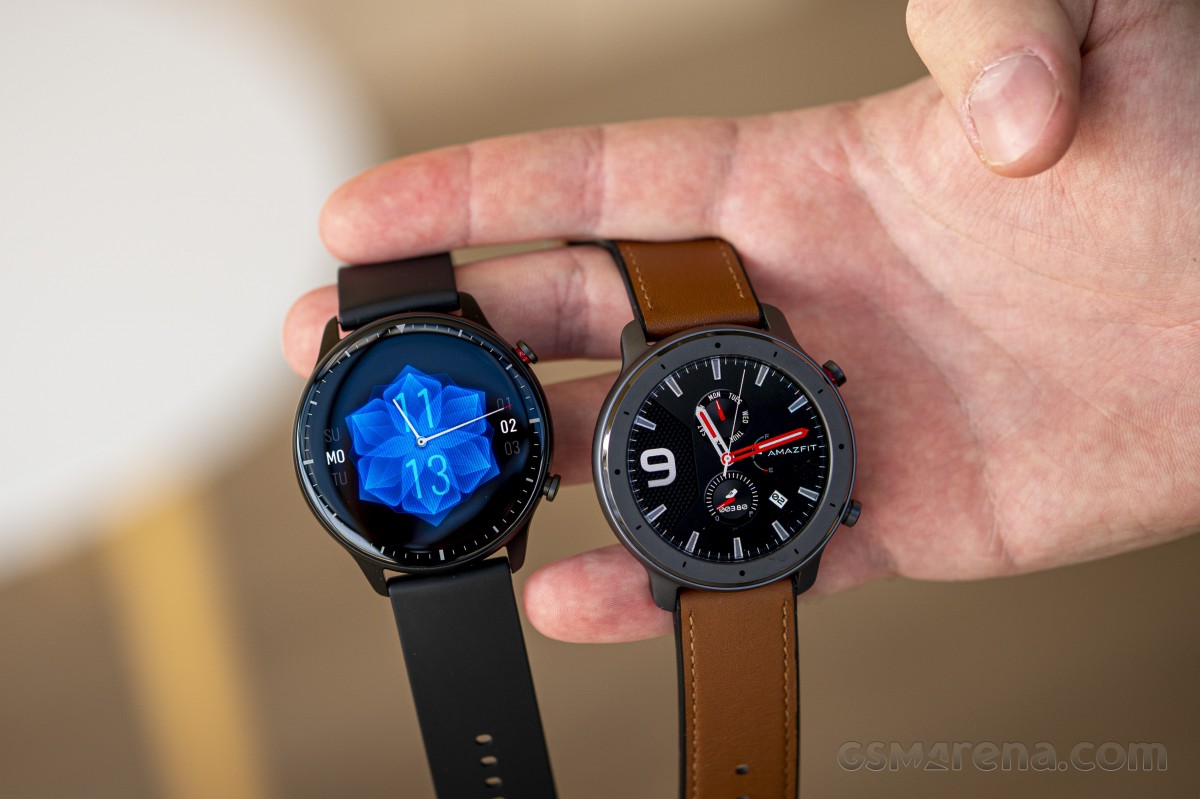 The "sweat-proof obsidian black silicone strap" on our review unit invokes mixed feelings. As far as silicon straps go, it is alright. Soft enough to be comfortable and elastic enough to instill durability confidence.

The clasp is a bit on the cheap side and appears to be plastic instead of the metal one w have on the old GTR. Perhaps that's just for the Sport edition. Plus, it feels sturdy enough, and we appreciated the plentiful punch-holes and their tight spacing on the other side. 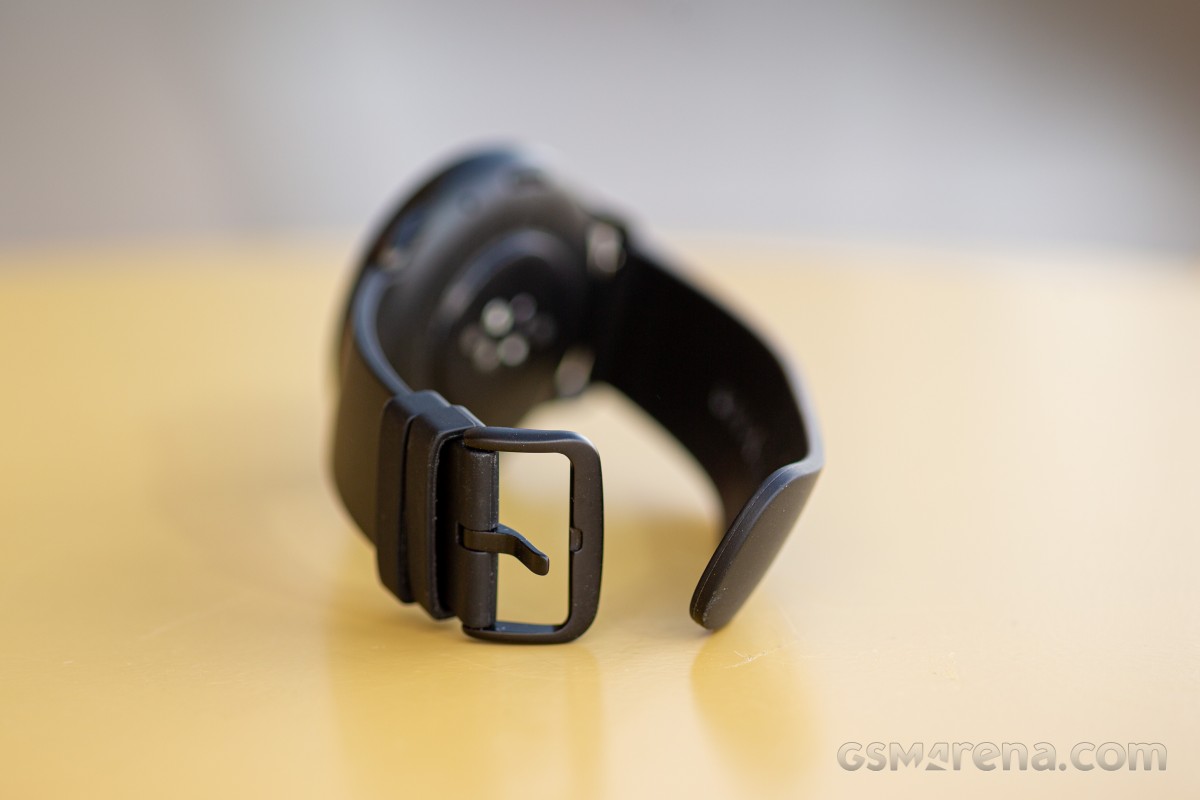 We had no issues with the fit of the GTR 2 from a small female hand to the fairly-beefy male one you can see in the lifestyle photos. Plus, if you really don't like the factory band, it uses a standard 22mm attachment mechanism, making it really easy to pick up a third-party replacement of your choosing. On the plastic back, we find the familiar elevated portion, housing Huami's trademarked PPG BioTracker. The sensor itself is version 2.0 and has an extra visible part compared to the one on the original GTR and the T-Rex. Cutting through some of the marketing talk here, like the trademarked OxygenBeats tech, the new hardware seems to bring blood oxygen measurement (SpO2) to the table, as well as automatic workout detection. Though the latter might just be a software improvement rather than a hardware one. 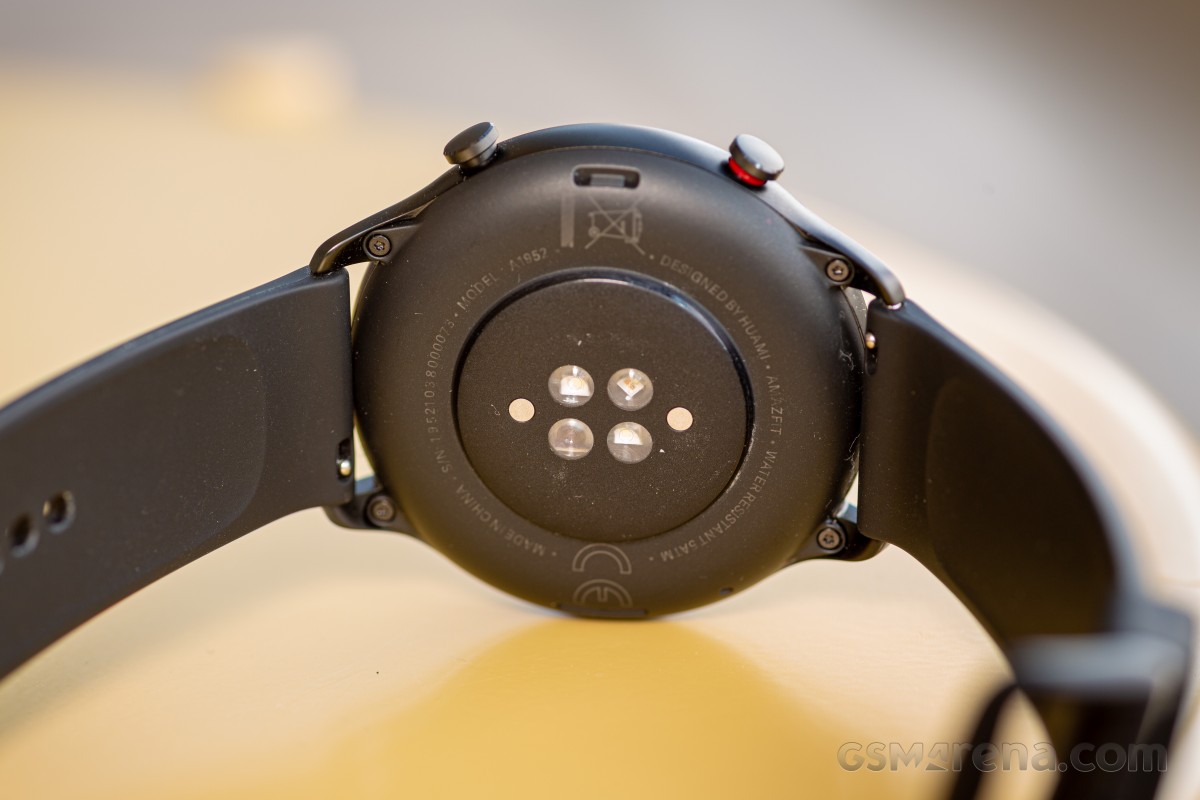 Looking at the backs of the original GTR and the new one side by side quickly reveals two other major hardware additions to the second generation. The holes on either side of the device are there to accommodate the new speaker and microphone. The bigger one on the left is the speaker.

The integration of a loudspeaker a mic has allowed the watch to be used for taking calls via Bluetooth. The other purpose of this hardware is voice commands. For the time being, these just offer simple voice navigation for the watch itself, but Amazfit has promised Amazon Alexa support in an upcoming update. You can also get actual sound alerts for things like notifications or calls via the speaker and even play music through it. The latter is really nothing more than a gimmick, though, since it is a very tiny speaker.

The GTR 2 is water-resistant enough to track your swimming (in fresh water). Naturally, you can expect some issues with the microphone and speaker shortly after exposure. And, as always, saltwater is a definite no-go. 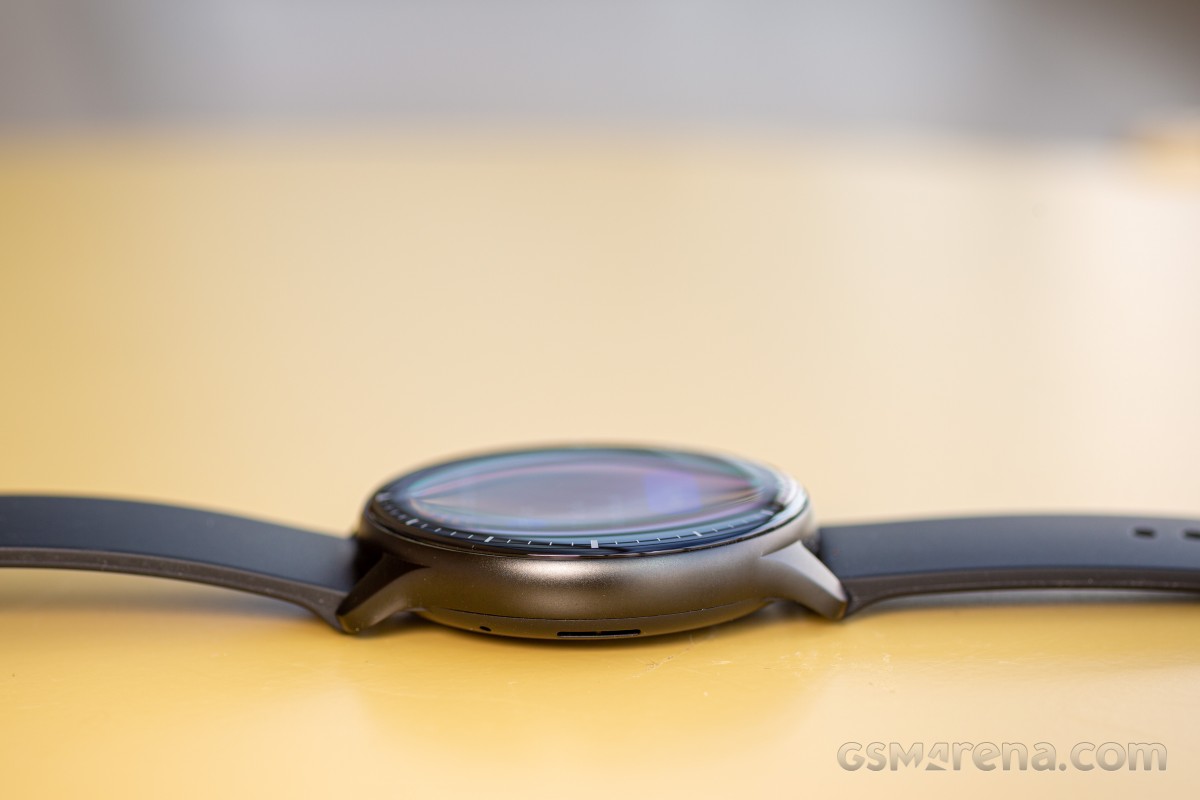 The topmost layer of the GTR 2's construction is what really sets it apart from the original GTR. Where that one had a solid metal frame and a recessed inner display, the GTR goes for an arguably slicker 3D curved glass design, spilling on to the sides of the wearable. This approach definitely has both its positives and negatives over the original and will inevitably be a polarizing aspect of the GTR 2. 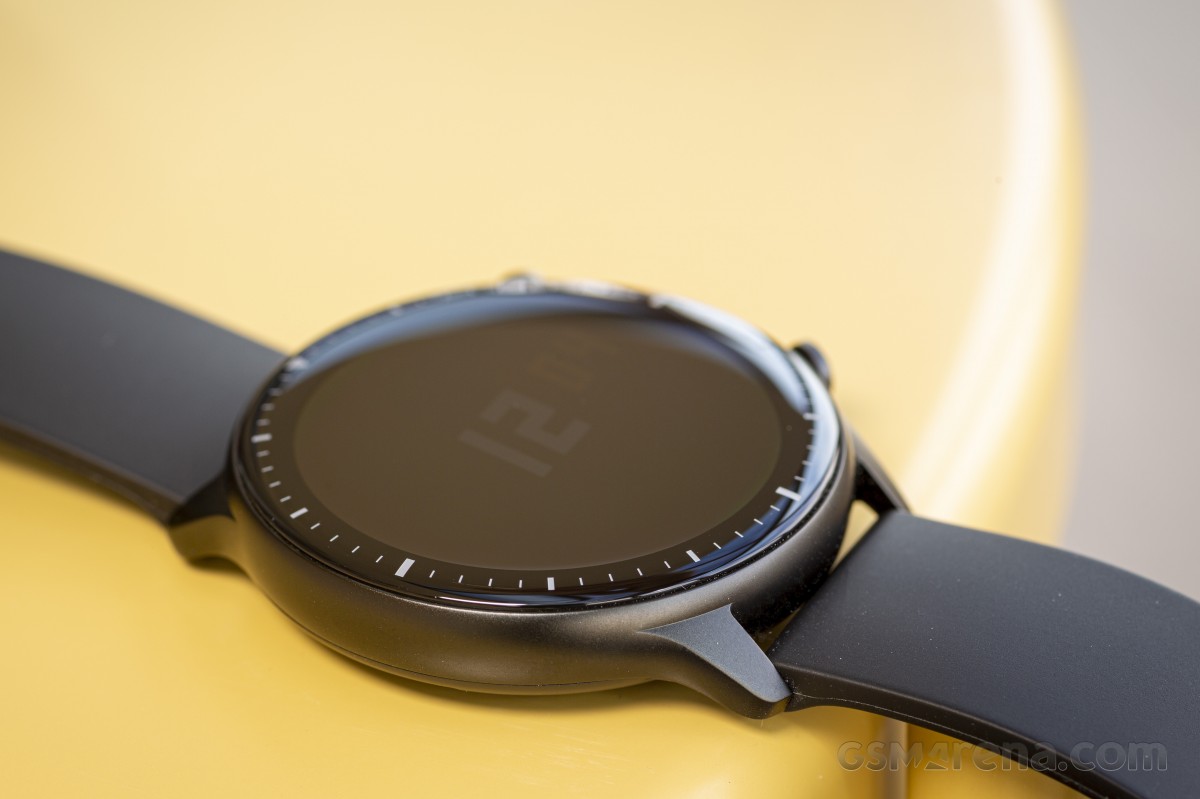 As far as the positives go, the display on the GTR 2 looks notably bigger than the one on the original GTR, even though both have the exact same 1.39-inch diameter. In fact, Huami could be reusing the same panel. The display on the new GTR 2 just feels "closer" to the user due to the new glass design, enhancing its appearance. And when the AMOLED panel is off or has mostly black showing on the sides, it blends in really well with the black outer bezel.

As for the downsides of this new design - a clear one is the painted-on dial on top of the glass edges. It looks tacky, almost like a sticker and once you see it for what it is, you start to really wish it wasn't there, since it kind of takes away from the otherwise very premium look of the GTR 2. 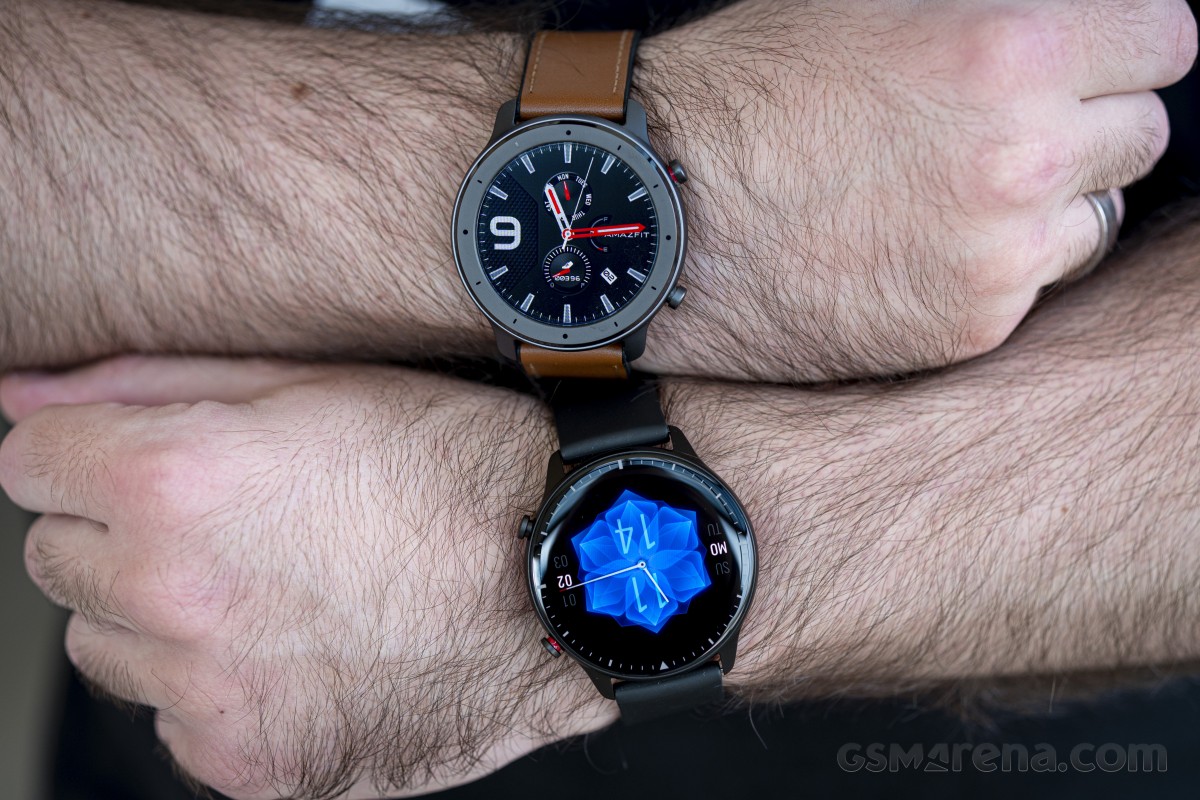 Huami claims the top glass is made of 3D Corning Gorilla Glass, with an anti-fingerprint coating and optical "Diamond-like Carbon (oDLC) coating". Those are a lot of fancy words but hardly something to keep the watch safe from accidental bumps and scratches. Here's hoping.

When it comes to wearing the GTR 2, our Sports edition watch with its 31.5 grams feels really, really light. Lighter still than the original aluminum GTR, we keep harkening back to for comparison, which sits at 36 grams and right around the weight of the Amazfit Bip S Lite. For even more reference, the latest Samsung Galaxy Watch 3 is anywhere from 43 grams to 54 grams and the Apple Watch Series 6 starts at 39 grams, moves up to 47 grams for the 44mm version, with a slightly lower weight range for the aluminum version. In other words, the GTR 2 is relatively light, and due to its moderate height of only 10.7mm, it is also very comfortable to wear while sleeping.

One final comfort point worth making here concerns the newfound ability of the GTR 2 to rotate its UI 180 degrees. This works nicely in combination with its rather symmetrical body for both left-handed and right-handed use.