The Amazfit GTR 2 comes with a 1.39-inch AMOLED unit, with 454 x 454 pixels and a very sharp 326ppi. These points match the display on the original Amazfit GTR, which did lead us to entertain the possibility that the two share the same panel. 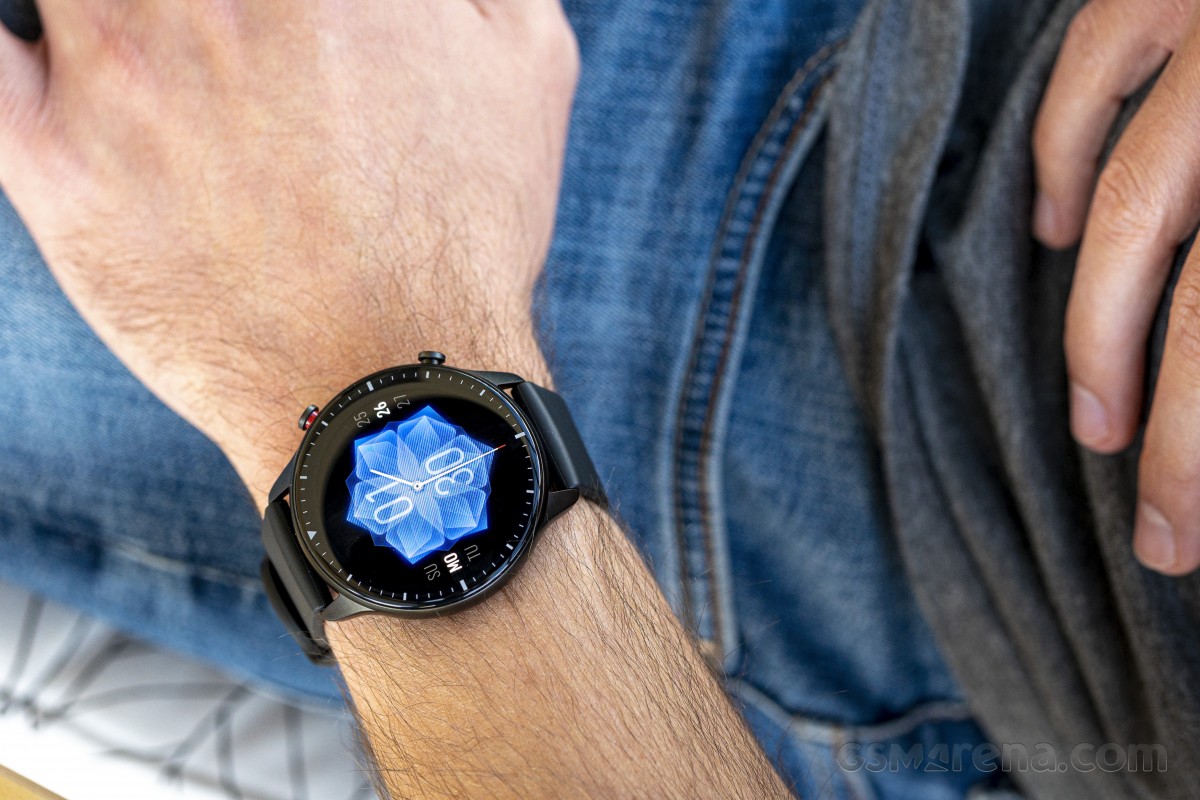 Huami claims 450 nits of peak brightness. OLED tech means perfect blacks, allowing the panel to seamlessly blend in with the black bezel. Some of the watch faces look like they are almost "floating above" the glass front. A premium look, for sure.

It is worth noting that the UI on the GTR 2 is different and better polished than the one found on the original Amazfit GTR. One of the most notable changes is smaller icons, menus, and text, which allows for more content to fit on the screen, but harms legibility, especially if you don't have 20/20 eyesight.

For the most part, the GTR 2 has a very similar control scheme to its predecessor. The 3D curved glass design of the GTR 2 definitely makes swiping gestures easier and more natural than they are on the original GTR, with its recessed display. There is no bezel to abruptly stop your motion. 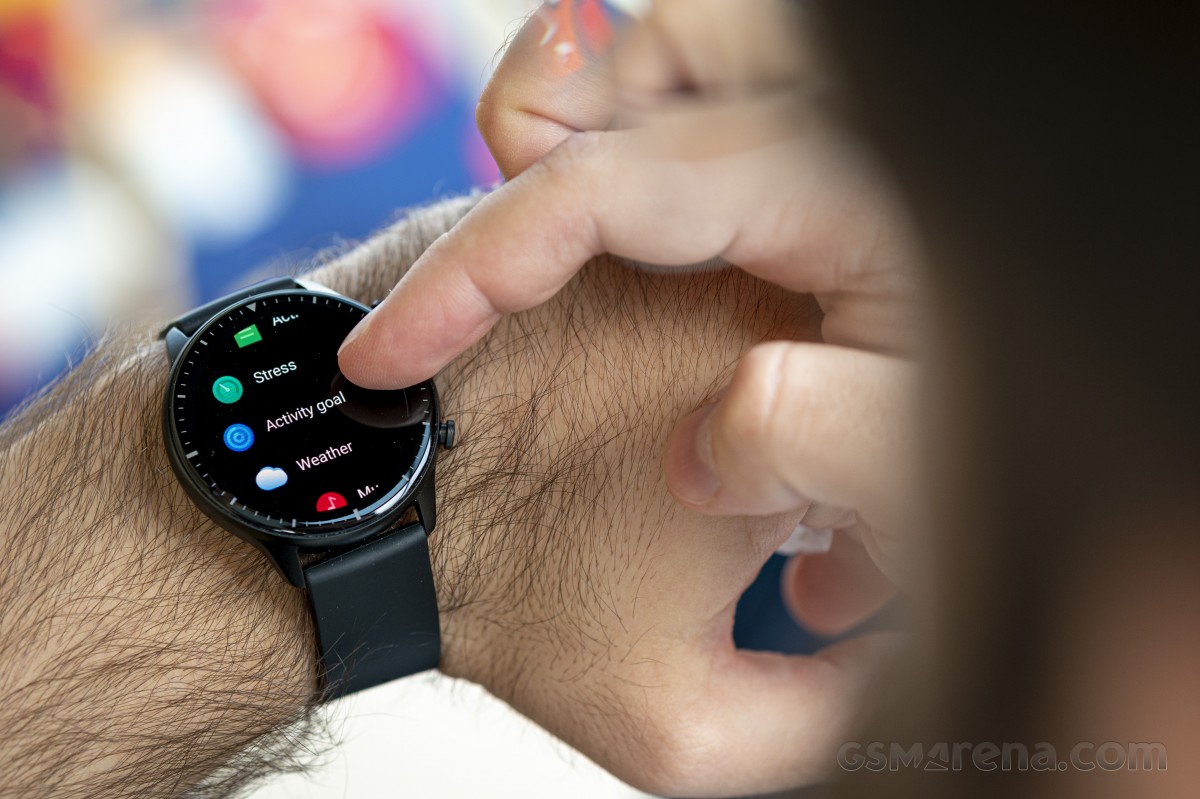 The physical buttons on the watch's side offer plenty of travel with satisfying tactile feedback. Don't expect to pull-off too much with the buttons alone. The top button takes you back to the watch face from anywhere in the UI. Once there, it switches functions and brings up the app drawer.

It's worth noting that Bluetooth remains the primary connection means with the GTR 2. Wi-Fi is a new addition to the GTR 2, but it's meant to allow you to upgrade your GTR 2 faster and transfer music to it. There is no Wi-Fi menu in the watch UI or the companion app at all.

Transferring a song to the GTR 2's internal memory brings up a prompt informing you that a Wi-Fi connection with the watch will be established, which will temporarily interrupt any other Wi-Fi connections you might have, which leads us to believe the watch is only capable of establishing Wi-Fi Direct connections to the smartphone. You can't connect to a Wi-Fi access point as you might expect from a device with Wi-Fi capabilities.

Out of the box, the watch itself has a total of 8 pre-installed watch faces. Some of these even feature additional customization of individual complications.

By default, to save energy the screen turns off and you are not using the watch and it only lights up when you lift your hand to check the time. However, even at its most sensitive setting, it's nowhere near the responsiveness of the proper smartwatches.

In the past, if you found that delay annoying, you had to select one out of the two available always-on watch dials - which didn't necessarily match your selected watch face.

Whereas now each watch face on the GTR 2 can include a custom always-on version. Over 40 of the watch faces in the official Amazfit store in the Zepp app already have this functionality.

Speaking of the Zepp app, this is how you download new watch faces. And unlike before, you now don't have any limitation in the number of watch faces you can download on the watch before you are required to delete a few to free up slots.

We are still not huge fans of the companion app's UI that Amazfit offers. Visually, it's fine, with plenty of slick graphics, especially when it comes to statistical plotting and charting. However, despite the re-branding, the app didn't really go through much internal organizational change, and it still feels chaotic and overwhelming.

The overall layout is confusing. Some features are only accessible through one very specific menu, while others are inexplicably multiplied on several spots throughout the UI.

Getting notification from your phone to show up on the watch is also a fairly involved process with just basic guidance in the form of a text file. We think that in this day and age, an app like Zepp should be able to request the needed system permissions on its own, only leaving the user the task of allowing them. 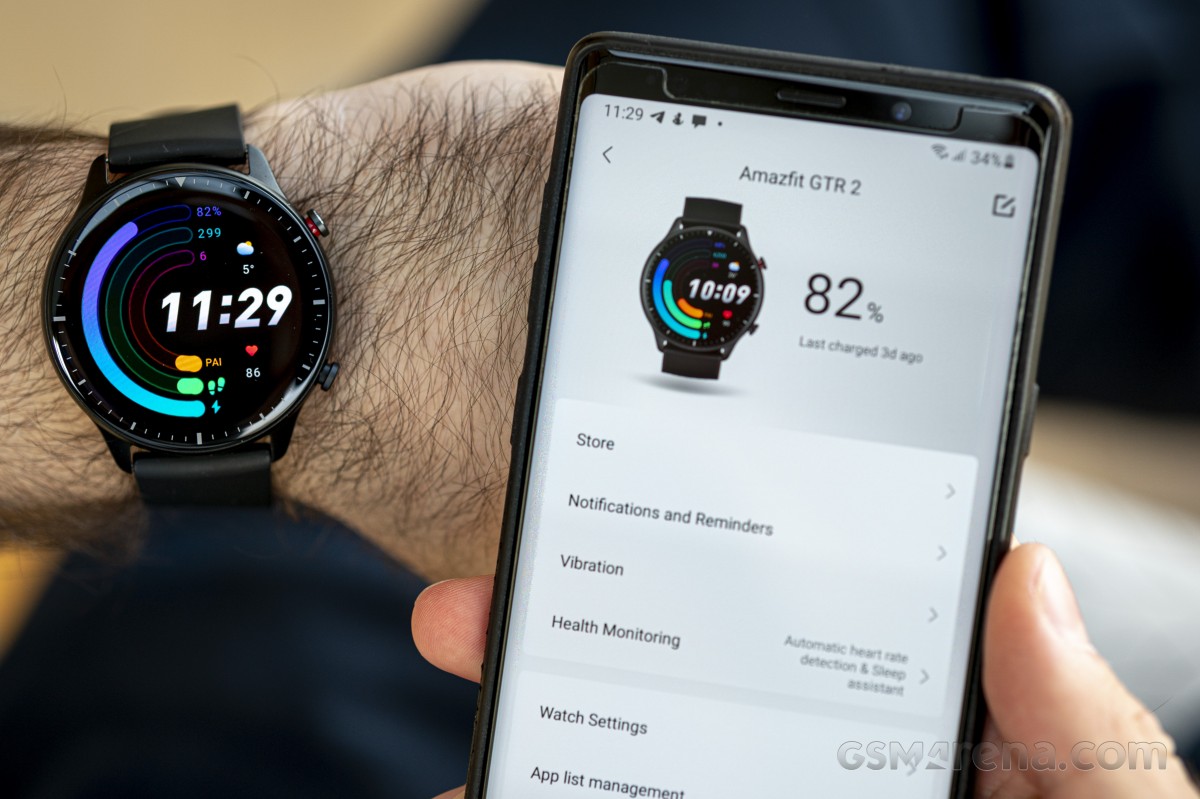 The app has its positive sides, too. For instance, you can link the Zepp app to several other third-party apps and services, like Google Fit, Strava, Relive, and WeChat. We tried the Google Fit integration and were pleasantly surprised since it works both ways - the data already on Google's servers ended up in the appropriate locations inside the Zepp app, and the data from the GTR 2, as well as historical records from this reviewer's old Amazfit GTR appeared in Google Fit.

The Amazfit GTR 2 is powered by a 471mAh lithium-ion battery. Tiny, in smartphone terms, but still bigger than both the original GTR at (410mAh) and the more-recent Amazfit T-Rex (390mAh). Taking the comparison a bit further, the new GTR 2 has an advertised endurance of 14 days on a single charge - a few less than the T-Rex at 20 days and notably less than the original GTR, however, marketed at 24 days on a charge.

This disparity between battery capacity and endurance should be attributed to the extra hardware inside the new GTR 2. We have a suspicion that the extra-smoothness and fancy nature of the entire UI and its animations are an indicator of a beefier chipset and the GTR 2's core.

The promised 14 days still sound great, but they are not representative of the real-world use you will get out of the device. The combination of features you choose to enable on the GTR 2, the frequency with which you do measurements with it, use its display, Bluetooth, or making calls - they all add up and put a dent in the total battery endurance.

To quote Amazfit's documentation, that 14-day estimate is for the following usage pattern:

The way we used the watch involved wearing it around the clock with heart-rate monitoring once every 10 minutes, between 10 and 20 wrist-raises and display wakeups a day, around 30 minutes of total GPS activity per week, and a lot of push notifications - around 300 per day. No blood oxygen measurements.

With this type of use, we got around 10 days out of the GTR 2 on a single charge, with 5% of battery still left in it at the end. Of course, your own mileage will vary.

For comparison, out of the box, the original Amazfit GTR used to do the advertised 24 days with roughly the same usage pattern. Now, a year or so later, it can do around 18 to 20 days.

Both watches offer something called Basic Watch mode. Enabling it puts them in a very low-power state with limited functionality - time and date, step counter, and basic sleep duration tracking. The GTR 2 should last up to 38 days in basic mode on a single charge.

As for charging, the advertised 2.5 hours of charge time for the GTR 2 are about what we experienced. The charging bit does not come with any information regarding voltage/current requirements, so we usually used a regular USB port. A faster charger yielded the same charging time.