Android 7.0 beta rollout for Huawei Maimang 5 and G9 Plus begins

Huawei has started rolling out the Nougat beta update to its Maimang 5 smartphone as well as its global counterpart the G9 Plus. Arriving as build number B330, the update is currently only hitting units running B150 or B159 builds. 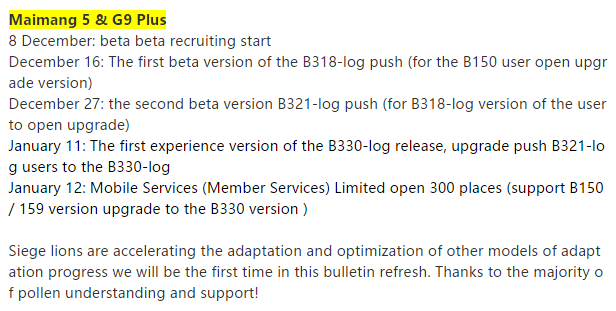 Also, not everyone will be getting the update yet - it'll be hitting select 300 units in the first phase.

In case you missed, the Chinese company shared its Nougat roll out plans in December beginning. While the firm had said that the roll-out will begin in Q1 2017, the Mate 8 and P9 have already received the update ahead of the schedule in China.

A Nougat beta program for the Honor 5C was also recently launched.

when will we taste the Nougat OS on our p9?

When Nova plus will get nougat update?

Huawei is to slow i regret buying p9+ its flug ship phone and until now running Android 6.0 To slow to slow