The upcoming iPhone 14 series is expected to be divided into two camps – the Pro models will get the new Apple A16 chipset, better cameras and a different screen setup. The vanilla models will stick with the current A15 chip, 12MP cameras and a notched display.

The current iPhone 13 series already exhibits a small division in terms of performance – the vanilla phones have 4-core GPUs, the Pros have 5-core GPUs. Also, the vanilla models have 4GB of RAM, while the Pros get 6GB (both LPDDR4X).

The iPhone 14 and 14 Max are expected to get the 5-core GPU version of the A15 chipset, plus more RAM – 6GB of LPDDR4X – so they will have an advantage over the current models. 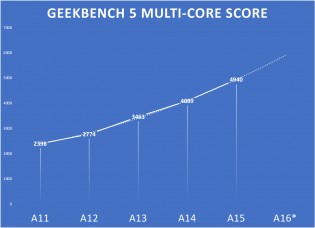 But how fast will the iPhone 14 Pro and 14 Pro Max be? Macworld attempts to tackle this question. The first thing to note is that the new A16 chips will be fabbed on TSMC’s N4P node, an iterative improvement over the N5P node used for the A15, but not a full generational jump.

The new A16 chip is expected to be larger – 18-20 billion transistors, up from 15 billion. The company might also see some improvement by switching over to ARMv9. ARM managed to deliver some gains with the Cortex-A715 and X3 cores, for example.

All told, the CPU might deliver a modest 15% improvement in performance. Apple is expected to keep the same core configuration (2 big, 4 small).

The switch to faster RAM is expected to bring a performance boost too – DigiTimes is reporting that the iPhone 14 Pro and 14 Pro Max will use the new LPDDR5 type, which offers 50% more bandwidth than LPDDR4X and is more energy efficient to boot. Both models will stick to 6GB capacity, however.

As for the GPU, the prediction is that Apple will stick with 5-cores to avoid making the chip too big or maybe go up to 6-cores. Either way, the expectation is for a 25-30% increase in GPU performance. 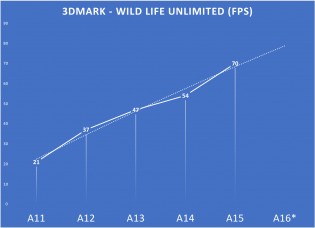 Predicted 3DMark scores for the Apple A16 chipset

Apple will also have to boost the ISP and machine learning hardware to handle the higher resolution – the 14 Pro series is rumored to make the jump to a 48MP camera and 8K video recording. This could also raise the resolution limit of Cinematic Mode from 1080p to 4K.

Finally, Apple is stuck with Qualcomm modems for the foreseeable future, so the A16 chipset will likely be paired with the Snapdragon X65. Whether the vanilla iPhone 14 handsets will also get the new modem is unclear.

New report corroborates that iPhone 14 will use A15 chipset, 14 Pro to use A16

when will apple decide to remove the usb port and physical buttons from iphones?? i am so annoyed with those things

It's "you don't". DON'T. Also, I do. And you're just an anon barking thinking you even know s**t. About anything.

It's not sh#t though? Have you ever tried playing a game without framerate locking at 60Hz? Obviously it cannot be done on a phone since the settings are hard-locked, but a game rendering at 120FPS (or any FPS higher than 60 really) on a 60Hz sc...