Imagine the iPhone 13 but stretched and voila - you get the iPad mini 6. And this is a genuine compliment, as the latest iPhone design may not be everyone's favorite, but it feels just right on a tablet.

The sixth iPad mini is breaking the mold, and for the first time since the "mini" inception, we are witnessing a display swap. Here is what happened - the front Touch ID/Home key is gone, the screen aspect has changed from 4:3 to 3:2, and its diagonal grew larger up to 8.3", while the metal body has shrunk. Indeed, it's a lot to take in. 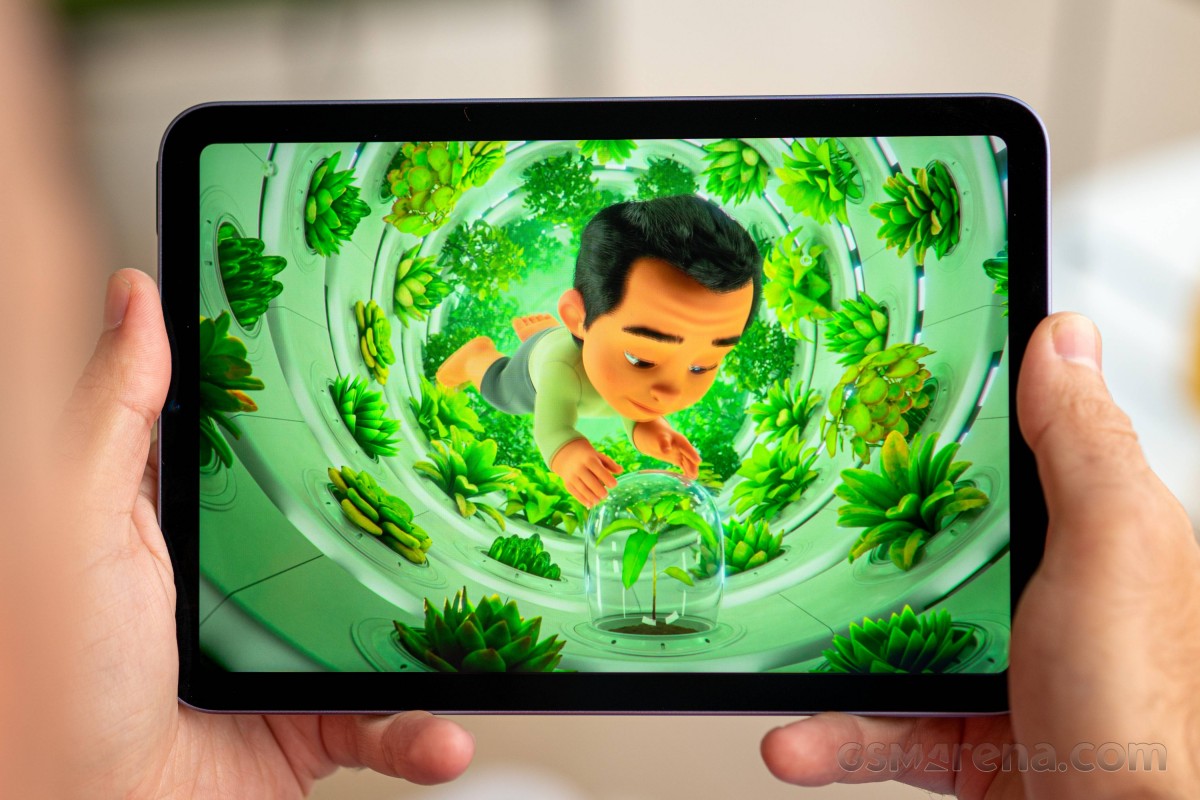 In fact, the iPad mini looks quite modern and we just love the smaller screen bezels, which are now equally thin across all four sides. This is what allows the screen to grow, and yet the iPad can keep the same compact body. Well, this and the new aspect ratio, of course.

So, the iPad mini uses a cool aluminum unibody with a flat back and flat frame. The only curves you can see are the four rounded corners, like all recent Apple designs. And yes, the iPad mini can stand on its own since we know you'd never ask. 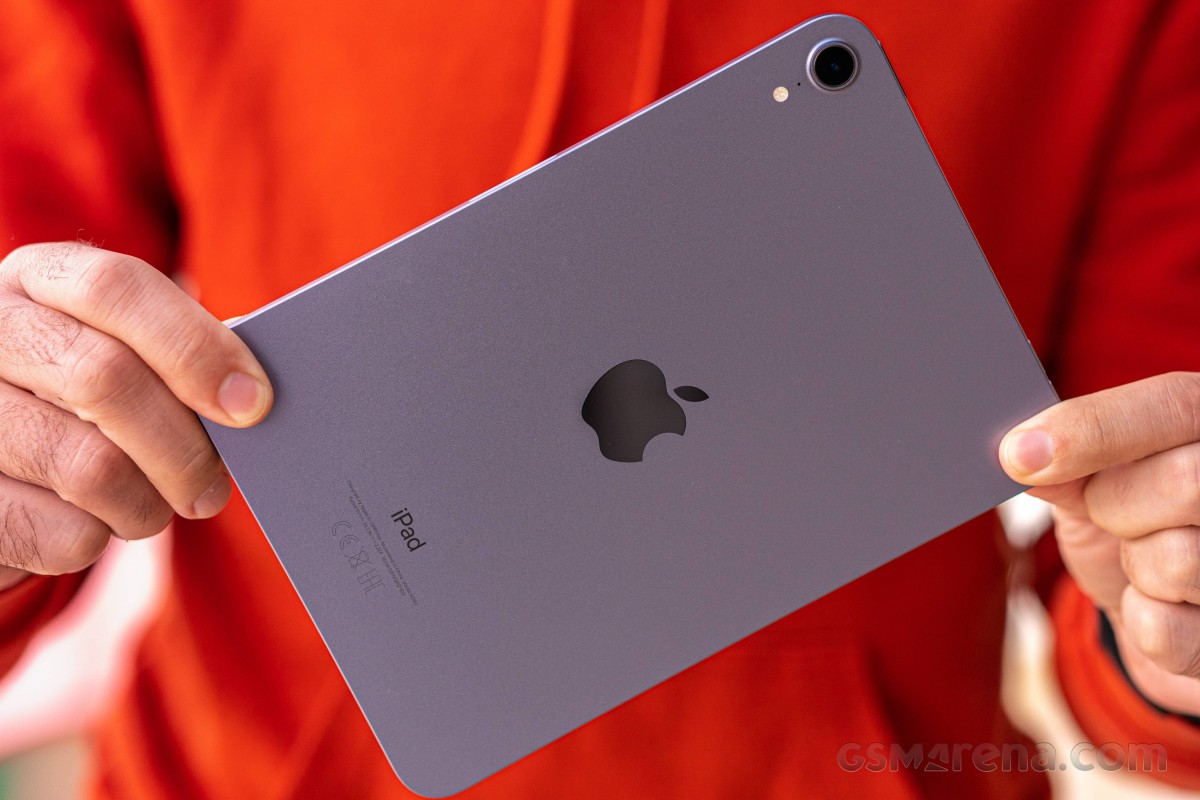 We bought the new Purple color, and it's lovely - not too flashy, more like subtly fresh. You can also get the iPad mini in pink or in the traditional white and gray colors (officially called Starlight and Space Gray). The brushed finish of the aluminum is still prone to fingerprints and smudges; it just takes more time for their accumulation. If you don't like seeing these unpleasantries, you should opt for a brighter color like white or pink.

The front is home to the new 8.3" IPS LCD Liquid Retina display, up from 7.9" diagonal on the previous iPad mini models. It has a smaller frame as there is no Touch ID/Home button and is now with rounded corners. We would have liked an improved LCD panel with HDR, but it is what it is. 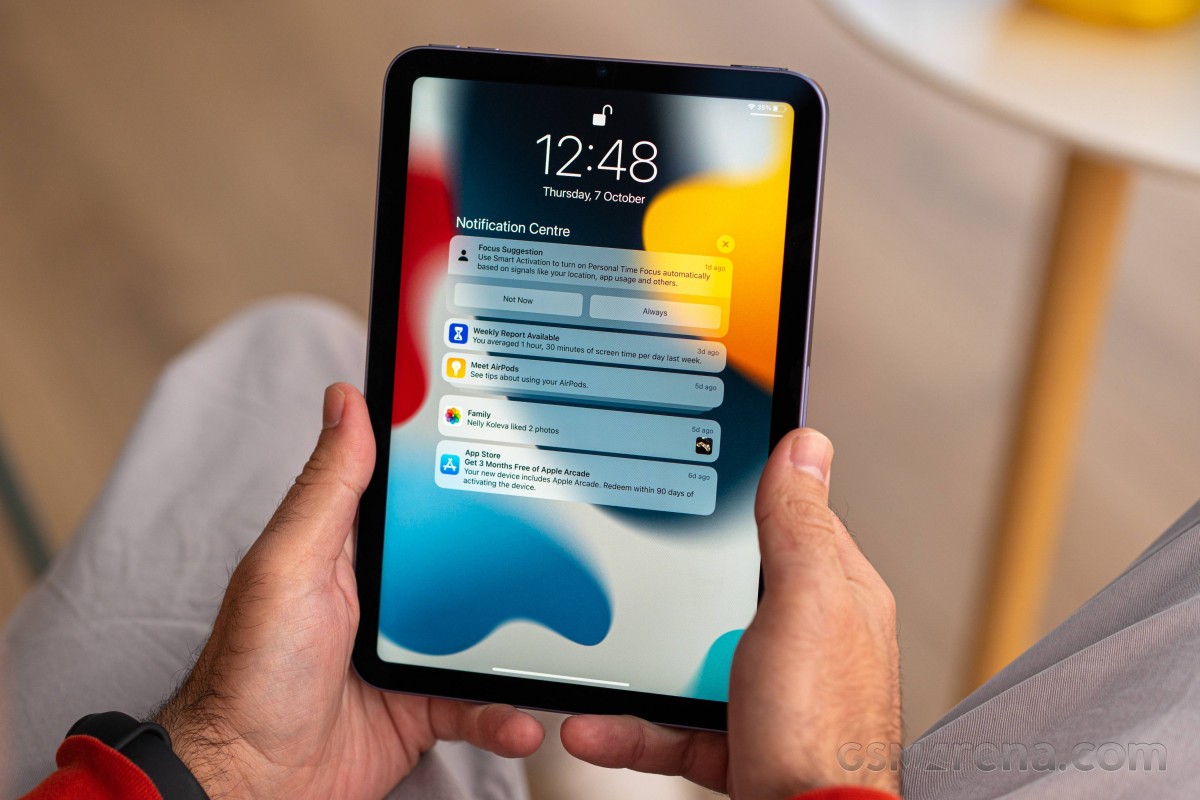 There is a 12MP camera that's barely noticeable above the screen - it's a massive upgrade over the old snapper, with a 14mm ultrawide-angle lens and support for the innovative Center Stage feature.

The display panel is protected with flat tempered glass, which has an additional oleophobic coating for better fingerprint resistance. Not that it eliminates fingerprints, of course, but it is incredibly easy to wipe them clean with the back of your shirt, or even your palm.

The only major interruption on the back is the 12MP rear camera, yet another update over the old iPad mini and its 8MP snapper. The lens is jutting out a little bit, but it won't make the new iPad mini wobble when used on a desk.

Below the camera, you can also spot one of the microphones and a quad-LED flash. 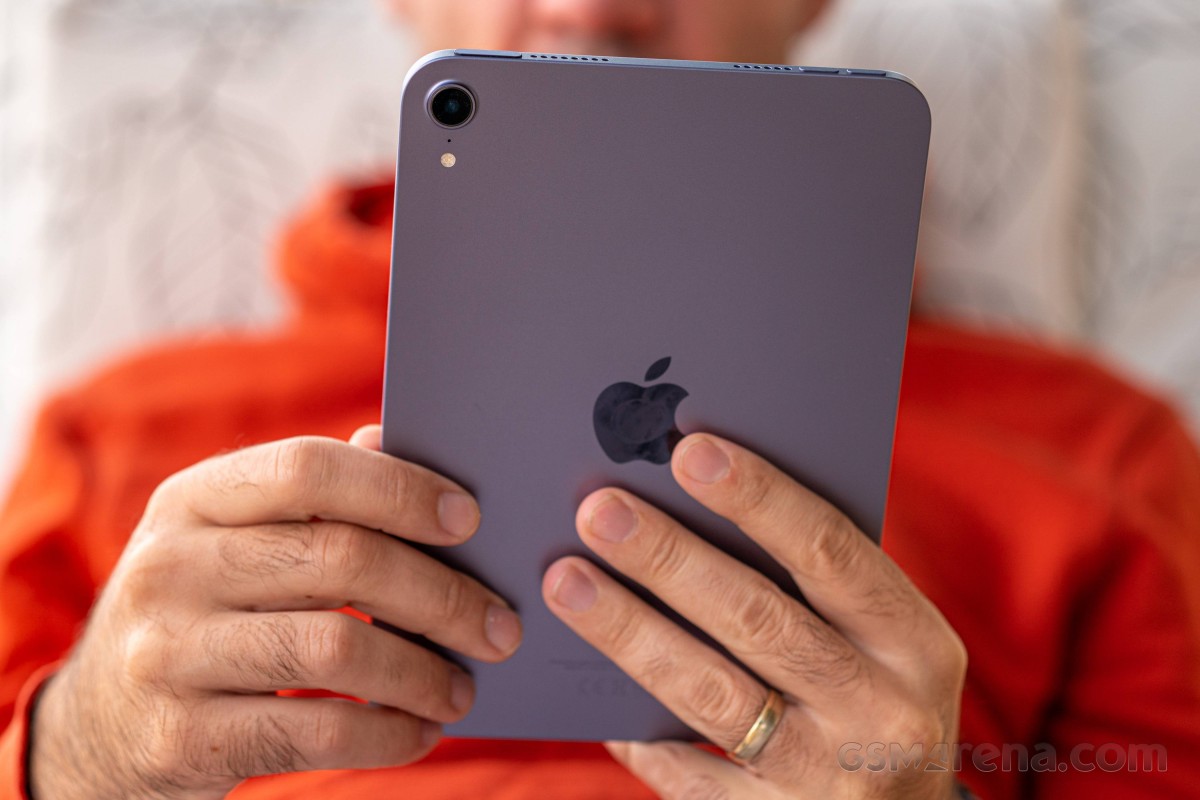 Now, let's look around the sides. For the sake of consistency, we'd explore them as if the iPad mini was handled in portrait orientation.

The left part of the tablet is completely bare, with no controls here.

On the right, you can clearly see the magnetic charger/holder for the Apple Pencil, and this is the only place the pencil clicks should you decide on buying this overpriced stylus.

Left side • Right side

The sixth-generation iPad mini is finally making the stereo speakers matter. The old models had the two speakers at the bottom, around the connectivity port, and even if they were stereo, the experience wasn't right. 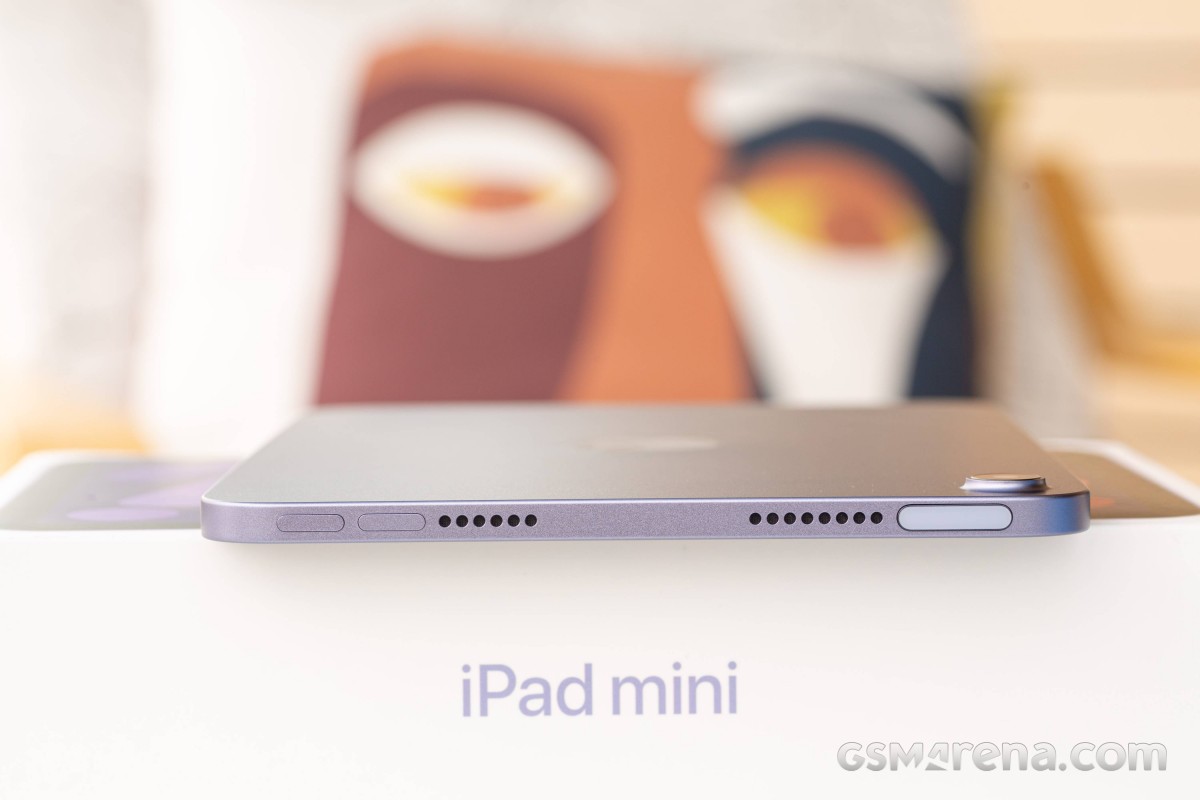 Now, this iPad mini has a proper setup - one speaker at the top and one at the bottom, each behind two grilles. And when you hold the iPad mini in landscape orientation for movies, music or games, you'd experience rich and loud stereo sound. 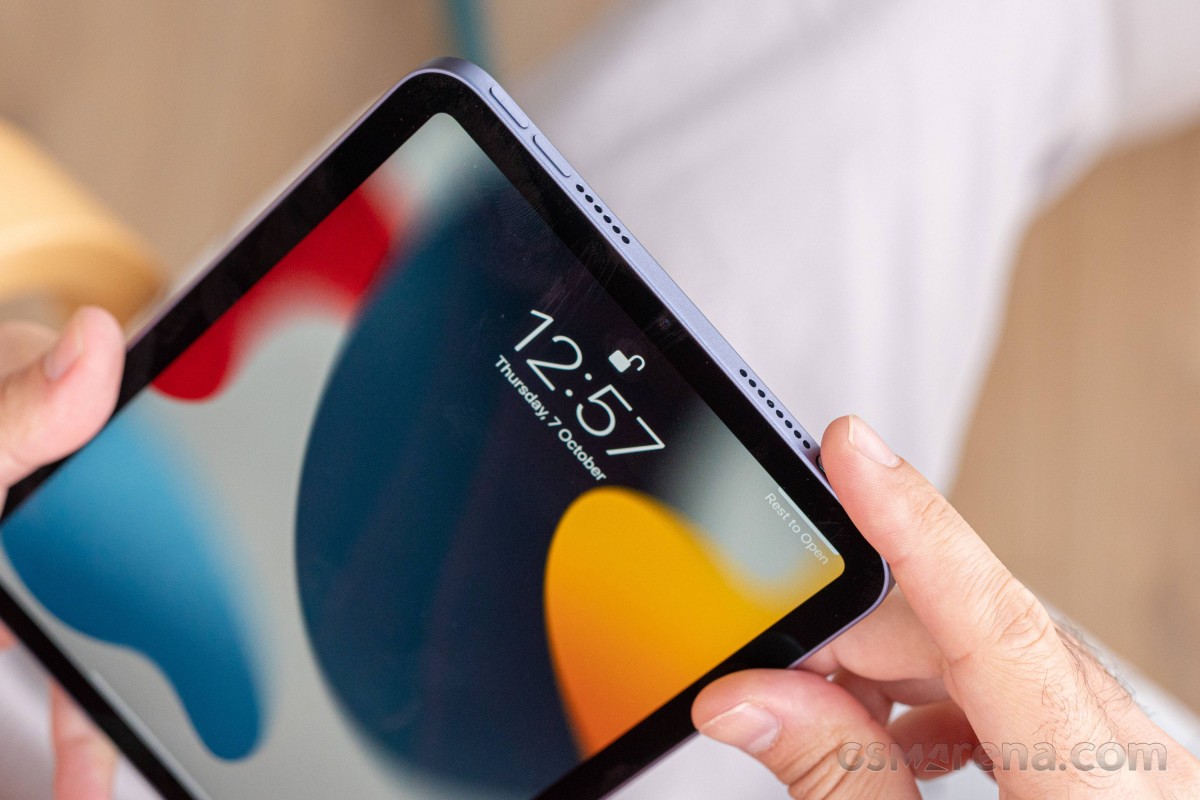 Also, at the top you will find the two volume keys and the Power/Lock button. The latter is also accommodating the Touch ID, and while it' was a bit awkward at first, we eventually grew to like its position and found it convenient. Plus, it's always-on and incredibly fast. 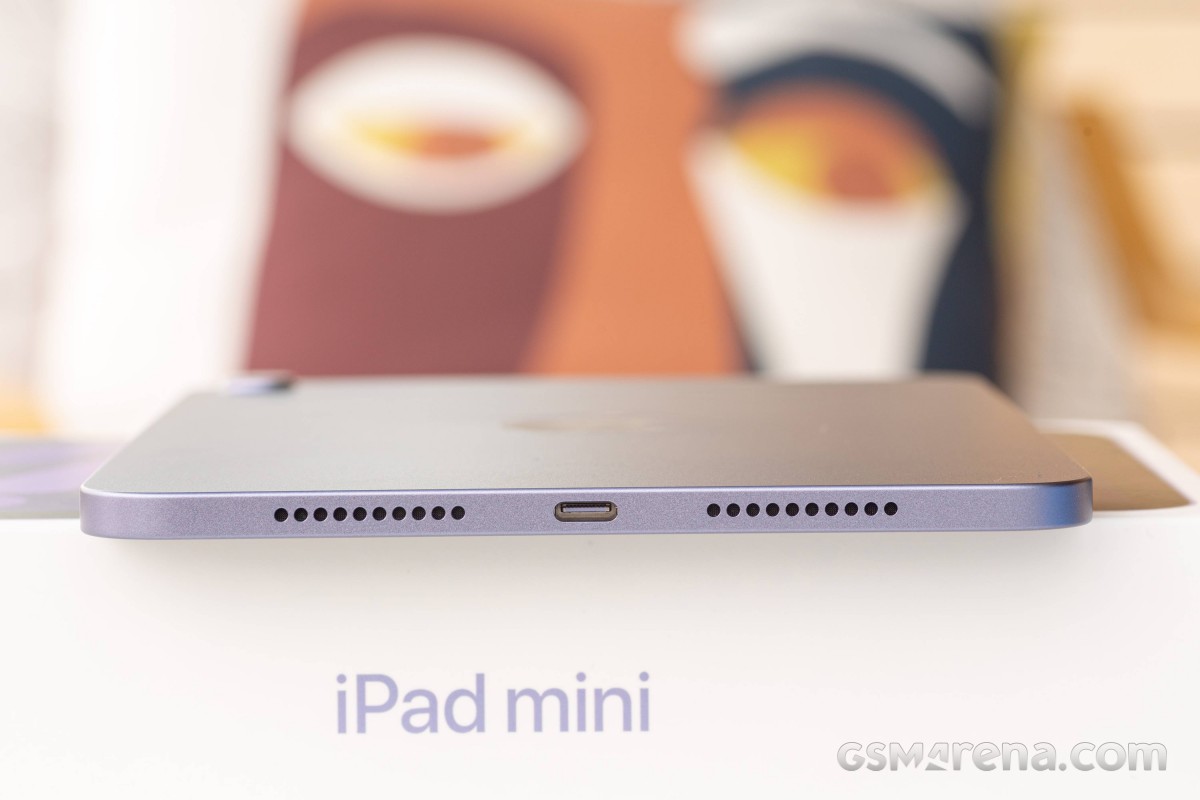 The bottom has the new USB-C port between the two speaker grilles.

Handling the new iPad mini is a joyful experience if you like compact tablets, that is. It's amazingly comfortable and lightweight, with outstanding grip, and it can even fit in some cargo pants' large pockets. We did love every minute spent using it, and design-wise, it gets an excellent mark. 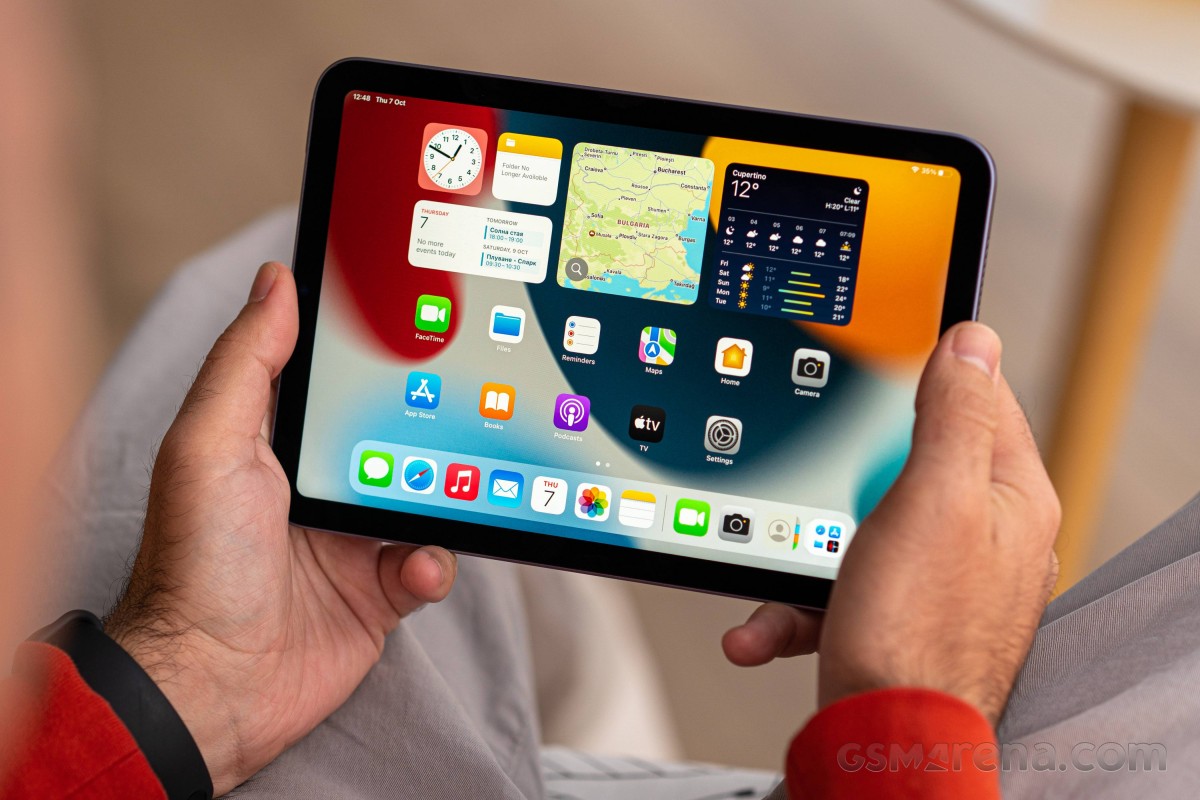 Finally, it's time to reminiscence on the iPad mini series. 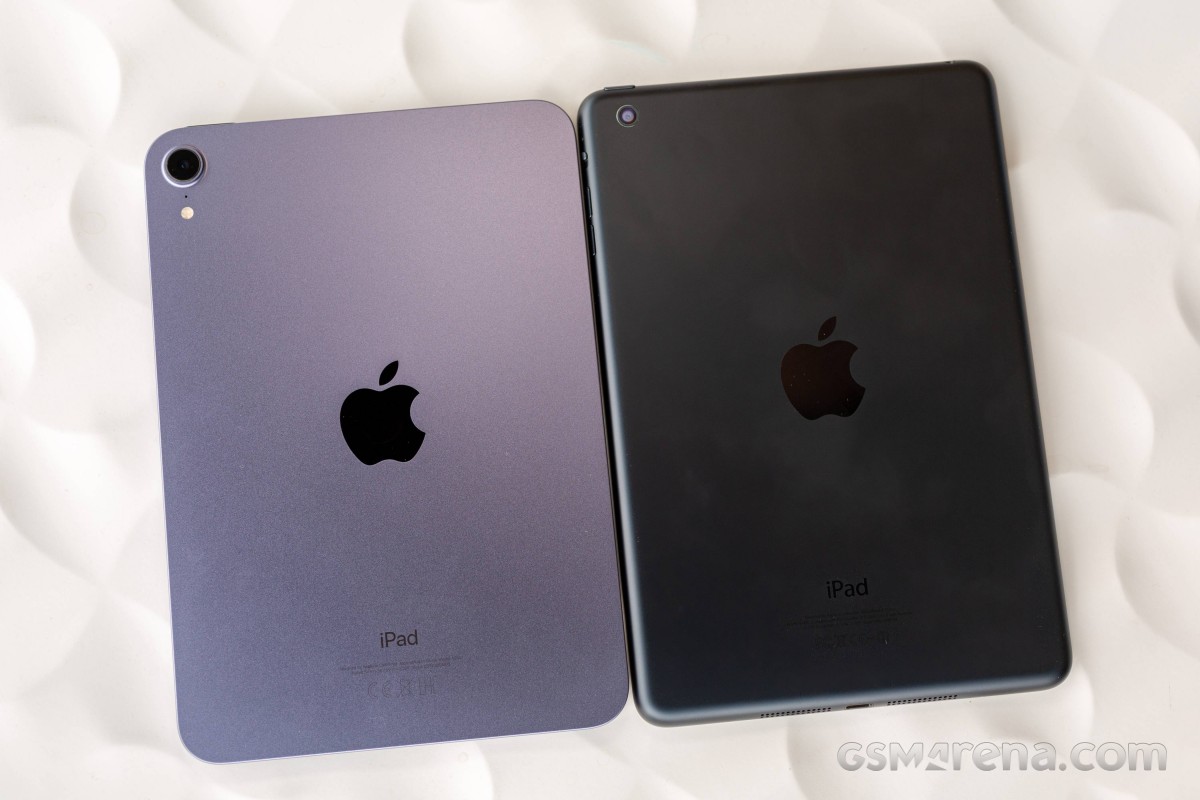 While the latest iPad mini has a taller screen than the previous models, it is a bit narrower by 5-6mm - that's because Apple changed the screen aspect from 4:3 to 3:2. 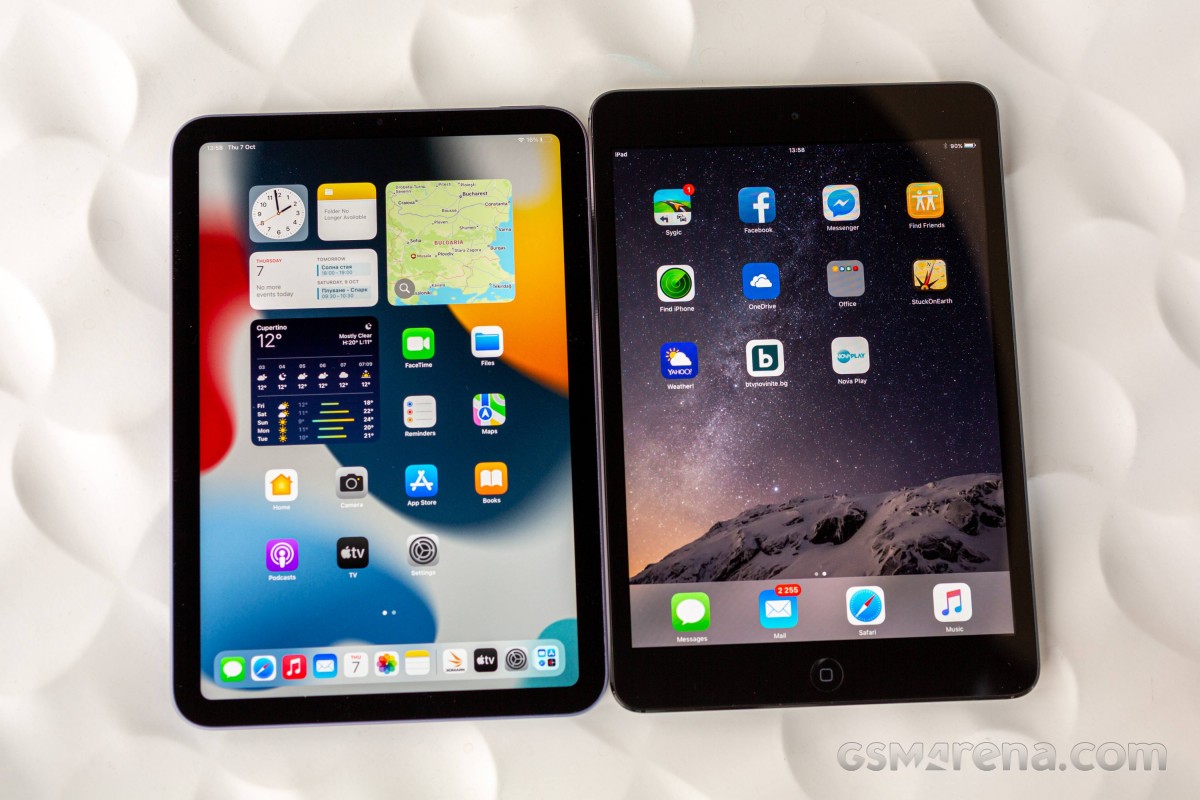 But did we miss these lost pixels? No, we did not. We couldn't really tell the difference until we put the two iPad mini slates side by side. And to be honest, the new mini has a wider aspect that is better fit for watching movies or TV shows. So, we think that Apple has made the right choice and has pushed the iPad mini onto a new, better path.

i want ue that like phone.I want to use this as a phone because the current keys on the phones are so small and the screen. Can be used instead of the phone. Tired of dialing the phone.

"There is also bad news with this transition - the 3.5mm jack is now gone for good." I'm sorry, but I definitely cannot take this sentence seriously. "Gone for good" my bottom! The headphone jack is and always will remai...