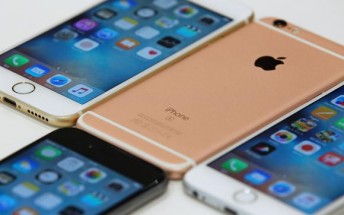 Apple has long been rumored to employ OLED display panels made by Samsung for at least one of the iPhones it's launching this year, and today a new report confirms that.

According to Nikkei, Apple has ordered 70 million curved OLED display panels from Samsung, which will be the only supplier for this part this year. They will be used inside the new iPhone 8 which will be unveiled in the fall alongside the iPhone 7s and 7s Plus. Unlike the iPhone 8, the 7s models will retain the LCD panels of their predecessors, as well as their sizes - 4.7" and 5.5", respectively.

On the other hand, the iPhone 8 is said to employ a 5.2-inch OLED screen, and this model could end up costing north of $1,000. Some analysts are predicting that Apple will sell 55 million iPhone 8 units this year alone. Its success should lead to a record year for Apple. Samsung is reportedly preparing to churn out as many as 95 million panels for Apple in case the demand for the iPhone 8 will exceed expectations.

One "industry source familiar with iPhone design" says all three 2017 models will feature wireless charging, as well as water and dust resistance. The iPhone 8 is to come with a "3D sensor" that will allow for advanced facial recognition, and this device will also ditch the physical Home button as rumored countless times before. The 7s models will keep the button, but they might sport the 3D sensor for facial recognition too.

Apple Clips will make videos with effects and Live Titles

Wait for OLED iphone 8. I think it is worth it. I am not impressed with S* or S8+ at all! it is very strange mobile. Not pleasant at all to read any content on S8/S8+. Or maybe the Mi Mix 2?

Because android phones are constantly changing, making any older version of say a samsung line obsolete within a certain time frame. Apple change a couple of little things on their phone and call it innovative. Also by this point having an iphone is ...