Apple sold the most premium ($400 and up) smartphones in 2018 according to new Counterpoint Research data. A new entrant - OnePlus cracked the prestigious rankings for the first time in its brief history. Overall, the premium segment grew by 14% year on year, despite the slumping global smartphone market which saw a 3% decline.

Chinese OEMs Huawei, Oppo, and OnePlus have all expanded their presence, as established players Samsung and Apple lost some share.

Apple still dominates with its 51% share, followed by Samsung with 22% and Huawei with 10%. Thanks to strong sales of its P20 and Mate 20 series, the Chinese manufacturer saw a 97% year on year growth. OnePlus was the fastest gainer in the $400-$600 segment thanks in large part to record-setting sales in India. 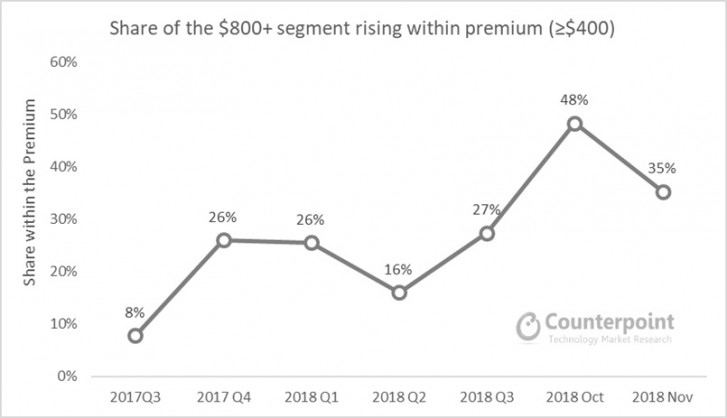 The ultra-premium ($800 and up) was the fastest growing segment and it's the one where Apple's dominance is most pronounced - it accounts for nearly 80% of the phones sold. The report says that buyers are content with paying more for devices as long as they will be able to use them over a longer time period. Researchers expect the premium segment to grow thanks in large to 5G and foldable devices.

Overall smartphone market is in decline, but the premium segment goes up

Where do I start maan, so much wrong information in one article... Are you modern version of fake news app? First of all, one plus sells it's phone at 35-37k for 128 GB variant . That is literally half of what apple is asking for iPhone xr 64 gb. ...

I never considered Apple as a premium phone manufacturer.

Huawei is the real premium threat to Samsung and Apple