Apple is testing its upcoming 14-inch and 16-inch MacBook Pros with the as-of-yet unreleased M2 Max processor. So far, Apple has released the new-look MacBook Air and the very-old-look 13-inch MacBook Pro with the M2 processor, and the M2 Pro and M2 Max laptop processors are the logical next in line (with an eventual M2 Ultra for the Mac Studio).

Two Geekbench runs reveal a MacBook with an M2 Pro processor and 96GB of RAM. The figure means that Apple will likely allow buyers to configure more than the current 64GB max option.

The M2 Pro processor has 12 cores, running at a max of 3.54GHz, which is 2 more cores and 320Mhz faster than the M1 Pro in current-gen MacBook Pro laptops. The listed L1 and L2 cache figures are the same. 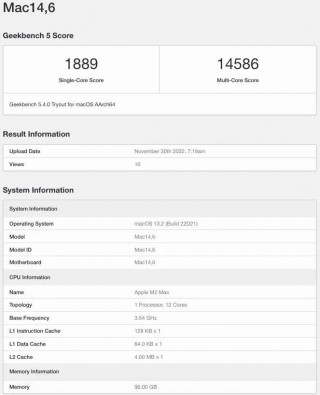 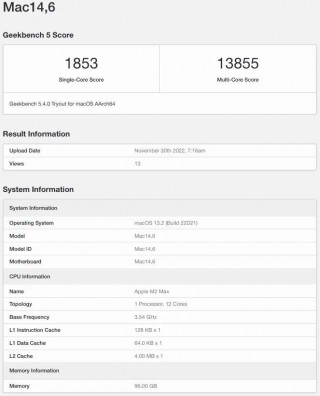 Apple was expected to unveil the M2-powered 14-inch and 16-inch MacBook Pro's in the Fall but given that we're now fully in winter, they could be delayed until 2023.

Samsung wants to get in on the Apple M2 chip production

The highest specs Macbook can't even see the lace of any high-end windows laptop other than battery life.

That's only the case for full desktop setups, in case of laptops macs really outperform any laptop windows has to offer.

Due to optimization and dev support? Kid doesn't know the RAW power of windows machine isn't even in the same league of Apple. Apple just can't stand with a tiny chance.