The Asus Padfone 2 slides into its docking station effortlessly, but thanks to cleverly designed locks it fits firmly in place once it's there. Even if you turn the docking station upside down and shake it vehemently the smartphone won't fall off.

The docking station itself packs a 10" screen, with a video-call camera sitting right below it. There's no need for another camera at the back as you can use the smartphone's 13 MP shooter when it's docked.

There's a front-facing camera above the screen

On top you get the power button, while the volume rocker is on the left side of the tablet body. Another 13-pin port sits at the bottom, while the back hosts the loudspeaker and the microphone pinhole.

Asus has put a lot of effort into optimizing the audio output of that loudspeaker and it shows. The company has developed the SonicMaster technology together with Bang&Olufsen. It's not quite perfect, but it's certainly better than just about every other tablet loudspeaker we have heard.

The Asus Padfone 2 comes with a 4.7" Super IPS+ display with a resolution of 1280 x 720 pixels. This comes down to a pixel density of 312ppi - not quite as good as the recent wave of 1080p flagships, but the perceivable difference is minor.

We love the Asus Padfone 2 screen

The screen of the smartphone boasts good brightness and great contrast, along with decently vibrant colors. The viewing angles are impressively wide and the overall image quality is generally very pleasing. Sunlight legibility turned out surprisingly good, as seen in the chart below.

We have seen slightly better (the HTC Butterfly, which we reviewed the other day springs to mind), but the Padfone 2 screen won't let users down. Besides, Asus claims that thanks to the technology used this is also one of the most responsive smartphone screens around having an average touch response time of 65ms, compared to Galaxy S III's 85ms and HTC One X's 75ms. Of course this is not the kind of difference you can feel in real life, but what's important is the Padfone2 is as responsive as a proper flagship smartphone should be.


The docking station is an entirely different story, though. With fullHD screens available on phones, 1280x800 pixels on a 10"display is bound to result in mediocre image quality.

The screen on the docking station is hardly exciting

The contrast of the screen is not bad and its colors are okay, but the pixilation is pretty obvious. After all, you when you slide the Padfone 2 in the docking station you gain more than four times the surface and yet you only get 80 extra pixels on one of the sides. The difference in the pixel sizes on the two screens is pretty big, as you can see in the two images below captured with our digital microscope. 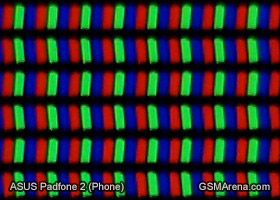 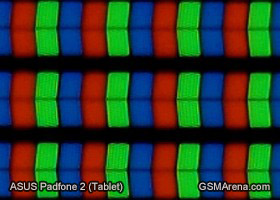