The Asus design team started off the Zenfone 6 project by settling on a screen size. The 6.4-inch 19.5:9 aspect display offered the best possible compromise between display area and ease of use, the last bit being dictated mostly by the width. 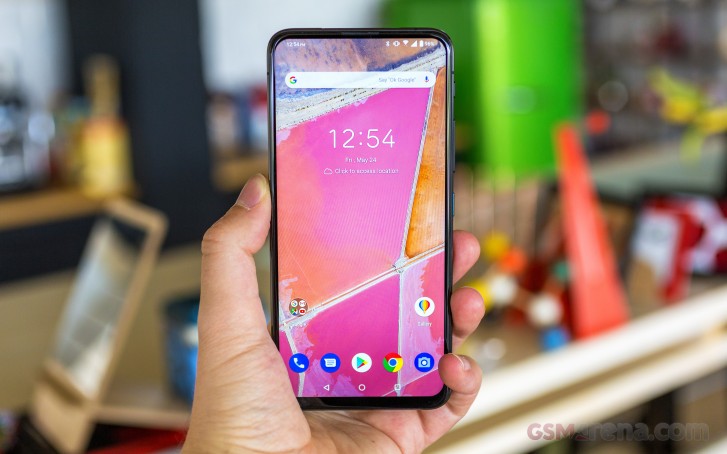 The IPS LCD is near bezelless, with a minimal frame on the sides and the top, and a slightly thicker chin. If you go out of your way looking for it like we do, you may notice the top bezel is marginally thicker than the sides. If you're a normal person, you probably won't notice it and/or care about it.

Asus has fitted a conventional earpiece which moonlights as a secondary loudspeaker. There are the usual ambient light and proximity sensors to the right of the earpiece, plus an RGB LED status/notification light.

The front of the Zenfone 6 is covered in the latest Gorilla Glass 6 for scratch and shatter resistance. 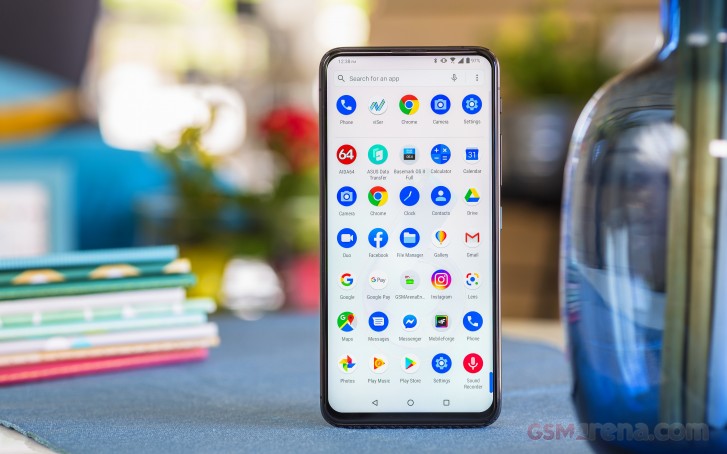 You can't miss the lack of a seflie camera notch or punch hole, or any such in-between solutions. Asus has handled this gracefully by fitting that rotating main camera on the back. 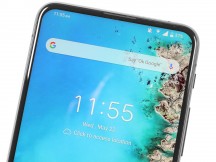 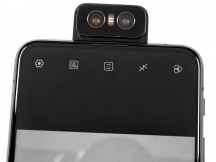 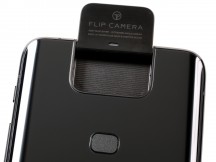 The motorized camera is the Zenfone 6's standout feature, but Asus insists it's a byproduct of other decisions instead of being conceived this way. Well, we like where the development process got them.

The Flip Camera (capitalized, as it appears Asus is treating it as a brand) consists of two modules mounted on a rotating platform. It's made of liquid metal, an alloy which Asus says is 4x stronger than steel. The platform is driven by a stepper motor which together with its gearbox occupies a large portion of the right 'horn' on the back - we'd go ahead and call the whole thing 'huge', because that's what it is in smartphone terms. 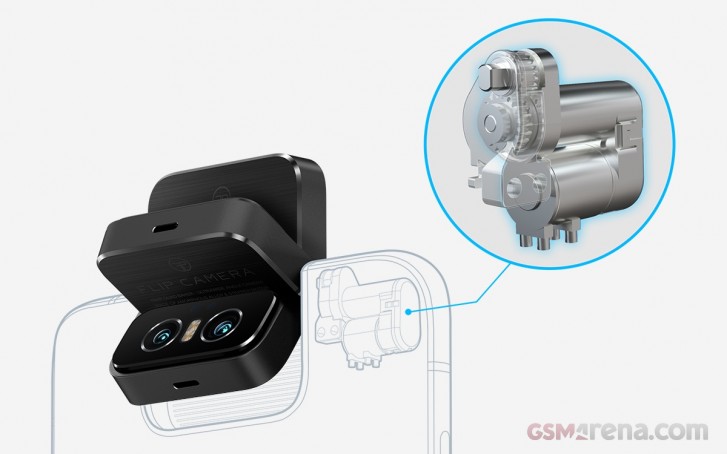 The combination of a big battery and a camera assembly that takes up more than the usual amount of space created additional challenges when it came to the internal design. The solution was a two-piece stacked motherboard in the space above the battery and surrounding the camera. This is, of course, of little significance to you as a user, but it just goes to show the level of effort that went into the Zenfone 6's design. 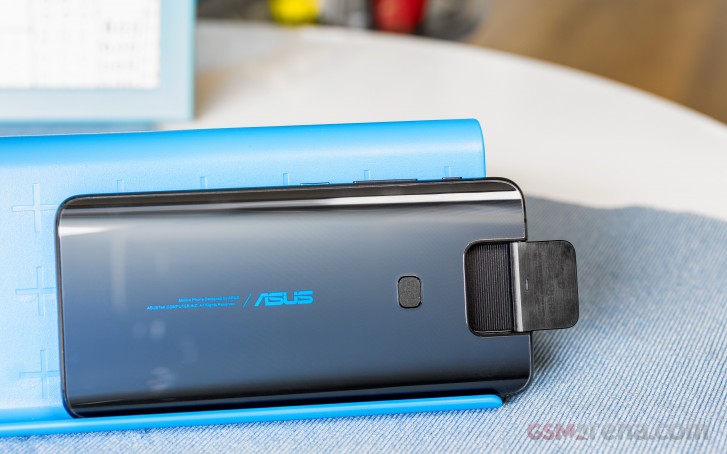 For all its uniqueness, the handset does feature a conventional capacitive fingerprint reader on the back. Under-display sensors only work with OLED displays and the Zenfone 6's target price didn't allow for that. We rather enjoyed the experience with this sensor - it's well positioned and works quickly and reliably. 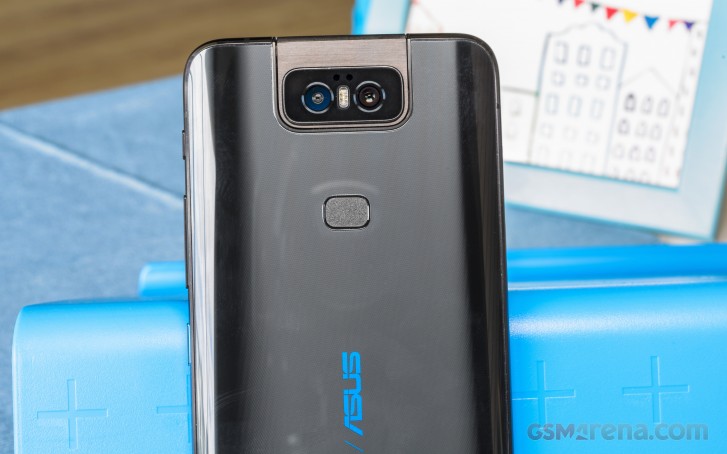 The back of the phone curves to the sides, making it feel more compact than it is. It measures 159.1x75.4x9.2mm which is an average footprint for the display size and slightly thicker than most. It does have that 5,000mAh battery to show for the extra thickness and that's a tradeoff we can easily applaud.

Looking at that 360-degree spin you probably spotted an extra button on the Zenfone - that's the Smart Key up top. By default, it's used to summon the Google Assistant but is customizeable to do other things. More about that in the software section, but let's just mention here that its high placement is both bad (not easily reachable with one hand) and good (unlikely to get triggered accidentally).

There's an oversized power button above the midpoint on the right with a blue accent to match the logo on the back. The volume rocker is above it. All the buttons click nicely, there's no mushiness or anything. The Smart Key additionally has four pimples giving it tactile distinction from the other buttons. 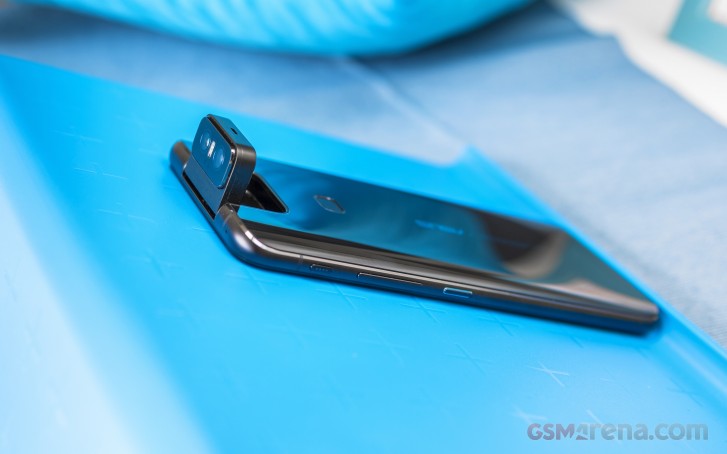 On the opposite side you'll find the card tray, which takes two nanoSIMs and a microSD at the same time. Dedicated memory card slots are our favorite. We're also fond of headphone jacks and the Zenfone 6 has one, on the bottom. That's where the USB-C port is too, as well as the primary mic and the (primary?) loudspeaker. 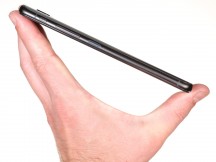 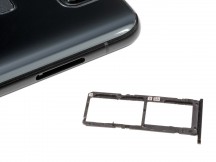 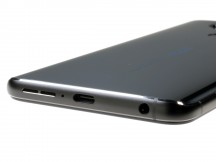 All controls on the right • Triple card slot • Connectivity, plus mic and loudspeaker on the bottom

Sadly, the Zenfone 6 lacks an IP rating. That seems easily explained by the presence of moving bits that make sealing the body way tougher. On top of that, having dust and water protection on a phone is this price bracket is anything but a given, so we're not sure we should hold that against it.