Xiaomi’s Black Shark 2 gaming phone will be unveiled on March 18. The phone is the first in the series to use the Snapdragon 855 chipset (the original and Helo used the 845) and will have 10GB or 12GB of RAM. The performance will be bolstered by the new Liquid Cool 3.0 and fast charging will be upgraded to 27W (up from 18W). 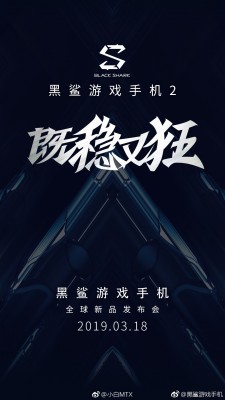 The Black Shark 2 will be unveiled on March 18

As part of the promo campaign Xiaomi has set up a “top secret experience” in Shanghai. The slogan of the phone is “both steady and mad”.

The Black Shark 2 will likely launch in China first and should be available in Europe eventually. The brand is also setting up offices in India, so that’s another potential market.

PS. if you follow the Source link to Weibo, you’ll see that the the brand’s CEO posted the image from a Black Shark 2.

Black Shark 2 to have Liquid Cool 3.0

Is it front facing stereo speakers onboard ?