Now this is interesting – the Bluetooth SIG certified the SM-N986U under the name “Samsung Galaxy Note20 Ultra”. Previously, an analyst examining Samsung’s supply chain claimed that there will be no Note20 Ultra, just the vanilla Note20 and the Note20+.

This isn’t a new phone, but previous rumors called it the Galaxy Note20+. The model was spotted at Geekbench, leakster Ice Universe claims that the phone will be powered by an unannounced Snapdragon 865+ chipset based on that result. The 3C certified the Chinese model, SM-N9860, and revealed that it has a 25W wired charger. 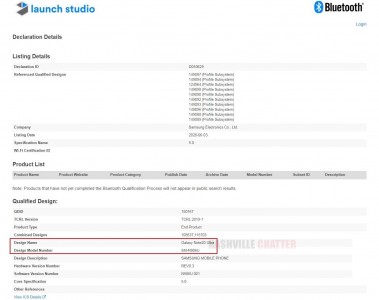 This means that N986 should have been a Galaxy Note20+, though Samsung may have decided to rename it to “Ultra” instead. Or the Bluetooth SIG posted the wrong name (it took down the page, we’ll see if it reappears).

Source (page taken down) | Via

I'm middle class and not rich. The phone is easily obtainable from a financial standpoint. Stop bitching

This phones are targetted rich people, ShameSong's S series and Note phones are became a dream most of people. And their phones ugly as hell...

Man i have my Moto X4 since beggining of its sales. Before i had Lenovo Vibeshot which came out at summer 2015 but i gave it to my friend when his Samsung galaxy Young died. So i can say i have my phone for like 2 and half years but the Vibeshot i...