We traced the “Gigahertz wars” in a previous Counterclockwise article. It veered off into counting CPU cores because mobile chipsets hit a wall, just like desktop CPUs did a decade earlier. It’s a simple, but unforgiving equation – increasing the clock speed by 10% increases power usage and heat by more than 10%.

Back in 2017 (when the article was published), the highest clock speed we reported was 2.6GHz. Since then we’ve had our first 3GHz mobile chipset – the binned Snapdragon 845 inside the Asus ROG Phone. Okay, it’s 2.96GHz if you want to be precise, but we’re going to be squint a little and count it.

Chipset designers seem to have hit another wall. The first 10-core CPUs appeared back in 2016, but that’s as high as we ever got. In fact, if you look at the chart below, you’ll see that these 10-core designs were a short-lived fad. 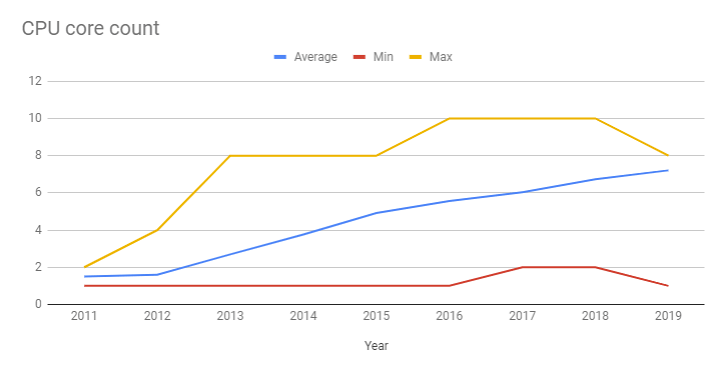 Almost all phones today have 8-core processors, the only exceptions are feature phones and the most affordable entry-level smartphones. And the iPhones. But ever since ARM introduced the big.LITTLE design, the composition of those CPU cores is more important than the count.

We’ve seen various combinations, the most common being an even split – 2+2 or 4+4. However, those were not the optimal designs and chipset makers have re-balanced the equation.

For one, the old 4+4 CPUs are going away, with 2+6 becoming the preferred setup for octa-cores. The Cortex-A75 and A76 are larger and more powerful than the A72/A73 that they replace, so only premium chipsets could afford to have four of them.

And even then it’s not so simple. The most recent flagship chipsets have specialized cores – the Kirin 980 adopted a 2+2+4 arrangement, the Snapdragon 855 chose 1+3+4 instead. This gives the chipset 1 or 2 high performance cores, a second layer of fast cores and finally the power efficient “little” cores. 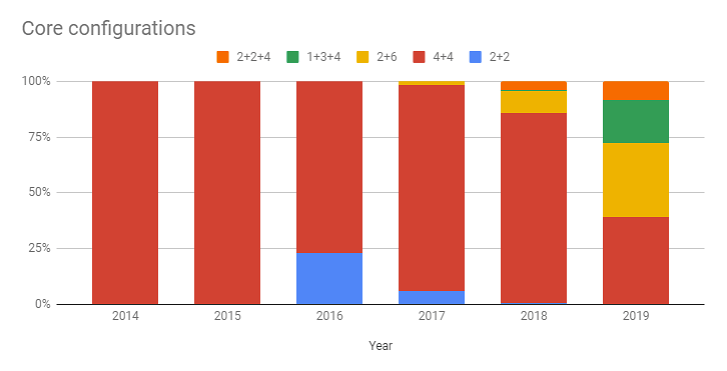 A die shot of the Kirin 980 showed that there are two versions of the A76 core – one optimized for 2.6GHz and one for 1.92GHz. Much like car engines have torque curves, a CPU core can be optimized to work most efficiently at a certain frequency. That’s exactly what’s happening here.

ARM’s DynamIQ platform supports up to 32 clusters with up to 8 cores per cluster. This gives chipset designers a lot of flexibility going forward to fine tune frequencies and core voltages to get a better mix of performance and power efficiency.

However, we doubt we’ll see more than 3 clusters soon as the focus is now elsewhere – with the addition of NPUs and more powerful ISPs, most of the heavy processing is handled by specialized hardware instead of the CPU.

We could be wrong, though - what if ARM introduces Cortex-A6x cores to sit between the A7x and A5x?