Once upon a time, Nokia ruled the phone world – in the early 2000s, the Finnish company received the overwhelming majority of fan interest. We sifted through our database to track the rise and fall of the Finns and other brands.

You can see the cliff – 2010. That’s just before then CEO Stephen Elop posted the infamous “Burning Platform” memo and effectively pulled the plug on Symbian – the most popular smartphone OS at the time (and by a wide margin too).

The Lumia 800 brought Windows Mobile to the stage in late 2011, but by then it was already too late. Symbian’s downfall made room for Android’s rise and the company never recovered.

You can see a small red sliver appear, those are the Microsoft-branded Lumias. They were barely a blip on the radar. In 2016 a new company took on the Nokia mantle, HMD, and you can see popularity start to rise again.

Sony and Ericsson handled things much better. You can see the cranberry and purple colors combine in 2001 to form a joint company. That partnership was dissolved as Sony acquired Ericsson’s share in 2012. 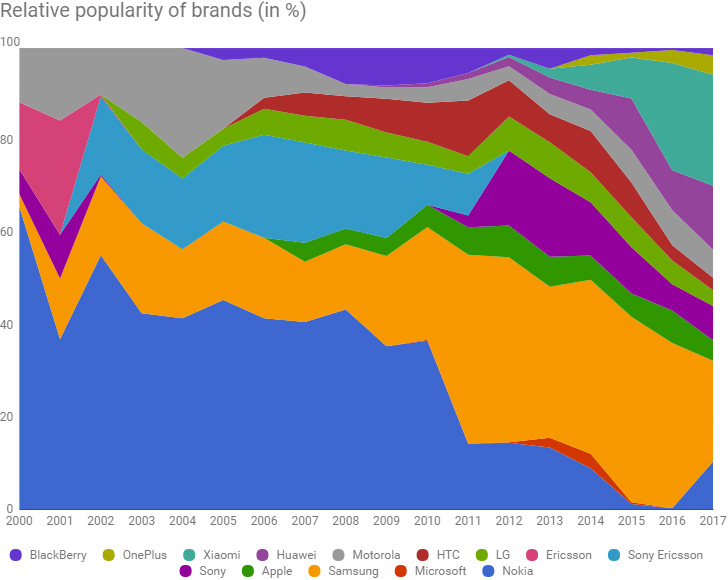 HTC started life as an ODM and its XDA devices for O2 inspired the name of the well-known XDA-Developers forum. Around 2006, HTC started selling under its own brand and and quickly became known for its premium quality. The brand is waning now and looks to VR to help carry it into the 2020s.

You can see brands from China come into prominence. The giant Huawei investing a lot of effort (and money) to make its presence felt in the western markets. Newcomer OnePlus worked on a budget and instead rode the hype train of a successful social media campaign.

Still, it has nothing on Xiaomi, which has proven an expert in self promotion and is one of the most popular brands at the moment. Compare it to Motorola, which practically invented the cell phone.

Apple didn’t even need social media, people were lining up on the streets (even sleeping in tents) to get the latest iPhone. It feels like the brand has cooled off recently, perhaps people are getting tired of the pricey yearly upgrades. Or perhaps mid-rangers became too good (and Apple doesn’t do mid-range).

If you take one thing away from this chart, let it be this – we have more variety now than ever before. And don’t ever, ever, ever say that you are about to kill your most popular product.

I don't buy the ULC-cost phone contain unenjoyable features and design, so I sticked to Nokia instead.