Hours after IDC published its report on global smartphone shipments, Counterpoint also sent out a press release with its findings. The readings are similar and confirm an ongoing trend - Huawei keeps gaining market share and has just reached an all-time high piece of the shipments pie - whopping 17%.

However, the total shipments are 345 million or 5% less than an year ago, revealing a declining demand for new smartphones.

Huawei was really proud when it became the second biggest smartphone company in the world and announced plans that it wants the top spot by 2021. It looks like the Shenzhen manufacturer is poised to snatch it, unless something catastrophic happens. Looking at Samsung and Apple, they lost respectively 1% and 2% of market share, meaning Huawei devoured smaller competitors.

The rest of the Top 5 is completed by Xiaomi, which kept pretty much the same amount of devices shipped YoY, and Oppo, which saw a 10% increase. The other BBK Electronics’ subsidiary vivo also deserves a mention with the staggering 27% grow. 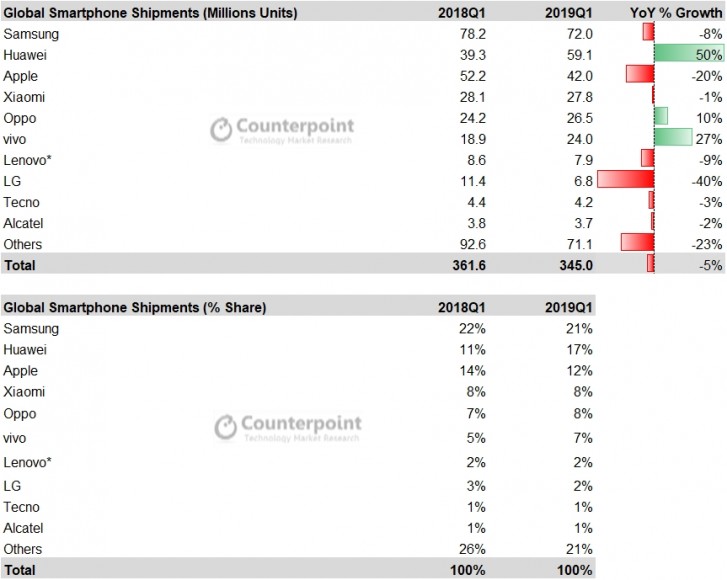 In absolute numbers, Samsung shipped 72 million phones, Apple moved 42 million iPhones, and Xiaomi, Oppo, and vivo also kept an eight-digit tally. They all account for 245.1 million shipped devices, which is over 70% of the global amount.

The market is clearly marginalizing with every quarter, with former megastars like HTC and Sony nowhere to be seen today, and LG slowly following their path with a 40% drop in just a year.

You realised that you just said nonsense. You can get better stuff than Apple yes, but not Samsung or Huawei they leading, in everything

Keyword is mindshare, Apple, Huawei & Samsung is not best at anything really you can get better stuff from less popular brands often CHEAPER and yeah its sad people flock to what the majority see as trendy to buy rather than using Google or Duckd...

Well Huawei is de wei, you cannot go off the wei. :3

New Redmi gaming phone arriving on April 27, will be part of K40 series