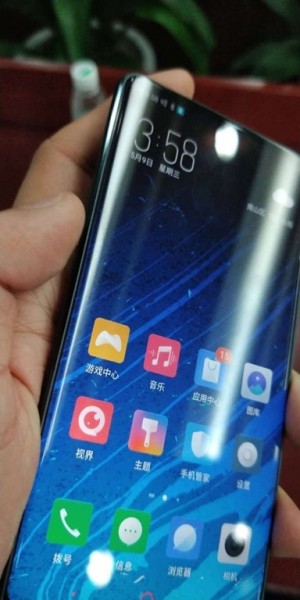 The Chinese company nubia declared a war on bezels far before most of its rivals. It started with the Z9 that was onboard all the way to the Z17 where the bezels use light refraction to make it appear that the display stretches to the very edge.

A poster from earlier this week revealed the company is ready with a new iteration of its display technology, and thanks to a leaked photo of the nubia Z18, we know what the Full Screen 3.0 will look like on the next flagship.

The side bezels seem curved, with the screen pushing against the metal frame. It practically has no bezels on both sides and the top, but sadly, lighting falls in such way that we can’t see if there will be a notch.

On the bottom we see a red virtual home key, meaning the chin of the Z18 will also be extremely small and significantly slimmer than the bottom bezel of the Z17s. Sources say the phone will also have Snapdragon 845 and 8 GB RAM, but no other specs have been confirmed just yet.

The nubia Z18 is expected to arrive in June. Although it will keep the nubia UI for its domestic market, we hope the global units will switch to Stock Android, as promised back in March.

RIP to one of the most promising smartphone companies out there. These guys have made some truly unique creations in their time and the phone in this pic is probably no exception. Better than all those hundreds of copy cat brands out there. A big los...

Considering ZTE froze all major operations, it might not go as planned...

Nubia is a ZTE company and all the components aquisition is common. So, they are in trouble too